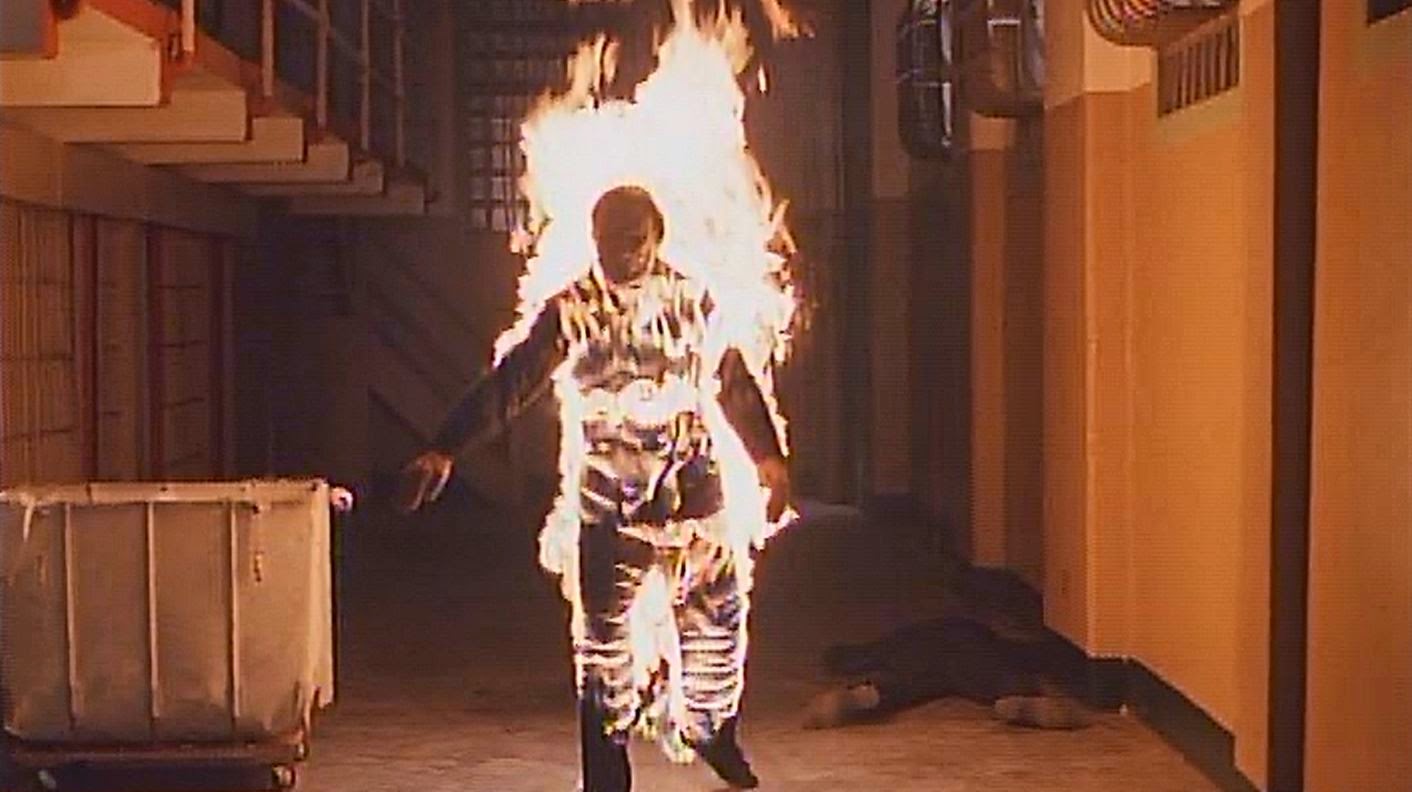 Another Lustig movie about a vigilante… I definitely know that Lovelock and Starkwell head into this one with the expectation bar at least somewhat raised.  They enjoyed the first installment, and they definitely like some of writer Larry Cohen’s other endeavors, such as “The Stuff”.  While they found “Uncle Sam” to be a bit of a stinker (I mean, how many times can you re-brand the same movie), this one came in well before that, so maybe it won't feel quite so tired.  Also, I mean, come on, Bruce Campbell is in it.  So, yeah.

Starkwell: I always thought Campbell was kind of a Streisand, but he’s rocking the shit in this one.

[Maniac Cop drives a truck off a pier with Campbell hanging onto the side of the truck.]

Starkwell: I miss watching movies where you get to spot the stunt doubles.  Nice wig!

If you haven’t seen the first one, all you really need to know is that Maniac Cop is a vigilante zombie cop who just don’t know when to quit.  Something tells me that, although he just took a huge pipe through the chest, he’s coming back.  The something telling me that, is that this is called “Maniac Cop 2” and we are only two minutes into the film.

[Maniac Cop stops an armed robbery, but kills the clerk and gives the gun back to the perp.]

Starkwell: What’s with all the smoke?

Lovelock: Will there be a story in this movie, or… ?

Bruce Campbell and Blondie are arguing with the police commissioner about whether or not the Maniac Cop really is the undead dude they think it is.  Blondie starts FREAKING OUT.  Then five minutes later they kill Campbell and the guys are all “DA FUCK”.

Starkwell: Is it really necessary to focus on the dead naked girl’s boobs for so long at the morgue?  They’re there to identify Bruce Campbell’s body…

There doesn’t seem to be any real method to Maniac Cop’s madness.  I mean I get that he killed Bruce Campbell, but the guy in the corner store?  Now a cop towing away some douchebag’s car?  What the shit?

[Maniac Cop throws Blondie through a window and then she goes after him with a chainsaw.]

Starkwell: What does she expect to do with that?

Lovleock: I don’t know but she has some seriously crimped hair.

Then the Police Psychologist Woman, handcuffed to a car’s steering wheel goes flying down the highway… on the outside of the car.  Say what you will about the movie, but there are some pretty righteous car stunts littered throughout.

Starkwell: Why is this scene so long?  Why are the strip club scenes always so long?

Lovelock: Like you don't know.  More important is, who is this fucking guy they are focusing on?

[This movie is developing a side story now, even though the main story is barely developed.]

So the guy at the strip club is a Serial Killer who’s been killing strippers.  As he is about to kill another stripper in her apartment, Maniac Cop show up, throws the girl into a wall and saves the Serial Killer from the police.  Seriously, what the fuck, they become buddies and plan to kill together?

Lovelock: I feel like the theme from “Perfect Strangers” should start playing, at this point.

Then there is a flashback to how Maniac Cop died in prison, and for whatever reason, it just had to be in “stabbed while naked in the showers by some shirtless inmates”.  So we get plenty of Robert Z’Dar ass shots and some almost side peen.  Why did it have to be in the shower?  And why were the prison showers so dark, open and cavernous?

[The cops go around to some neighboring strip clubs to look for the guy.  They find him at the first strip club they go to.]

Lovelock: How did this guy manage to kill so many strippers and get away with it if he is so dumb?  FUuuUUCK the cops in this movie’s universe are inept.

Then Maniac Cop goes to the police station and kills basically everybody and frees his Serial Killer Buddy.  It’s a fair amount of bullet action and gore, but I still don’t really see what his end game is, other than killing everyone that potentially put him behind bars in the first place.  Also random people.

[Maniac Cop and Serial Killer steal a prison bus and break into prison… ?]

Starkwell: So, no one reported that the prison bus was stolen and that MAYBE the prison souldn’t let the bus in?

Lovelock: Remember what I said about the cops in this universe?

[So I guess he is going after the people that shower-shanked him in prison.]

After a pretty sweet fire stunt, Maniac Cop kills his killers and flies out the window down a bunch of flights into a bus, which then explodes.  It’s THE DEFINITION OF BLAZE OF GLORY.  The story may have lacked some imagination, and had a whole slew of useless bits, like the Serial Killer Guy (why was he even in this?), but man, the action and stunts were tight. Can’t wait to show them part 3.
Documented by Kev D. and Posted at 07:11