The Coed and the Zombie Stoner. 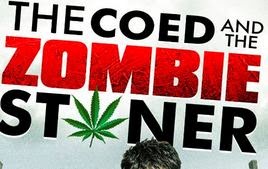 “The Asylum” seems to have a roster of “directors” that it gets to churn out shitty mockbusters and half-assed B Movies on a regular basis.  This is this director’s, if I read correctly, second time out for “The Asylum”.  The movie opens up immediately with a zombie terrorizing some kind of college house party.  Within LESS THAN TEN SECONDS, we get full frontal and backal female nudity.  Blonde and Asian bush, attacking a zombie with a dildo while talking about their sex score in the most recent issue of Cosmo.  Real classy, and enough to make Starkwell say “nope” immediately and make Lovelock go it alone.

[After the zombie rampage is over, it cuts and says “28 Days Earlier”.]

Lovelock: Oh man, it’s a real good thing Starkwell wasn’t here to see that.  Or… the rest of this.  I feel like he would he would have punched the TV about seven times.

[Then there was a cat named Romero and Lovelock fucking screamed.]

[Nerd Girl gets the nerd fraternity to accept zombie guy into their fraternity so she can be dating a fraternity guy… the zombie.]

Lovelock: So… Also “Revenge of the Nerds”.  What is this fucking music?  Nope.  NO.

Sometime after the fraternity hazing / zombie and nerd girl dating montage, They showed a sex scene between the nerd girl and the zombie wherein she ripped his penis off and then put it back on.  At that point, Lovelock ripped the remote out of my hand and started fast forwarding at TRIPLE SPEED.

[He basically stopped fast forwarding right at the end,  it looks like at some point there was a zombie outbreak, and then somehow the zombie guy wasn’t a zombie anymore, but then he was again, but at the end, he wasn’t and he and nerd girl lived happily ever after.  And then everyone else starts making out.]

So, this movie has boobs and nudity.  But there are many other ways to see boobs without having to watch the dumbest fucking movie maybe ever.  Oh yeah, and the movie ends with a TOPLESS SCENE INVOLVING THE OLD LADY GRANDMA CHARACTER.  Worse than you can imagine.  Burn my fucking eyes.
Documented by Kev D. and Posted at 08:18