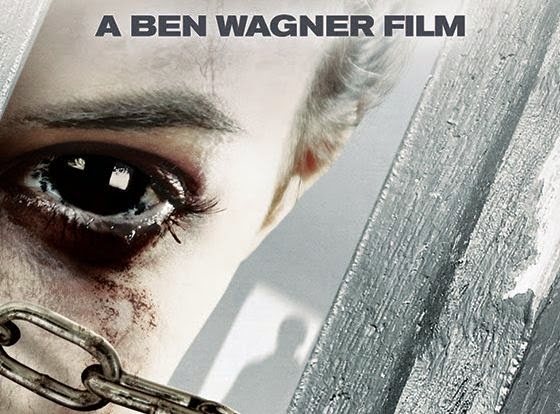 This movie has five people listed as cast members.  There are four people listed as writers.  There are two people I know, that are very much not excited to watch a movie about a few people stuck in a cabin, hiding from zombies that, as far as I can tell from the interwebz, we will never see.  Let’s go already.  At least it’s only an hour and twenty minutes long.

[Credits open with aerial shots of landscapes and cities.]

Starkwell: I hope they didn’t pay too much for that stock footage.

Lovelock: Or for the helicopter ride.

Four friends, composed of two couples, hang out in their cabin, and there’s a baby.  It cuts from them celebrating to DARK and SCARY clearly after the outbreak.  There are people asking to be let in to their cabin, they don’t let them in.  Zombies eat the people outside.

Starkwell: Kind of shitty that they didn’t even think about letting them in, and now they’re just listening to zombies kill them.

Lovelock: And why do the zombies sound like dinosaurs from “”?

Starkwell: You know, other movies have incorporated dinosaurs…

Starkwell: Also, why didn’t the people just try and break down the door?

Lovelock: Hold on to your butts.

The director does a fare job at creating tension, but it’s really slow.  It’s moving at a snail’s pace.  Every now and again, there are flashes of one of them killing their friends after they, obviously, must have become zombies.  Where’s the baby at?  Also, I guess since they don’t want to attract zombies, they whisper, mostly.

Starkwell: I guess the zombies mostly come at night?

The guy goes out on errand runs, but they don’t ever show that since that would take an actual budget, and more than two actors.  There are two actors in this movie, holy shit.  TWO.  And mostly it's just the girl being crazy alone in the cabin.  Like that Robert Redford movie, except not on a boat, and not Robert Redford.  And nothing happens even though there are ZOMBIES.

[The two share a cigarette and some synth music plays.  And then MONTAGE of them living in the cabin, surviving.]

Starkwell: So… this movie could have only been twenty minutes?

I get it, it’s intense being cooped up in a cabin, having nothing to think about but how you killed your best friends and your baby.  BUT DON’T MAKE A NINETY MINUTE MOVIE ABOUT IT.

Starkwell: More like, that’s it, MOVIE.  Show it again forever.

The troops are getting restless.  The actors are quite good, actually.  And it’s well directed and nicely shot.  But FUUUUUCK nothing is happening.

[The guy never comes back from his latest errand run.]

Starkwell: So, something happened, we just don’t get to see it... or?

[Girl has fucking CRAZY NIGHTMARES.  And then the front door starts bleeding… or at least it does in her mind.]

Lovelock: Well, at least we get to see that.

Starkwell: I appreciate that it’s more about her descent into madness than the zombie outbreak itself, but I’d like some kind of action… otherwise it needn’t take this long.

[He has a point - feels like a short stretched to a full.]

Near the end, we do finally get to see some zombies as they finally breach the cabin and the girl fights for her life.  Lovelock and Starkwell sat quietly on the edge of their seats.  For all the complaining about nothing happening, they certainly seemed gripped at the moment.  Definitely a slow burn kind of movie.  Takes a while to get there, but when it does, it makes you feel fairly uneasy as shit falls apart around the main character girl.  And she falls apart too.

[Guy comes back but she doesn’t let him in, because he can’t remember the secret knock.]

[He tries to bust in with an axe, she cuts off some of his fingers with some branch cutters.]

[She knocks him out with a baseball bat and ties him to a chair.]

Starkwell: So… is he a… zombie?

[It becomes clear that he is not a zombie, and that the bitch is NUTS and maybe a zombie.]

What an emotional roller coaster.  She stabs him in the chest.  She sees black zombie blood, but I think it’s all in her mind?  We see red blood.  A bizarre ending to a bizarre little movie.  TWIST!  Her blood is black!  She’s the homicidal crazy rabid zombie!
Documented by Kev D. and Posted at 11:56