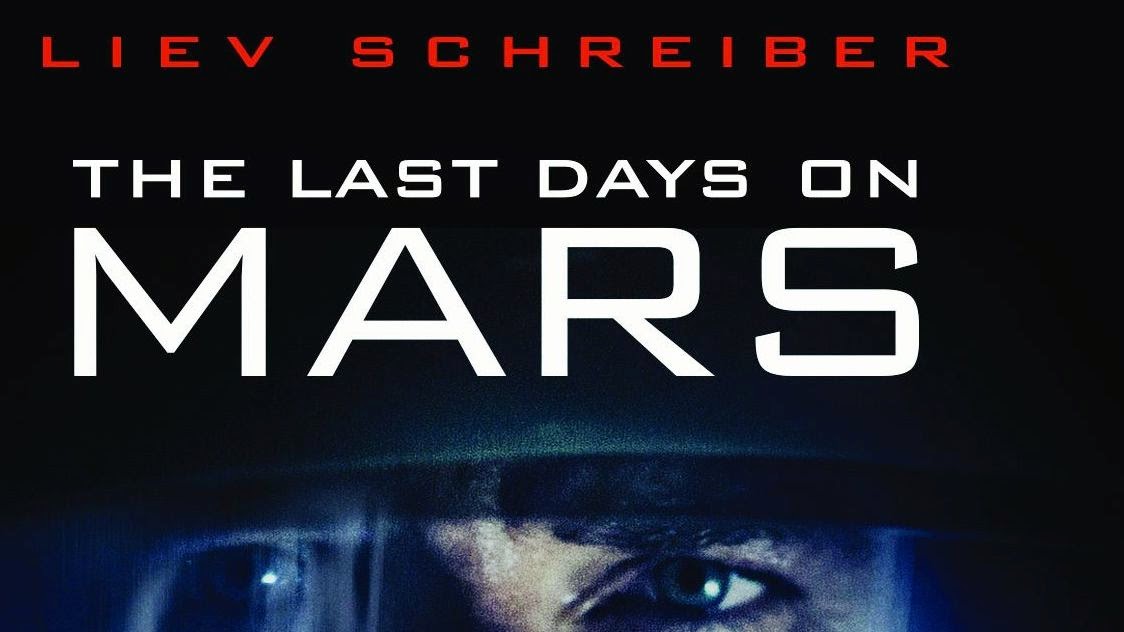 The premise behind this one sounds like a cross between “Ghost of Mars” and a more traditional outbreak-style zombie film.  The potential is there, but given that I haven’t really heard much about this movie, I have a bad feeling maybe it doesn’t deliver.  However, I’ve been wrong before.

[Two astronauts drive around Mars and shoot the shit.]

Lovelock: Not a care in the world, apparently.

The cast seems very competent - Liev Schreiber, the girl from “Sixth Sense”, the guy who played Casey Jones in the first Turtles movie…  We are looking good right now.  I think this is not gonna be a stinker!  The astronauts are on their last day of their Mars mission, and they seem a bit anxious to get the Hell out.

[The Russian Dude on the team finds life on Mars, but doesn’t want to share with the team.  While out there, the ground beneath him crumbles and he falls into Mars’ core.]

Lovelock: NOICE!  I just noticed that Casey Jones is playing the captain and the captain is Canadian!

The team gets the go-ahead to try and retrieve the Russian.  While on their way back to the site, the Russian’s girlfriend goes totally insane and disappears.  Space… madness?

[Liev Schreiber goes down after him into the hole, he finds LIFE.]

Lovelock: So, he sees creepy fungus growth while having weird hallucinations and decides to CONTINUE DOWN THE RABBIT HOLE?

Starkwell: Can’t become an astronaut if you aren’t brave.

Lovelock: And a lot crazy.  Maybe a little dumb too.

The rest of the crew pulls him back up after he freaks out, and he’s all like “nothing happened down there, I’m fine, whatevs”.  Meanwhile, they notice two pairs of footsteps leading away from the hole… presumably the Russian and his girlfriend.

[Dude lets the Russian back into the ship, and takes off his mask to reveal HE’S A DEMON NOW.  Russian Demon drills through the guy’s stomach, with a drill that happened to be lying around.]

The crew is trying to figure out what they are.  Zombies?  Aliens?  Demons?  I’ll tell you what they are.  They’re amazing.  “Sixth Sense” woman witnessed it all and she is FREAKING OUT, trying to tell them all that they’re all fucked, basically.  Methinks she’s right.

Lovelock: The best ones always go too soon.  He was a true Canadian hero.

[Right before he dies, he goes a little bonkers and tries to choke a dude.]

Lovelock: KILL IT! KILL IT!

[So, now he dies, and “Sixth Sense” girl restrains him and straps his dead body down to the gurney.]

Lovelock: No wonder Jason Schwartzman falls for her.

Lovelock and Starkwell stayed quiet for the next while, on the edge of their seats, gripped by the SUSPENSE!  The surviving astronauts study blood samples from Casey Jones and realize he’s infected by the Mars life shit that they found earlier.  Liev Schreiber continues to have his bizarre hallucinations about being stuck in an airlock or something.  He goes to explore the ship where they locked in the other zombies.  It’s very “Event Horizon” meets “Aliens” meets something something.

[Liev fights a zombie and is unable to make him stop getting back up.]

Lovelock: They have the technology to on a mission to Mars, but when fighting a zombie, he resorts to beating him with a flashlight?

Starkwell: They probably didn’t expect to be fighting stuff on Mars.

Lovelock: Wait a minute, this is the future. Where are all the phaser guns?

[I hope I'm not the only one who caught that reference.]

The crew is down to only three members at this point.  Liev, Blondie and Coward Guy.  Coward Guy takes off with the only good range rover leaving Liev and a possibly infected Blondie in a range rover with not much juice left and dwindling oxygen to fend off the zombies who are closing in fast.

Lovelock: Why don’t they ever make a happy movie about Mars?

[He says this after Possibly Infected Blondie kills herself in front of Liev… she immediately comes back and goes full rabid, mumbling “KILL ME”.]

Lovelock: Nothing ever happens on Mars.

[I hope I'm not the only one who caught that one as well... Liev kills her, in the head with a rock.]

Lovelock: Works better than the flashlight, doesn’t it?

The cavalry shows up, but they let Coward Guy, who is now Coward Zombie, onto the ship and they all get deaded.  Liev FINALLY kills coward guy with a series of helmet head butts to the face.  Still no lasers, but it does the job.  Then he throws him into space and sails off into the sunset.  Except there is no sunset, and we never get to see if he makes it or not.  All in all a fun little picture from a first-time (full length) director.
Documented by Kev D. and Posted at 13:21