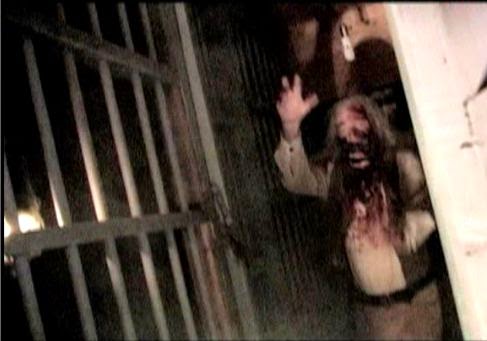 It’s hard to imagine that this is one of THREE zombie films that this writer director has managed to put out.  Granted with the micro-budget that these are likely made on, I can’t imagine any one of them being particularly grand or wonderful.  I don’t know how long the dudes will hang on this time around.  The intro credits play over, what I assume are scenes taken directly from the movie, while THE WORST FUCKING WESTERN SONG EVER RECORDED plays.  It’s kind of like how at the beginning of a porno they show a small clip from each scene and flash the actors’ names.  Like Anita Hardcock or something.

[Intro credits go on seemingly forever. With the theme song dragging on endlessly.]

Lovelock: Shot on a Nikon Coolpix camera.  From ten years ago.  Edited by a free program that came with Windows Millenium Edition.

[Characters are introduced in a western ‘town’.]

Lovelock: I think I said this last time we watched one like this, but I think this was filmed at the Great Escape in Lake George.

Starkwell: Judging by the buildings, they’re not trying very hard to look authentic.

Lovelock: Those are some fancy light fixtures for the WILD WEST.

So there’s a snake oil salesman who sells the townspeople stuff.  And the ‘saloon’ is some dive bar with stuff written in permanent marker all over the ceiling and the bar, stuff like “James and Mindy 4 evah”, which all looks and sounds very authentically western, of course.

[A bunch of zombies eat some cowboys in the woods.  The one survivor tells the sheriff and FLIPS OUT!]

Starkwell: I know this is terrible, but it’s reaching some seriously insanely, near funny, bad heights right now.

Lovelock: Seriously, I’m nearly entertained by just how much of a trainwreck this actually is.

Starkwell: That guy’s a good actor.

There isn’t much point in documenting this any further.  There were a lot of laughs.  A lot. I doubt this was meant to be a comedy.  Given how painfully bad this was, I can’t help but want to track down the sequel “Few Brains More”… Of course, Starkwell and Lovelock would need some time before they'd agree to watch it.  Don’t believe the IMDB user review claiming this is like 'Sam Raimi’s “Evil Dead” set in the 1800s'.  I mean I suppose it’s true if you change ‘Sam Raimi’ to ‘High School Drama Club', ‘Evil Dead’ to ‘total piece of shit’ and ‘set in the 1800s’ to ‘filmed in a small town using the local townies as the cast’.  I will say though, the film ends with a girl being thrown off a cliff and has a pretty sweet dummy shot.  A good dummy shot tends to make everything ok, and Starkwell and Lovelock ended up leaving feeling pretty good.

Lovelock: In a word, TRAINWRECK I CAN’T LOOK AWAY.

Starkwell: That’s more than one word.

Lovelock: This movie could never be described in one word.

Starkwell: Sure it can.  Terrible.

This movie is bad in the way that old eighties or seventies movies were bad, which is kind of refreshing.  It looks like a lot of care was put into making it, a lot of time, a lot of effort.  It's kind of fun to see that, even when it is - especially when it is - a colossal failure.  When movies TRY to be 'so bad it's good', it never works.
Documented by Kev D. and Posted at 07:36