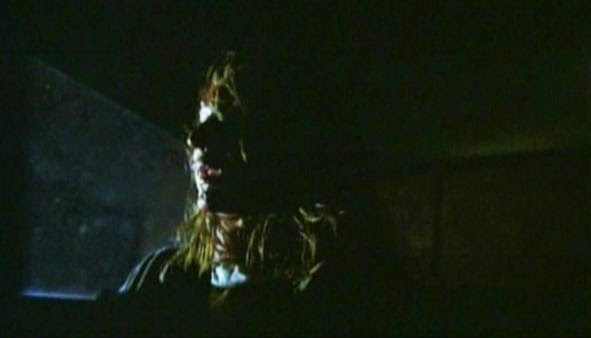 This is one of those zombie movies from the turn of the century that went entirely unnoticed, since, at that time, no one (present company excluded) gave a shit about zombie movies.  Especially not ones that were trying to do something a little different.  That being said, that it went unnoticed doesn’t necessarily make it bad.  So this might be an undiscovered gem.  Or it could be undiscovered for a reason.  We’ll know soon enough.

[British guy, acting like a cop takes a teenage punk hostage and seems to be getting ready to torture him.]

Starkwell: If he is a cop, his methods are quite unorthodox.

[Cut to a group of women getting stoned and talking about sex and wieners.]

Starkwell: And some pretty serious mom jeans... which seems like even in the early two thousands should have already been out of date.

[Then it cuts to one of the girls feeding some horrible looking bleeding face girl some kind of miscellaneous meat.]

Starkwell: WHAT in the FUCK.

Lovelock: Is any of this gonna be explained?

[Cut to one of the girls ripping off some meat from… HUMAN LIMBS.  Like hands and legs.]

[So these ladies are all eating human.]

Then one of the girls mentions that it is starting to smell so she takes a sack filled with what’s left of the dude they were eating and throws it into someone’s backyard.  Lovelock and Starkwell are confused and feeling seriously unsettled.  Apparently the punk locked up in the cop’s basement has been there a whole week?  Insane.  There is no real explanation for what is going on, really.   Then there’s a guy who kills a girl and eats her, so I guess the cannibalism thing isn’t solely happening to the ladies.  I’m lost.  Starkwell and Lovelock are lost.  I think maybe the writer director was as well.

Lovelock: And a condomless one at that.

[I don't think these ladies are worried about catching anything, since they appear to be, zombies.]

Then there’s a scene where the guy that was eating people takes his shirt off and he has a huge cut on his stomach like he had been gutted.  He then duct taped it shut.  So… now it's much more clear... these people are all zombies.  Still so confused, though.

[Two girls saw (like saw as in CUT) a random dude into pieces and cry a whole bunch and then pray (as in to God).]

Starkwell: This is certainly very different than the norm.

Lovelock: Are there any heroes in this movie?  The whole thing seems centered around a bunch of decomposing cannibals.  Are we supposed to feel bad for these bitches?  I don't.

The gore is pretty great and very, as I've said, unsettling.  It cuts from a girl having tea and biscuits with her grandma to the cop guy sawing a guy’s head off, or girls picking guts out of a carcass.  The only complaint the guys have at this point is that not a whole lot is actually HAPPENING other than people eating people and turning all gross and decomposey.

[The virus clearly spreads by bite and/or scratch.]

Starkwell: They are EASILY the least rabid zombies ever.

Lovelock: Like slacker zombies or something.  “Come here, let me hit you on the head with a hammer gently, thanks darling, oh look you’re dead.”

Starkwell: Even the people that die don’t make a sound when they get killed.  “I’m dead.  Bummer dude.”

Lovelock: Also… EVERYONE in this movie mumbles.

All of a sudden, Lovelock and Starkwell realized that the cop guy was a zombie hunter.  Hence sawing off a dude’s head, or driving a rod through their brain, or asking the punk about eating people.

Lovelock: Seriously, zombie hunting is supposed to be a young man’s game.

[It’s become clear now, also, that he isn’t a cop, but a guy looking for his daughter (?), killing zombies along the way.]

So, I GUESS the zombie hunter guy is the hero.  Anyways, the guys are getting a little bored, as it is quite slow moving, but they both agree that in a way this was a bit ahead of its time.  The writer/director’s previous film was essentially a mockumentary about one guy’s slow descent into zombieness after being bitten… so he clearly likes to try to present the subject in a more ‘real’ and different way than expected or previously done.  Kinda neat… but we all agree the pace sucks.

[Turns out the zombie hunter’s daughter was the decomposing zombie girl from the beginning.  He finds out when he tortures one of the main characters.]

Lovelock: Wow.  It all comes full circle and yet, BORES THE SHIT OUT OF ME AT THE SAME TIME UGH SO BORING.

[After zombie hunter gets his daughter’s history, he kills the girl.]

[He throws his tools into a lake.]

Lovelock: Wait?  What? No? If you don’t keep killing them who will?  Ugh, this movie.

Then the new girl shows up at the hooker’s place and they eat a dude.  The end, immediately.  So… um… yeah.  Great on paper, but quite boringly executed.
Documented by Kev D. and Posted at 09:38