BURT MALONE LETTERS: Kids' Shows with Zombies in Them. 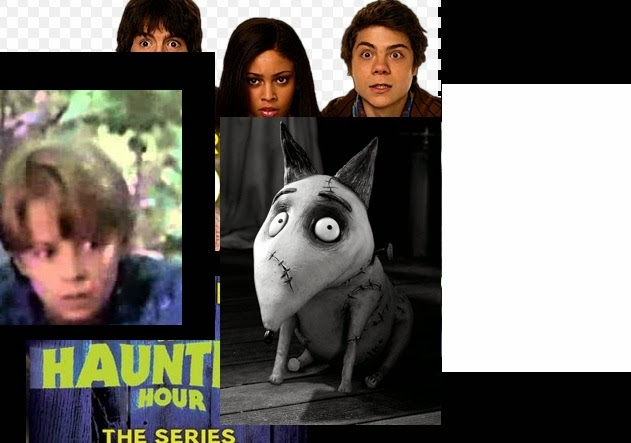 Burt just sent me an email out of the blue, complaining about Kids' Shows with zombies in them.  This might have to do with  the fact that I recently heard Burt Malone is gonna be a father soon.  I think he’s frustratingly trying to find something he could watch with his kid other than the standard fare.

HOLY SHIT Kev, where to start?

First, I tried watching one episode of “My Babysitter’s a Vampire” and it made me throw up all over my own face.  The first episode starts and it’s as if I’m supposed to already know who these two fucking knobs are.  Saying shit like “newbs” and “spellcaster” and “vampire killing”.

Like all shows about teenagers, the plot revolves around a guy doing what he's gotta do to try to get into girls' pants.  He may not know that’s what he’s doing, but that’s what he’s doing.  In this case that means bringing her dog back to life.  And then one character was like “Harry Potter would be ashamed” and then I’m pretty sure there was a foghorn sound, and then this theme song starts that sounds like a terrible Sugar Ray B-Side, and I stopped watching.

I did however skip forward to the actual “zombie” episode, and it was even worse than I thought it would be.  Truth be told, I probably would have liked this show if it were on when I was a kid.  That’s not saying much though, because I used to look forward to watching TGIF.

Step by step.  Day by day.  Moving right along.

I decided to give R.L. Stine’s “The Haunting Hour” a shot, and I must say, this one was much more delightful.  It helped that the zombie episode I watched had the kid from “Modern Family” in it.  Eventually the kid reanimates a corpse (?), and honestly, the makeup job is sweet, and it’s fairly scary.  If my TGIF watching self had seen this, I’d probably have shit my pants.

The story plays out like something in between “Re-Animator”, “Frankenstein” and, well, “Lassie”?  One lame thing though, “The Haunting Hour” is only a thirty minute show, which I think might be confusing for children.

Cheeky the zombie likes the Home Shopping Network!  And in the end we even get to meet his zombie mom!  It’s all fairly cool.

This R.L. Stine show got me thinking about that “Goosebumps” show from twenty years ago.  There was a two part ‘living dead’ type episode where all the townspeople are poisoned by some kind of chemical disaster.  Part one is slow moving and boring.  It picks up a little bit in part two but I can’t help but feel that most kids, if they aren’t too afraid to watch this kind of show, will not have the required attention span to sit through it.  Nice to see the Canadian landscapes though.  Like in the newer R.L. Stine show, the zombies look pretty sweet, although the “SPECIAL EFFECTS” when the zombies steam/dissolve/die in the sunlight are PISS POOR.

Apparently there’s a movie coming out called “Goosebumps” where Jack Black plays R.L. Stine.  So that’s something to… look forward to?

After “Goosebumps” I tried watching “Frankenweenie” but fell asleep eating a sandwich.  I mean the plot is like a combination of that FUCKING “Vampire Babysitter” episode I watched and the more enjoyable “Haunting Hour” (this may not be accurate though, I feel asleep very quickly).  Why is it that in kid-friendly horror stuff they always bring dogs back to life?

I would like to say, however, that what I saw of “Frankenweenie”, was actually quite good, and the animation kicked fucking ass.  I don’t blame the movie for my falling asleep, I blame the genoa salami.  Also I ended up having nightmares.  Again, not from the movie, probably from the genoa.  Stupid nightmare sandwich.

If I follow YOUR scoring style, I'd have to give the babysitter show a 1/4, "Haunting Hour" and "Frankenweenie" a 3/4 and the old "Goosebumps" a 2/4.  But since I don't follow YOUR scoring style, I will give the babysitter show a "FUCK YOU", the haunting hour gets a solid "MEH", "Goosebumps" gets the honorary award for "90's haircuts and mom jeans" and "Frankenweenie" gets a Tim Burton.

IN CONCLUSION.  I think I’m better off waiting until the kid is older, and just introduce him to real zombie movies right off the bat.  How old is old enough to watch Fulci movies?  Six?  Definitely by seven, right?  In the meantime, I’ll just show him Looney Tunes cartoons.

He should have also watched “Paranorman”, which was actually pretty awesome too.  Good luck with the baby Burt Malone.  Try and squeeze in some time to write me, from time to time.
Documented by Kev D. and Posted at 08:19