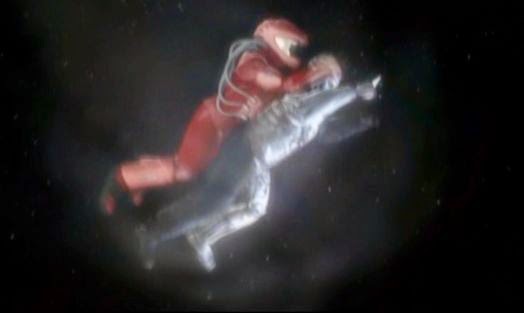 Jason’s first appearance as a full on zombie in part six was actually not too bad at all.  There was then a steady decline all the way down into ‘’ easily one of the worst things ever.  “Jason Goes to Hell” managed to be entertaining in a dumb, but still fun, kind of way.  At this point in Jason’s history, it is the tenth movie (Jason 'X'... get it?).  There is really nothing left to do, except make it be in space, for some reason, and also in the future?  I can’t wait to hear Lovelock and Starkwell rip this movie a new one.

[Some kind of first person view opening of doctors working on a corpse.]

Lovelock: So… Jason is Robocop?

Starkwell: We should be so lucky… Also, why would they be keeping Jason alive.

[Some Military Nerd Doctor wants to transport Jason to his facility… not frozen?]

When they go to the room to find Jason, he has somehow gotten out of his chains and kills everyone.  Pretty awesome actually, since the characters all suck so far and we're all glad that they're dead.

[Nerdy Scientist Girl locks Jason in a cryogenic freezing something and he drives his machete into her… through the insanely thick steel/whatever doors, and then the WHOLE place freezes.]

Starkwell: Where does one get a machete like that exactly?

Then the movie really takes a turn for the dumb when a crew from the future stumbles upon the “ancient” freezing lab.  No explanation is made as to why NO ONE between the present day and miscellaneous future four hundred years later ever went to check on the lab.  Also, there are androids?  The acting is as bad as the dialogue, which in turn, is as bad as the story.  The music is also terrible.  As are the costumes.  As are the sets (seriously, it looks like they went shopping at a "Star Trek: TNG" garage sale.

Lovelock: I don’t know, but I sure hope I make it that far.

Then future dummies thaw out Jason and Nerd Girl from the beginning.  They heal the girl with their healing machine, and revive Jason.  Big mistake.  Then there was a stupid scene where a ‘student’ bones her professor.  And by bones I mean rides him while wearing lingerie and twisting his nipple with huge metal pliers.  Simultaneously, two of the other students bone.  And then one of the dudes does the android, or wants to anyways.  Starkwell got up to leave, but then Jason sat up on the bed and killed the dumb blonde.  So Starkwell sat back down, and decided to stay, at least for now.

Starkwell: I’m pretty sure Kane Hodder just took advantage of that scene to really feel up that girl’s titties.  He almost pulled her shirt off.

There was a scene where professor brings Thawed Nerd Girl some food and tells her quite casually “oh by the way, Earth is dead, you’re on a spaceship heading towards Earth 2”.  After the requisite “'Earth 2' is a sick album" conversation, both Lovelock and Starkwell laugh non stop at the fact that her reaction to this news was basically “oh cool, show me around your space ship, I'm not in shock at all”.

[Starkwell straight up left and went to bed.]

There are so many characters.  Like in some of the other films, they don’t even bother developing any of them.  Why bother?  Since Jason just ends up killing them all... I guess.  Body count for the sake of body count.

So, it doesn’t matter who they throw at Jason, even “bad ass” military types, and they all die immediately.   Lovelock said the movie really jumped the shark when the android turned her gun sideways to shoot Jason gangster style.  This movie is really bad.

Lovelock: No one noticed that Jason was “killed” on top of the healing bed/machine?  And now he’s a super Jason?  And it also created new futuristic armor and a new futuristic mask for him? The healing machine also heals things?  FuuuUUUuuuuck this.

The movie goes on for so much longer than it needs to.  Between this point and the end, they even manage to put Super Jason in the holodeck where he kills virtual reality campers.  Eventually Jason blows up fighting a black dude in a Halo outfit and then they ride each other down to Earth 2, from outer space.  Yes.  Really.  They set it up for a sequel which thankfully never happened.
Documented by Kev D. and Posted at 07:33