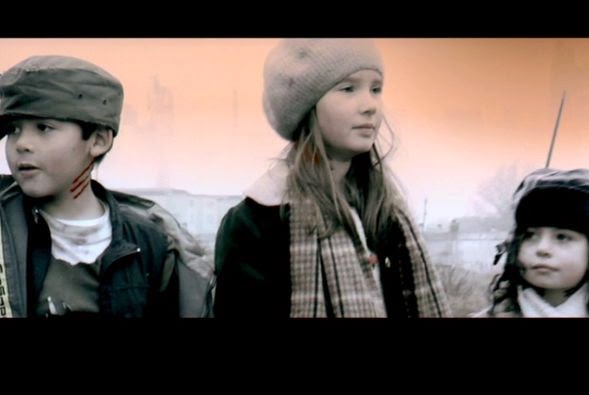 Long before George Clooney played an upset widower, in “The Descendants”, there was a terrible Chilean movie called “Descendents” about a mysterious virus turning everyone into zombies.  Obviously the two have nothing to do with one another, but I really didn’t know how else to introduce a Chilean zombie movie that promises to be absolute garbage.  Have fun, kids.

[Kid narrates, describes the zombie apocalypse, a montage of children’s drawings show the evolution of the world.]

Starkwell: If your kid draws people vomiting blood, it might be time to get them some help.

Lovelock: Or lock your doors, ‘cuz LOOK OUT.

[Apparently the kid is immune and needs to find the ocean (?)]

Starkwell: Wait, is she dancing with a mermaid?

Lovelock: Why does her mom want her to go to the sea?  Dumb plan.

Starkwell: And… she’s supposed to find the magical octopus there?

Another montage shows the kid being experimented on, and show her seeing her mom get eaten, and… yeah, now she’s all alone on the beach or something.  They cram a lot into a super schizo intro.  And then it quiets down and we follow Camille, the young girl, as she wanders the wasteland alone.

Lovelock: If this whole movie is this girl walking around and telling us how lonely and hungry she is, I might lose my shit.

The good news, the movie is only about an hour and ten minutes.  The bad part, so far, it really is mostly just shots of the girl walking around and narrating a shitty screenplay.  Occasionally there are shots of her running away from soldier people… the zombies themselves don’t really scare her because she is immune to them and they don’t attack her.  But yeah, at a few points some army dudes are chasing her and her other immune children friends and trying to shoot them.  Not sure why.  There are a lot of flashbacks of when the world went to shit, but it doesn’t really explain anything, or really go anywhere.  Plus they keep repeating the same flashback, basically.  The zombie eating people parts are decent enough, and it’s nice to see someone tryng to do something different, but the problem is, it really wasn’t much of an idea at all.  Also I hate it.  Man fuck this movie.

[Ten minutes of a bunch of kids playing in a playground.]

Lovelock: I thought George Clooney was in this…

Starkwell: Why are they speaking English?

Lovelock: This movie blows.  So hard.

[Army shows up and starts shooting the kids.]

Lovelock: Well, at least that.

Starkwell: Wait, why is the army hunting children… and zombies?

Lovelock: I’d appreciate if the girl would stop having the same fucking flashback over and over again.  WE’VE ALREADY SEEN THIS.

Starkwell: HOLY SHIT, yeah we get it, you want to get to the sea.

Then the kids find the sea and there is a giant octopus that is swatting down the helicopters.  THEN THE GIRL TURNS TO THE CAMERA AND SHE AND HER FRIENDS HAVE TURNED BLUE, GROWN GILLS AND HAVE WEBBED FINGERS AND SPARKLE LIKE DIAMONDS.  Yes.  That happened.  Lovelock straight up passed out after trying to make a joke that simultaneously referenced “Avatar”, “Twilight” and “Waterworld”, and ran out of air.  When he came to, he legit screamed  “THE SMURFS” and then started speaking in tongues.

[After the credits, it tells us, through the worst fake news broadcasts EVER FILMED, that ten years ago GLOBAL WARMING… caused this?]

[No, seriously, you don’t even know how bad the fake news broadcasts look.  The guy is reading his lines off of a piece of scrap paper, and one of the ‘broadcasts’ looks to be in someone’s wood paneled basement, and another one looks like they filmed it in a bar.]

Starkwell: WHY IS THERE AN OCTUPUS WHY ARE THE KIDS SUDDENLY MERMAIDS??!?!?!?!

It’s one of the most frustratingly bad movies I’ve ever seen.  Must be seen to be believed.  That being said, don’t see it ever.
Documented by Kev D. and Posted at 07:56