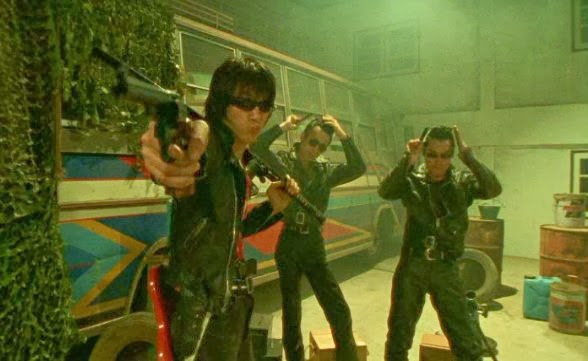 Guitar Wolf’s album “Jet Generation” might have, at the time, been the loudest record ever.  Not necessarily the HEAVIEST, that’s not what I mean.  I mean LOUDEST.  If Spinal Tap put their amps to eleven, I’d say Guitar Wolf plays at twenty-seven.  Thousand.  So it is fitting that this movie is as amped up as it is.  It’s a relatively non-stop rock’n’roll thrill ride, full of laughs, gore and, of course, WEIRD JAPANESE DUDES.  Also rock.  You’re welcome, Lovelock and Starkwell.  After a shot of really bad looking UFOs are seen swarming the Earth, a radio DJ warns people not to touch any meteorites that fall to the Earth, then we see main character ACE.

[Ace greases his hair, puts on his leather coat and heads out to a rock show.  The rock show.  GUITAR FUCKING WOLF.]

Starkwell: Wait, is he shooting electricity from his guitar?

Lovelock: I don’t know, but he definitely just said “lock and loll”.

Lovelock: I don't know about that, but I will say that these dudes lock hard.

Then we are introduced to the evil sleazy club owner, who, for whatever reason, dresses in hot pants.  All the time.  Ace walks into the middle of an argument Guitar Wolf is having with the club owner, at which point Ace witnesses Guitar Wolf explode a guy’s head with his magnum.

[Guitar Wolf gives Ace a whistle (a wolf call) to use if ever he needs help.  Oh also, they are now ROCK AND ROLL BLOOD BROTHERS.]

Lovelock: I would give my left nut for that whistle.

At this point, at a gas station, we are introduced to the androgynous Tobio, as well as a trio of weary travelers who are clearly going to be the comic relief of this whole thing.  Then we meet a group of evil yakuza looking to do an arms deal… it is a lot of characters to expect Lovelock to keep up with.  Ace, at this point meets Tobio and it is love at first sight.  Unfortunately for them, this is also where they first meet zombies.

Lovelock: Ace is number one man.

Starkwell: Why do all of the turn of the century Japanese zombie movies have blue zombies?

[Ace decides to go back to the gas station and save Tobio from zombies, after he has a vision of Guitar Wolf riding on a motorcycle screaming “ROCK AND ROLL”.]

Lovelock: I think if I had that vision, I’d be able to conquer the world.

Lovelock: Well, I could, at the very least conquer this bout of constipation I’ve been dealing with.

On the plus side, at least half of the characters that we were introduced to are already dead.  Comic relief trio is down to a duo.  There are only two yakuza people left, and I think they work for the club owner, but I'm not sure… also on the plus side, Tobio and Ace are safe.  So there is this one random mercenary type woman still running around... really, who cares?   Because Guitar Wolf is LIGHTING up the fucking stage as we speak.

Lovelock: I need to get me one of those flaming microphones.

Tobio and Ace are bunkered down somewhere and they share a moment.  So Tobio strips and reveals that she’s a dude.  Ace freaks out and runs away.  But then he has a Guitar Wolf vision.

Lovelock: Way to go Guitar Wolf.  Love should have no boundaries.

[Ace loses track of Tobio and blows his Guitar Wolf whistle in a moment of despair.]

[On their way to find Ace, Guitar Wolf pick up the comic relief couple.]

Starkwell: Wait, so they were able to hear the whistle but can’t figure out where he is?  You might want a left nut refund.

Anyways, then they meet up with mercenary girl and fight zombies with magic electricity guitar picks and Lovelock does a back flip, a jump kick, and then high fives himself.  There’s a scene where Guitar Wolf has a huge fucking gun in his hand, guitar slung over his back, and samurai sword in his remaining hand.  Then he blows a zombie’s head off while Bass Wolf and Drum Wolf chill out behind him combing their hair.  I thought Lovelock was going to die of happiness.

[Guitar Wolf finds Ace, and tells him he no longer needs the whistle.]

Lovelock: Shit, can I have it then?

[Guitar Wolf jumps out of an exploding building screaming “rock and roll” and strumming his guitar ALL AT THE SAME TIME IN MID AIR.]

[After landing, he tunes his low E.]

[Evil Club Owner shoots  laser beams out of his eyes, and then is blown up with a rocket launcher.  There was some hair greasing/combing mixed in.]

Lovelock: When did Drum Wolf and Bass Wolf have time to put Christmas lights on the hood of their car?

Starkwell: I’m trying to figure out how Guitar Wolf got up to the roof so quickly.

[Guitar Wolf pulls a sword OUT OF HIS GUITAR and cuts the Mother Ship UFO in half and essentially saves , and maybe even the world.]

Lovelock:  Man, now I can’t decide if I’d rather have the wolf pack whistle or the guitar sword.

Starkwell: Why did he need the samurai sword earlier if his guitar WAS a sword?  Also wouldn't he have to detach the strings to pull the neck off like that?

The effects are pretty bad.  The story is schizophrenic and choppy.  There are plenty of useless scenes and useless characters.  Hell, there are even shots that are clearly just put in because Guitar Wolf looks cool.  The music, other than Guitar Wolf’s songs, isn’t particularly very good either.  But none of that really matters, since somehow, the whole thing kind of works anyways and is as fun as Hell.  There are no boundaries in Rock and Roll.
Documented by Kev D. and Posted at 09:02