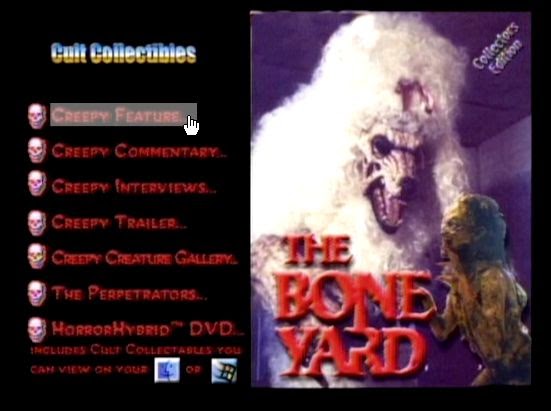 Right off the bat, the DVD looks cheap.  The menu is atrociously grainy looking, which only tends to make us all believe that the movie will look like shit.  Already, from what I have read, this film is a mixed bag of insanity, so a cheap copy should only help make it all the more insane.  The film starts off with some seriously aggressive music, complete with horns that wouldn’t sound out of place during a Clouseau – Kato fight scene.

[Old dude in a hat investigates a house… silently?]

Starkwell: Not everyone can pull off a bucket hat.

Starkwell: This old dude is ultimately not pulling it off.

Lovelock: He is dressed exactly like Clouseau.  The problem is, he ain’t funny.

[Young Cool Guy snoops around a room, and then a creepy chunky woman attacks him, with a pillow?]

Lovelock: Only in movies do pillow fights result in so many feathers.

Then there was a scene where the chunky lady, that the Young Cop calls ‘the witch’, asks the cops to leave her house and then glances directly at the camera, as if to say “did I do ok mister director?”.  And it was GLORIOUS.  And Lovelock and Starkwell laughed for about a year.  Apparently the Witch is a psychic that the cops sometimes use to help with their unsolved cases.  I should mention that the Witch is one of the worst actors I’ve ever seen.  But in that really AMAZING way.

Lovelock: This is CLEARLY where “The Medium” got most of its ideas.

[The Witch has a nightmare about a zombie kid giving her a hug.  It goes on forever.]

Starkwell: This is going to be one dragged out movie.

Lovelock: Why is she letting that thing hug her?  I’d be like “Ew gross get it off”.

Starkwell: I love that the zombie kid hug dream was enough to get her to help the cops with their case.

As bad as she is, the Witch is starting to grow on Lovelock and Starkwell.  Her acting is terrible, but still, she looks like she is trying SOOOO hard.  That level of failure is phenomenally fun to watch.  The case she is helping with involves some dead children and a Chinese Mortician, who is apparently behind it all… So what do they need her for?

[They go to the coroner’s office with Witch and meet Miss Poopinplatz.  Yeah.  That’s her name.]

Lovelock: What’s the point of the Young Cop?  He hasn’t had a line yet.

It’s such a fucking slow moving film.  Holy balls.  But then Witch holds a lock of hair from one of the dead kids and the vision that she has is nothing short of spectacular.  It involves superracist Chinese Medicine Man and MORE zombie kids.

[Turns out the zombie kids were real, and in the coroner’s office.]

Starkwell: To be honest, the zombie kids look pretty gross.

[Witch tries to go and warn them about the ZOMBIE KIDS ON THE LOOSE.]

Starkwell:  You got to hand it to a movie for going with “overweight tomboy uggo” as their lead female heroine character.

Lovelock: I see where “Push a Novel by Something Something” got its idea from.

Witch finds the zombie kids eating a bunch of corpses.  The effects are actually pretty awesome, and sort of scary.  Meanwhile, there is a girl who was dead after killing herself in the bathtub, and about to have her autopsy done by the coroner, who suddenly comes back to life?  No explanation.  Seems like a lazy way to get a better looking love interest for the Young Cop.

[Zombie kid runs through the air vent over her head and then taunts Witch with a doll.]

Lovelock: Just fuckin’ chop them up with the axe!

Starkwell: How are they making that noise?  It sounds like radio feedback.

Once this initial wave is over, it takes a while for anything else to happen again.  I should mention that we are about to hit the one hour mark.  It just seems like a shame to have such rad looking zombie kids and not utilize them more.

[Melting zombie pops back up and smears ooze all over Poopinplatz IN THE FACE.]

Lovelock: Not so fast Poopinplatz.

Starkwell: They keep bitching bout the elevator, can’t they just take the stairs?

Lovelock: Dude, Fatty McWitch don’t exactly look like someone who “takes the stairs”.

[Meanwhile, Poopinplatz has been vomiting endlessly into a sink.]

Then Poopinplatz turns into a HUGE rubber monster and kills the one random black dude that just showed up and the coroner.  She eventually is electrocuted to death.

At this point everyone is dead except the two cops, the Witch and the random Suicide Girl.  But then, Poopinplatz’ poodle, who was running around the coroner’s office, ate sone melted zombie guts and has turned into a super demon, just like Poopinplatz.

Starkwell: This movie is bananas.

The Poopinplatz Poodle demon is really just a dude in a demon poodle suit.  Kind of like a gorilla suit but so much more.  Witch ends up one on one with the poodle and blows it up with a pipe bomb that just happened to be lying around the coroner’s office.  The fucker blows up like the DEATH STAR.  And the whole building collapse.  And yet, somehow, they all managed to be out of the building and at a safe distance.  Then the movie ends.  No explanations about ANYTHING THAT HAPPENED.  No explanation about why the girl suddenly CAME BACK FROM THE DEAD.  It just ends with Young Cop and Suicide Girl and Witch and Old Detective hugging and laughing.  Completely fucking insane.
Documented by Kev D. and Posted at 08:16