Return of the Living Dead III. 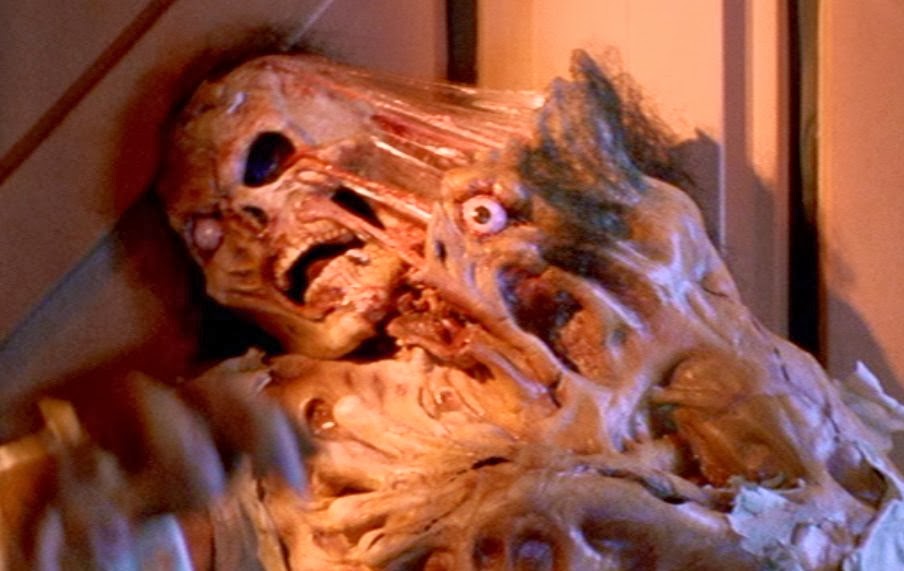 First, Brian Yuzna went and made a mediocre, sort of sequel, to “Re-Animator” (and eventually a pretty terrible next sequel... "Beyond..." YUCK), then he went on to make the fourth installment of the “Silent Night, Deadly Night” films.  I didn’t even know that there was more than one.  So, at that point, with his experience in making sequels to films that were not his, he takes the already sinking “Return of the Living Dead” franchise and attempts to breathe some new life into it, an bring it back to the surface.  The results were, well, you’ll see.  Or hear.  You’ll hear.  Or no, actually, it’s read.  You’ll read.  I guess that is still just seeing.  You’ll see.

[Military types discuss their experiments on the zombies while walking around some top secret area.]

Starkwell: Do they really need to label a door inside a super secret military lab as restricted personnel only?

Lovelock:  Right, like suddenly the super spy breaking is gonna turn around and think “oh wait, I’m not authorized”.

Geeky dude Curt picks up his rebel girlfriend Julie and they have decided to sneak into the military base and check out the experiments.  Turns out golden boy Curt is some kind of colonel’s son, and he managed to STEAL HIS DAD’s top secret ID, and they get onto the base and go sneaking around.

Lovelock: So much for needing to be a super spy to break in...

Lovelock: It TOTALLY makes sense that a base doing experiments on zombies would have no cameras or security guards anywhere ever… NOT.

Starkwell: That needs to be the only time you ever do that.

[One security guard walks by and says “commencing rounds”.]

Starkwell: Well there is the one guard… although he looks fresh off the set of “Revenge of the Nerds”.

Lovelock: More like “Revenge of the Nerds PART THREE”.

Starkwell: Sure.  If that makes it better for you.

[Curt’s dad tells him they are moving away, so Curt storms off with Julie and they ride away on his motorcycle, planning to run away.]

Lovelock: Wait, he has an 'L7' poster on his wall?

Starkwell: They really should be wearing helmets.

[Julie, turned on by the fact that they just decided to run away, rubs his wiener while he is driving.  They swerve due to an oncoming eighteen wheeler (and the wiener rubbage distraction) and crash.  Julie flies into a telephone pole and dies.]

Lovelock: Where exactly were they going?

Starkwell: I don't know, but they didn’t make it.

Lovelock: That’s why I never let a girl fondle my junk while I’m driving at high speed on a motorcycle without a helmet, at night.

[He rides with her dead on the back of his bike, limp, to the base, in the hopes of reviving her.]

Lovelock: This is the point in the movie where it really can go in a lot of directions.  “Weekend at Bernies”… “Deadgirl”… something else…

So Curt manages to sneak a dead Julie into the top secret lab, finds the room with the Trioxin, figures out what to do with it, puts on a HASMAT suit, and brings her back to life.  He’s pretty clever for such a dumb fucking loser asshole.

Lovelock: Can’t really blame him for wanting to bring her back.  Those were some real hooters.

In the process of reviving her, he lets loose a TARMAN, who in turn, starts an outbreak by chewing on what little amount of security guards are actually on this secret base that everyone knows about.  Julie and Curt escape the base and go driving around the city looking for food, because Julie is way hungry.

[Julie bites a chunk out of a gang banger’s arm, and then she gets all sexy (?) about it.]

Lovelock: At this point, hooters or not, I think I’d be all set to send her back.

[After witnessing a shop owner get shot by one of said gang bangers, they drive off with him in the back of their van.  The shop owner dies, Julie eats his brains.]

Starkwell: Wait… how did they lose the cops that were chasing them?

[They then escape into the sewers.]

Lovelock: I kind of wish the Ninja Turtles would show up and just kill Curt and Julie.

Starkwell: I’d settle for a CHUD.

Lovelock: Raphael is cool but rude.

Starkwell: Give me a break.

At this point Julie starts realizing that pain helps with the hunger… doesn’t make a whole lot of sense, but whatever.  So now she starts like sticking needles in her arms and boobs and stuff.

Lovelock: Michaelangelo is a party dude.

[Julie jumps off a bridge and Curt finds her washed up on the shore downstream on a pile of garbage… even though the water is ankle deep.]

Starkwell: Undead or not, she would have exploded when she hit the pavement, and she certainly wouldn’t have "washed up” anywhere.

[The gang bangers finds them under the bridge (?)]

Starkwell: Police, Military…. Everyone looking for them… but who finds them, immediately?  The gang of thugs that didn’t even see where they drove off to in the first place found them NO PROBLEM.

Luckily Curt takes off back into the sewers with an upset still undead Julie and a crazy homeless man  they just met, who takes them back to his secret sewer hideout.  Apparently “YOU CAN CALL ME RIVER MAN”.  He really fucking said that.

[River Man gives him a ‘mardi gras coin’ and says, “someday you do something nice and give them the coin and the coin keeps circulating”.]

Lovelock: So THAT’s where “Pay It Forward” got all of its ideas.

Julie keeps on stabbing herself with needles and glass shards, and Curt and Julie take a break in River Man’s lair to have sex.  Obviously.  Gang bangers catch up to them and start attacking, but then, OUT OF THE SHADOWS, comes Julie with all sorts of nipple rings and blades sticking out of her, and for some reason, she’s making slithery snake noises.

[Head Gang Member, , decides he wants to have sex with Julie (?)]

Starkwell: Why is no one freaked out by the fact that there are shards of glass LITERALLY emerging from her tits?

Lovelock: I don’t know, but this shit got real lame real fast.

[Julie rips off ’ head and then kills the other gang dudes.]

[Gang members start popping back up as zombies and eating each other.]

Lovelock: Super sweet.  Although, I will say, the whole reason he brought her back was CLEARLY her boobs, and now she totally ruined them.

Starkwell: Glad your priorities are in order.

Lovelock: So much for paying it forward.

Starkwell: Curt should use that coin to kill himself.  THAT would be paying it forward.

Curt’s dad saves Curt and saves the day and then they hug.  Julie is now just SPECIMEN 32, naked in a cage.  And it looks like they are trying to turn River Man into Robocop.  But then Curt’s like “no way Jose” and tries to spring Julie free, which leads to everyone in the lab dying.

Lovelock: They could’ve just put some clothes on her and all of this would have been avoided.  But obviously when Curt saw them boobies…

[Apparently, Curt is able to command River Man because he has the Mardi Gras Coin.]

Then Julie and Curt hold hands and walk into an open cremation thingy which makes no sense because they don’t even seem like it hurts AT ALL.  Apparently walking directly into an oven feels just whatever, and it’s comfortable enough to make out with tongue.  In a way it's a step up from part two, but it's still nowhere near the original.
Documented by Kev D. and Posted at 08:35