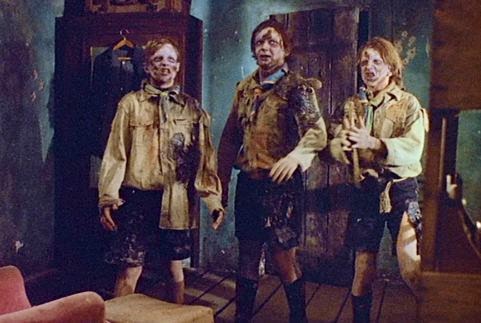 Also known as “Dellamorte Dellamore”, this artfully crafted Italian picture stars Rupert Everett in the role of “Francesco Dellamorte”, or as he is known by most, the role of “lucky guy who gets to be with the disturbingly hot woman, repeatedly”.  The movie is surreal, weird, funny, shocking and all around fun.  But I’d be lying if I said that I one hundred percent understood the whole thing.  Either something got lost in translation or… I don’t know.  But I’m anxious to see the reaction it will get from Starkwell and Lovelock.

[Francesco answers his door dressed only in a towel, it is a zombie at the door, he blows the zombie’s brains out.]

Lovelock: Quite literally starting with a bang.

Seems Francesco is used to the dead coming out of their graves, and often has to re-kill the dead and then re-bury them.  It’s a dirty job, but I guess someone has to do it.  Thankfully for us it is the AWESOME Francesco.  And we get to watch.  While burying one zombie, another zombie comes at Francesco and his sidekick Gnaghi, and Francesco drives a shovel through its skull.  Lovelock looks like a kid in a candy store who just started eating all of the candy.

[Francesco sees a woman, played by Anna Falchi, at a funeral and seems, well, SMITTEN.]

Lovelock: I don’t blame him for staring, HOLY COW.

[I should mention that she comes back to visit her husband’s grave two days in a row, and Francesco somehow ends up boning her on the second visit.]

Starkwell: So… insult a woman, tell her you’re glad her husband is dead, wait one day for her to come back, take her inside a tomb full of skeletons where her dress will get torn off, somehow, follow a puff of blue smoke to the CRYING woman, then… BONE HER IN THE MOONLIGHT?

Lovelock: I should try that.  Is there a place where extremely hot and loose widows hang out?

Starkwell: Well, you’ve outdone yourself with that sentence.

Lovelock: I guess first I should move to and then find me some grabby skeletons willing to do some of my dirty work.

Starkwell: And there it is… you’ve topped yourself once more.

It’s a fairly lengthy sex scene, full of Rupert Everett ass, Anna Falchi breasts, and shots of Gnaghi watching them do it while eating spaghetti.  They are eventually interrupted by the woman’s zombie husband rising out of his grave and biting her.  And then she dies.

[She comes back from the dead, and he immediately shoots her in the head.]

Lovelock: A weaker man would’ve probably tried to get one last ride out of her.

Lovelock: I would be that weaker man.

Then for some reason Francesco and Gnaghi are out for lunch in the city with the mayor and Gnaghi vomits on the mayor's daughter.  Starkwell and Lovelock are confused and a bit disturbed.

[The girl he vomited on dies in a motorcycle crash and ends up at the cemetery.]

Starkwell: Wait… her head EXPLODED when it was RUN OVER BY A TRUCK… how is it that now she has a head again?

[Gnaghi is excited for her to re-animate.]

[The crash also involved a school bus full of boy scouts, so obviously, Francesco and Gnaghi are gonna have their hands full tonight.]

Francesco bashes in a zombie nun’s head with a pot after killing a bunch of zombie scouts.  Then he accidentally shoots Gnaghi’s television!  Uh oh spaghetti-oh!

[Zombie Biker Dude Claudio explodes out of his grave RIDING his motorcycle.]

Starkwell: Shockingly, that is not the first time we’ve seen a zombie explode from their grave riding a motorcycle.

Lovelock: Yeah, but that one looked THE BEST EVER!

[Sorry, "Psychomania", but you've been outdone.]

Francesco said “The living dead or the dying living is all the same” and I think Starkwell’s mind blew out of the back of his head.  Lovelock was just happy about th increasingly impressive kill count.

[Gnaghi rips off the Mayor’s Daughter’s head and begins a love affair with it.]

Starkwell: Wait, how is the head following him around? … not like it has legs…

Lovelock: Next I suppose you will ask how a severed head can speak?

[Then Starkwell promptly slapped Lovelock in the face.]

Dellamorte sees zombie Anna Falchi, starts making out with her, but then she bites him.  This means that when Francesco shot her in the head “immediately” she was STILL ALIVE... ?  He feels pretty bad about, as one probably would.  Then he sees Death who tells him to start killing people, and it starts to get really weird, because he starts doing it…

[Francesco drives into town and drive-by shoots seven people in the city.]

Starkwell: Wait… why did he need to make that deal with Death?

The mayor ends up dying (twice) and the new mayor comes to visit Francesco.  The new mayor has an assistant… and it’s… Anna Falchi.  She comes back later that night, and they are about to bone… but then she says she wants to be with an impotent man… so the next day, he goes to get castrated STAT.  The doctor then injects his testicle (apparently he only has one) with some HUGE syringe full of something and… yeah I don’t fucking know.  But it made Lovelock vomit.

[The next day, the woman comes back and tells him “I CHANGED MY MIND I DON’T WANNA BE WITH YOU.”]

Starkwell: I'd see if I could go get my testicle back.

[Depressed he goes out drinking and picks up two hitchhikers.  One of them is Anna Falchi.]

[They go upstairs and bone lots.]

Lovelock: Honestly, the whole ‘having to kill the zombies thing’ would be totally worth it if I could see that girl at every turn.  And manage to bone her all the time.

[This version of Anna Falchi is a prostitute, and they charge him for the sex so he BURNS DOWN THEIR house.]

Lovelock: I withdraw my previous statement.

Now the movie REALLY starts being confusing, as Francesco goes around killing more and more innocent people for no reason.  Francesco decides to hit the road and get out of Dodge with Gnaghi.

[They go through a tunnel and arrive at the edge of the world?]

Lovelock: Wait, did he say the rest of the world doesn’t exist?

[Gnaghi keels over and dies.]

Starkwell: Wait… is he in Hell or purgatory or… ?

Lovelock: You lost me.

Then it starts snowing.  The shot moves slowly out and then… they are in a snow globe?  Yeah, I have no fucking idea what the Hell went on in this bitch.  This movie is completely insane.  And yet, we all had fun.
Documented by Kev D. and Posted at 07:42