Apocalypse of the Dead. 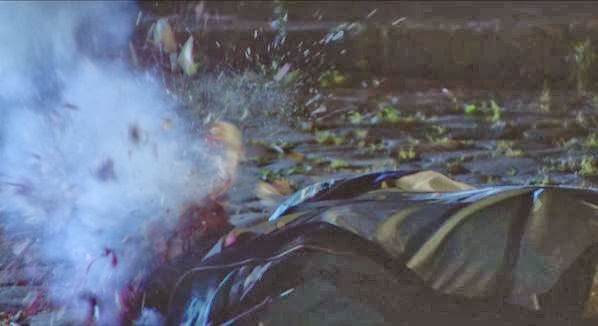 Also known as “Zone of the Dead”, I don’t know a Hell of a lot about this movie, other than the fact that it was made a few years ago and manages to star “Dawn of the Dead” ass kicker Ken Foree.  That’s got to mean something.  Either the movie is good, or Ken Foree needed to eat.  It is a Serbian film… so there’s that that already sets it apart from the pack, at least a little.

Lovelock: Why was Ken Foree in ?

Lovelock: The film stock looks like the same as those CBC Original shows used in the eighties.

Starkwell: I’m not letting you work in another "Littlest Hobo" reference.

Lovelock: I was actually thinking "Kids In the Hall".

Starkwell: I actually find it has the quality of those Mexican soap operas.

Some of the actors have been overdubbed, others not.  With the exception of a couple of main characters EVERYONE has a thick accent.

Starkwell: Why would two Serbians speak to each other in English?

Then a bunch of soldiers are monkeying around with their pistols, as people do, and shoot a hole in the HUGE freight train parked next to them carrying some kind of nerve gas, that I assume is about to make everyone go all zombie.  This just might be one of the dumbest causes for an outbreak ever.  On the bright side, the running and rabid style zombies don’t look half bad.

[Ken Foree and some other agents are to escort a criminal dude to somewhere.]

There’s a whole evil military thing starting to play out, it’s all pretty cookie cutter.  The escort mission has officially gone awry, and they are now smack dab in the midst of a real zombie apocalypse.  A zone of the dead, if you will.  An apocalypse of the dead.  Then there was a really fucking amazing car stunt and Lovelock FLIPPED OUT.  Then they find a few survivors who are, obviously, scantily clad girls with huge cans.   There’s some kind of super soldier dude who is out there alone killing zombies.  He’s unstoppable, it seems.  Also… Great gore.

[One of the main old dudes has been bitten and his wound looks disgusting.]

[Ken Foree and Infected Hand Wound Old Man have a heart to heart.]

Lovelock: This is just lke that movie with Jack Nicholson and Morgan Freeman… you know the one about the shit list?

Lovelock: More like bucket of shit.  That movie needed a zombie outbreak.

[They find a severed head that still wiggles!]

Lovelock: Wait did that guy say it was from ?

Something they just noticed is that the characters don’t really have names.  PROFESSOR and PRISONER and etc.

[Ken Foree says “It’s dawn” when they step outside.]

Lovelock: Oh I GET IT.

Starkwell: I’ve said it before, I’ll say it again… CONSISTENCY is important.

The movie drags a little, but it is pretty action packed.  At the ninety minute mark there is an all out war between the surviving main characters and a huge group of zombies.  There is head splitting, gunplay, and Ken Foree saying cheesy one liners.  What more do you need?  Well, story, I suppose.

[Prisoner runs off into the sunset alone.  And it’s like it was set up for a sequel.]

Lovelock: I kind of wish there was a sequel.  I’d watch it.

Starkwell: Strangely enough, I think I would too…

Good?  Kind of, I guess.  Miles better than anything the Asylum puts out?  Absolutely.  By all rights, Lovelock and Starkwell should have hated this movie, but they didn’t.  They even, dare I say, had fun.  An unexpected delight.
Documented by Kev D. and Posted at 13:57