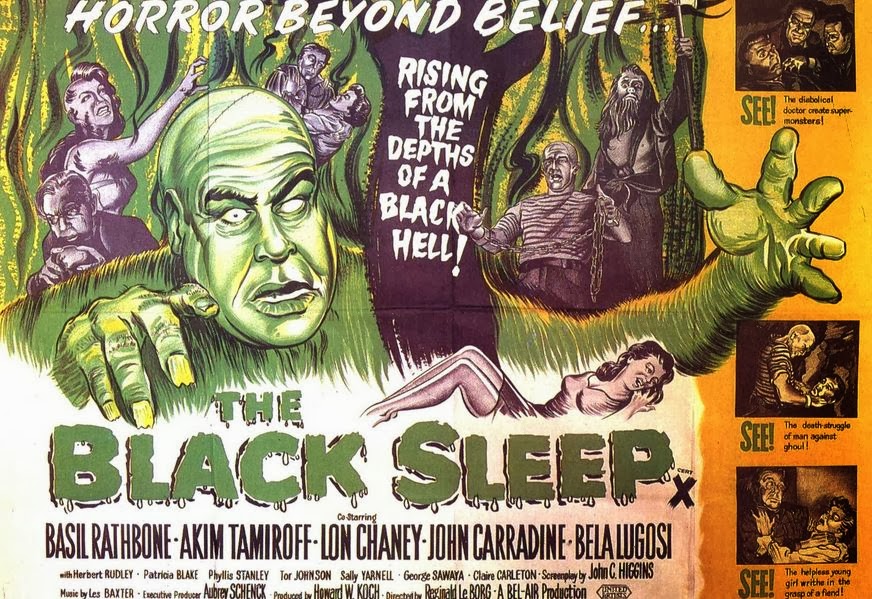 The film starts off with a really creepy narration about a drug that induces, I assume, “The Black Sleep”… Making the man like a dead man but not of the dead.  Also not of the living?  Remains to be seen.  As always with the older pictures, the soundtrack is wonderfully bombastic and the set design and locations looks like they were well thought out.  We’ll see how the rest fares.  Basil Rathbone, John Carradine, Lon Chaney Jr., Tor Johnson and Bela Lugosi all have roles in there, so it’s all a bit exciting.

Lovelock: Reginald LeBorg is a killer name… I’m just throwing that out there.

The story begins in a London prison in the late nineteenth century, were a dude, recently convicted of murder and whatnot, tries to explain to Basil Rathbone how he was framed.  Basil Rathbone gives the convict “THE BLACK SLEEP”, after which the authorities deliver the body to Rathbone.

Lovelock: So is he dead alive?  Or is he alive alive?

Lovelock: To me, it does.

[Convict sits up, Rathbone tells him everything, and tells him he has to become his assistant.]

Starkwell: I feel like something is gonna go wrong… otherwise where’s the movie?

Lovelock: I hope something goes wrong.  So far “The Black Sleep” is more like “Makes The Audience Sleep”.

The Convict’s name is Gordon Ramsay, which of course starts spurring all sorts of Chef Gordon Ramsay jokes (also saying things like “What a shame.”).

[They arrive at Rathbone’s super secret lab, and a woman is being chased by Lon Chaney… whose name is MUNGO.]

Lovelock: With a name like Mungo, what are the odds he would be a well adjusted fun-loving dude?

Starkwell: In 1872… was anyone well-adjusted and fun-loving?

Lovelock falls asleep during Rathbone and Ramsay’s breakfast conversation about Mungo and brain surgery.  Apparently Mungo used to be a guy named Dr. Monroe.  Rathbone wants Ramsay’s help to operate on Mungo and restore his Dr. Monroe-ness.  Why they would have started calling him Mungo, is beyond me.

Lovelock: You had to be loud, didn't you?  You had to wake me, didn't you?  Wait who’s Mungo?  So basically people were like, “woah Dr. Monroe has gone bananas, let’s stop calling him by his name, let’s call him MUNGO”?

Starkwell: It would be like if a guy went bald and everyone was like “no, he’s not him anymore, he shall now be known as SHINEHEAD”.

Lovelock: Might be your worst comparison of all time.

The story chugs along as Mungo continues to act like a guy named Mungo would act, and the Ramsay-Rathbone super surgery team cut into a dead dude’s brain.  There’s also a very old Lugosi playing a deaf-mute servant.  It’s kind of sad seeing him so frail, and playing such a minor role.  This was the last film he did before his passing.

[Rathbone is starting to not like Ramsay’s inquisitive nature.]

Starkwell: Why would you Black Sleep a smart doctor, if you’re basically looking for a helper monkey?

Lovelock: What? Sorry.  I couldn’t hear you over the sound of my BORED BRAIN CRYING FOR HELP.

[Ramsay has a horrible nightmare about dead people and the things he is helping Rathbone do.]

Lovelock: I won’t lie.  I wish he went all MUNGO on they asses.

Lovelock: Ugh.  All this waiting for something to happen is making me go mungo.

Then there’s a long drawn out creepy scene where the artist gypsy guy from the beginning drugs a girl and robs (?) her.  I hope that’s all he’s planning.  Ramsay and the only female character in the movie with dialogue seem to be investigating what is really going on with Rathbone, but I couldn’t keep track of it all, and Lovelock was asleep again so there wasn’t any conversation happening worth documenting.

[John Carradine plays either a crazy guy, or someone who is like eight hundred years old.]

Starkwell: I should have been paying more attention.

[In a dungeon they find a dude with a horribly warped face, who attacks Ramsay, and a once beautiful woman whose face is covered with patches of hair.]

Starkwell: Yeah, I definitely should have been paying more attention.

Honestly, Carradine fucking STEALS the show as an insane Gandalf.  His screaming wakes Lovelock up, who immediately yells out “YOU SHALL NOT PASS.”

Lovelock: I’m so mungo right now, you don't even know.

The Gypsy attempted to bring that girl to the doctor, but she was dead.  So, obviously, Rathbone decides to do his experiments on Female Lead.  The chain gang of crazy people, led by Insane Gandalf, comes out and eventually kills Mungo, sets fire to Rathbone’s nurse, and pushes Rathbone down a flight of stairs to his death.  So Ramsay and Female Lead walk away unharmed.  Then it ends immediately.  Not great.
Documented by Kev D. and Posted at 09:25