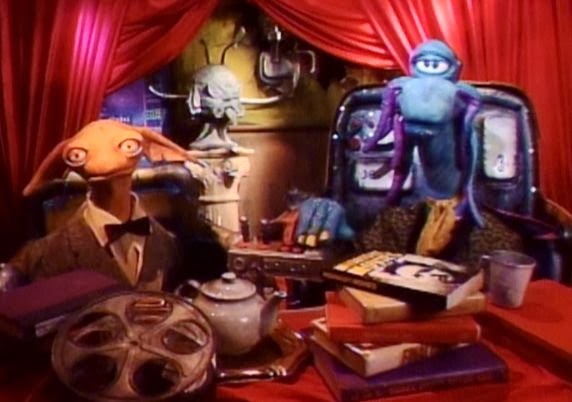 I don’t know much about the mid-nineties film “Shrunken Heads” other than the fact that Charles Band (and his Full Moon Pictures) is involved with it.  That COULD mean it’ll be good-bad, or could just as easily mean that it is straight up bad-bad.  The film starts with a bizarre fake movie review show starring two puppets.  It’s a little insane.  The puppets introduce the film, “Shunken Heads”.  Danny Elfman, of “The Simpsons Theme” did the theme for this film… and is apparently the director’s brother.  Weird.  Almost as weird as a puppet movie review show introducing the movie.

[A gang of bad boy teens led by a guy named BOOGER pushes a nerdy black kid off of his bike.]

Lovelock: Is the guy on the bike Urkel?  I hope so.

Starkwell: I think that’s racist.  I’m not positive, but I think it is.

There’s something about Full Moon pictures releases from the mid-nineties… they have an almost magical quality to them.  And by magical, I mean truly abysmal.  The main character Tommy works at his dad’s corner grocery store, and he and his “sidekick” Bill, as well as their new friend Freddy (Urkel), head over to Mr. Sumatra’s magazine boutique to check out comics.

[Mr. Sumatra is from , and gives Bill, a self-proclaimed jelly-bean junkie, some sort of Haitian (I assume Voodoo) jelly-beans.]

Starkwell: I guess no one reminded these kids not to take candy from strangers.

Lovelock: From the looks of Bill, I think we can assume he takes a lot of candy.

While Tommy, Bill and Freddy read their comics and eat jelly beans (while sitting on what looks like a trash pile), the “gang” from earlier come back… I think they’re called the “VIPERS”.  Mr. Sumatra scares the gang off.

[Mr. Sumatra blows… pixie dust (?) on the “Vipers” car as they drive away and they crash into a tree.]

Lovelock: It’s hard to look mystical and tough when you essentially look like you just blew them a kiss.

As Bill and Freddy walk the streets at night looking for adventure, Sally shows up at Tommy’s place and climbs up the fire escape to make out with him.  All the while, Starkwell and Lovelock are wondering where all of the people are on the streets, and why these kids’ parents don’t seem to give a rat’s ass that they are just wandering the streets at night alone.  Then the puppet show from earlier interrupts the scene and says “we’ll be right back” THEN COMES RIGHT BACK.  I guess this was made for TV.  This happens every twenty minutes or so for the length of the film.

Lovelock: I actually could have gone for some commercials right now.  Might have helped with the boredom.

[Tommy films the Vipers stripping a car and they get arrested, everyone except Vinnie.  Vinnie goes to see the MAFIA.]

Starkwell: You’d think if they were backed by the mob they’d be doing better than stealing rims off an old lady’s car.

Lovelock: And you’d think they could get more professional looking gang t-shirts.

[The don, named Big Moe, and played by a woman (not sure why), snatches Freddy, Tommy and Bill.]

Lovelock: Alright, I don’t know who’s dying and who’s coming back through Mr. Sumatra black magic, but that shit needs to happen soon.

Lovelock: I think THAT is racist.

[Big Moe tells the Vipers to kill the kids.  They do.]

Starkwell: So they went from pushing a kid off a bike and stealing comic books to GUNNING DOWN CHILDREN.

Lovelock: And still, no sign of ANY of their parents.

[Later at the three-kid joint-funeral, attendance was low, with only Mr. Sumatra, Tommy’s dad and Tommy’s girlfriend Sally showing up.]

Starkwell: Harsh.  No one for Bill or Freddy.

[Then it cuts back to the puppet show for like two minutes and it sucks, even worse than the film sucks.]

Mr. Sumatran steals the kids from the mortuary, saws their heads off and starts boiling them up in a huge cauldron with a dead cat.  He shrinks their heads, puts on a bad ass cape and uses BLACK MAGIC VOODOO to re-animate their heads, tiny as they are.

[Mr. Sumatra throws the heads around the room to show them that they can fly… he trains them in… the ways of the force? Then the screen flashes “ONE YEAR LATER”.]

Lovelock: They trained for a year?

Starkwell: So they have mind powers and can shoot electricity?

[By the end of the year, they seem to be acting more like Mr. Sumatra’s slaves.  Then they fly through the city fighting crime.]

Lovelock: Is this fucking happening?

Starkwell: Why does Bill have vampire fangs now?

Lovelock: When they revived, they were themselves… but now they talk like killbots.  DA FUCK?

This movie makes no sense.  Bill no longer craves jelly beans, but rather eats people and sucks their blood?  Then Tommy goes spying on Sally while she sleeps.

[The two muggers that the HEADS killed suddenly get back up as zombies and start walking around.]

[The zombies, instead of eating people, go around cleaning up litter…. And for some reason… farting a lot.]

Lovelock: I retract my previous statement.

At this point, the heads finally start going after the Vipers.

[Tommy zaps Sally’s head and shows her everything that he has been through, starting with his murder.]

Starkwell: Why would you want to show her Mr. Sumatra sawing their heads off?

[Tommy flies up her shirt, and rubs himself between her breasts and flies away.]

Starkwell: He’s easily as much of a rapist as Vinnie.

Sally goes to see Mr. Sumatra and asks to see Tommy.  Then she opens her blouse and lets him fly in and stay there.  And the scene lasts like two minutes.  I believe it was Lovelock who wondered “WHERE ARE HER FUCKING PARENTS!?!?!”  Sometime shortly thereafter some Zombie Vipers come after Vinnie and he fights them, and they fart a lot.

Lovelock: Best line ever… “Are you ready for capital punishment… Haitian Style!”

Starkwell: Does anyone else find it creepy that Mr. Sumatra asked Sally if she was a virgin, and then asked her to go to his bedroom and dress up in a gown?

Lovelock: It is a touch creepy, yes.

shows up with dressed-up Sally, the heads and a small army of zombies to take care of the remaining Vipers and Big Moe and his/her mob. After some complications and a terribly slow and long car chase (during which Freddy’s head gets run over, and Bill gets blown away by a shotgun) Tommy crashes through the windshield and flies directly into Vinnie’s mouth.

[Apparently the Zombies will continue to walk the Earth until they dissolve into a brown liquid.]

Starkwell: This movie is a brown liquid.

So now, apparently, Sally is a high priestess of the voodoo and owns the flying heads, and she will use them to fight crime from now on...  I think.  The end.
Documented by Kev D. and Posted at 12:05