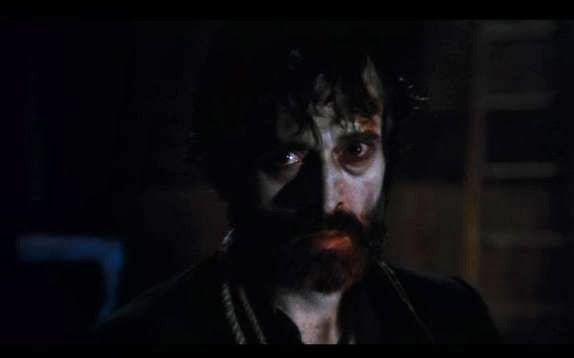 It’s hard to believe that I’ve waited this long to show SUCH a classic film to Lovelock and Starkwell.  But then again, I waited three hundred movies before showing them “Night of the Living Dead”.  The DVD starts with a strange talking head shot of the director rambling on about the films many titles and telling us that he hopes we have a bad time watching it.  And then the film starts IMMEDIATELY, no menu.  Starkwell and Lovelock had better be ready.

[Dude closes up his art gallery and takes of for the holidays on his motorcycle.]

Starkwell: He’s running an art gallery, not a fart gallery.

Cool dude George travels through the city and, for whatever reason, the director decides to show a naked woman streaking though the city streets.  Eventually George makes it out of the city and hits the beautiful countryside.  George stops for gas, and a Redhead backs her car onto his bike.  Busts it up, and now he’s screwed. So then George tells Redhead “you’ll drive me where I need to go, and I’ll drive”.  Clearly he’s a man of action… he just goes for it.

[George RELUCTANTLY agrees to take Redhead to her sister’s before heading to Windermere.  With her car.]

Starkwell: He’s pretty much kidnapped her at this point.

They end up at a creepy farm.  This is after we hear over the radio that agricultural experiments are going on around here.  George sees the scientists with their experimental pesticide machine and tells them that they’re polluting the Earth and whatnot.  The idea of experimental pesticides bringing back the dead is, frankly, pretty ahead of its time.  Back at the car, the lonely Redhead sees a zombie and FREAKS OUT.  As the zombie chases her, Lovelock FREAKS OUT, plays air guitar and then does a handstand while Starkwell cheers.

[Redhead’s sister is batshit crazy and lives with a creepy photographer.]

Starkwell: He’s taking photos of the waterfall at night?

[Redhead sister is readying her arm for heroine when she is attacked by a beardy zombie.]

Lovelock: Wow, just looking at the syringe is making her TRIP BALLS.

[She leads the zombie to her photographer husband.  The zombie immediately bludgeons the husband in the head with a rock, and kills him.]

Lovelock: This turning out to be a real crappy day for George.

Starkwell: I’d argue that it’s a worse day for the photographer.

The cops aren’t letting George leave.  They also suspect that the sister, Katie, killed her husband, after they found her heroine stash.  All in all, the dialogue and acting aren’t bad.  George is pretty kick ass.  Rather than getting too uppity about getting to Windermere as planned, he decides to SOLVE THE MURDER MYSTERY with Redhead.

Lovelock: George is on the case!

Starkwell: I love that it’s her car, but George is the one that now drives every time.

Lovelock: She backed into his motorcycle.  Personally, I’d have her ride in the trunk.

[At the hospital, the newborn babies are being born with an almost HOMICIDAL RAGE.]

Lovelock: There’s no special effects there.  That’s a straight up zombie baby for real.

[Apparently the experimental pesticide makes pests go crazy and kill each other.]

Redhead and George continue to investigate what REALLY happened to Katie’s husband.  Redhead is convinced that a recently deceased homeless man committed the crime, George intends on setting her straight by going to the homeless man’s grave.  So… they go to the cemetery.

[George and Redhead are attacked by zombies.]

Lovelock: That’s why when the dead walk the earth, I never go to the cemetery.

George figures it all out.  The radiation from the experiment brought the dead back, because the nervous system goes on living after death.  And the zombies can revive other corpses with human blood, transmitting it like a virus.  I don’t know HOW he figured all that out, but he did.

[Zombies kill cop in the cemetery.  They eat his guts.]

Lovelock: This movie really has it all.  And I feel like every movie should have a guts eating scene.

Starkwell: Not sure if that type of scene can really fit in any movie.

Lovelock: Name me a movie.

Lovelock: Are you kidding me?  Imagine if they all started eating her after she goes down in the ring?  Way better.

Meanwhile George tries to get the scientists to stop their experiments and Redhead goes back to her sister’s farm, only to be attacked, of course, by zombie photographer.  I belive her arm gets bitten.  She goes a bit bonkers.

[She drives up the street and gets out of her car.]

Starkwell: Why would she get out of her car?

Lovelock: Who knows.  This is the girl that backed into a motorcycle at a gas station.

[Zombies tear open the lady receptionist's shirt, tear her breast clean off and then gut her.]

Starkwell: What is with the Spaniards and their insistence on stabbing/ripping/biting breasts in film?

Lovelock: Why mess with a good formula?

Then the cops show up at the hospital RIGHT as George finishes setting fire to all the zombies.  So they don’t see any zombies.  So they think he just massacred everyone.  So they kill George.  The film ends with the cop going home only to find ZOMBIE GEORGE!  Then zombie George strangles the cop and kills him.  It is a fucking bananas ending, terrifically depressing, and deeply satisfying, all at the same time.  But wait, where exactly is the Manchester Morgue?  Also, I guess he never made it to Windermere.
Documented by Kev D. and Posted at 21:06