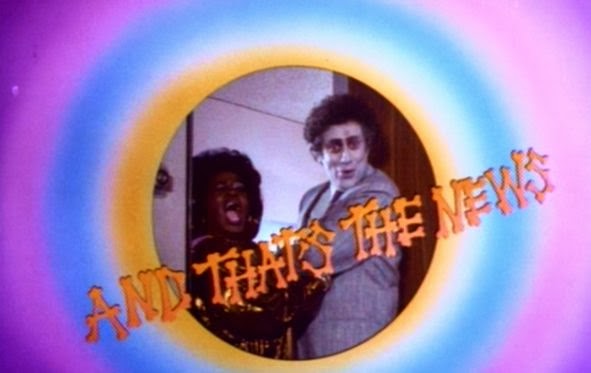 If Starkwell and Lovelock thought they were ready for “Dead Men Don’t Die”, as soon as it started, they IMMEDIATELY knew that they weren’t ready for it.  Nothing could have prepared them for this intro.  The film opens up with a cheesy “funk” song with a montage of Elliot Gould working on his news program.  He is the anchor.  Then it cuts to him witnessing a drug deal gone BAD in a parking lot.  I should mention that it is hard, from a look standpoint, to differentiate between Elliot Gould in this movie and Michael Richards as Kramer.

[Gould runs into the Haitian cleaning lady who is a horrible collection of racial stereotypes, and then decides to investigate the drug deal he just witnessed.]

Starkwell: Anything for a scoop?

The station director is all over them to get juicier stories so that they can get better ratings.  This is followed by a “comical” scene of them giving the news using EXTREME words like “shock” and “hooker”.  Honestly, the dialogue is hammy, but has a certain charm.  The music on the other hand has zero charm and is the worst synth soundtrack ever.

Lovelock: But then those futuristic synth sounds bring you right back to the early 80s.

In his search for THE BIG SCOOP, Gould gets caught by the drug dealers he was investigating.   Gould tries to run away but the drug dealers chase him down.  He tells them that they have a "shot at the Barcelona Olympics".  Then they kill him.

[Gould’s co-anchor finds his dead body… WHAT A SCOOP.  She runs away to get her camera.]

[Chafuka takes the corpse, because, obviously, she has been waiting her whole life for a corpse.]

Lovelock: Did you call her Aunt Jemima?  That’s way racist.

Chafuka takes Gould to her voodoo layer, hidden behind the lockers in the boiler room to do voodoo on him and sing.  Meanwhile, there’s a goofy detective who has been put on the case of the missing body.  After more singing and voodoo, Gould rises.  Sadly, he is not himself.  He is essentially a monkey.

[Crappy synth song I can only assume is called “Back in the Land of the Living” (they say it a hundred times) plays while Chafuka drives Zombie Gould to her house on her crappy motorcycle.]

Lovelock: There is going to be an awful lot of DEERRRRRP in this sucker.

Lovelock: Why does he have an afro now?

Chafuka apparently intends to be Gould’s zombie master, and make him do the news, and take all of his money.  She is telling everyone that she is his new manager.  It’s really stupid.  Really, really stupid.  Oh no!  The make-up girl has her work cut out for her!  Gould is unable to talk, so Chafuka talks into a voodoo doll, and it makes him say what she says.  So then he reports the news BADLY with a thick Haitian accent.  "Let's be talkin' 'bout dem news" and so on.  Did I mention that this is dumb?

Starkwell: That is officially the THIRD time that the mic' descended down into the shot.

Lovelock: He is the worst zombie ever.

Lovelock: And now there are two of them.

[Drug Dealer Zombie #1 kills Drug Dealer #2, who is then voodooed into a zombie immediately.]

Co-Anchor and the Dumb Detective go around trying to figure out what is going on… I’m not sure why NO ONE ELSE is in the studio except for the main characters, but there’s a lot of dumb shit that happens, including kicking zombies in the nuts, a dude being electrocuted and dancing, zombies dancing, zombies driving, a zombie grabbing the detective in the nuts and a bunch of other crap.  Eventually the film ends with Chafuka and Dumb Detective taking over the news station using the zombies as their puppets.  Might have been good if wasn’t so boring, or so monumentally stupid.  Seriously, you don’t even know.
Documented by Kev D. and Posted at 09:00