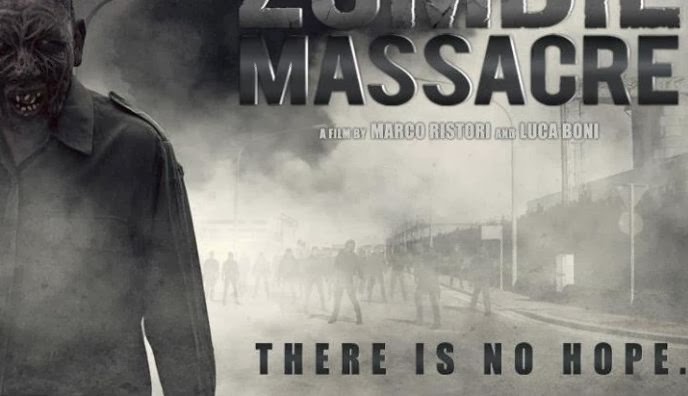 It was only a matter of time before Starkwell and Lovelock would be subjected to another Uwe Boll film.  “House of the Dead” may indeed have left a horrible sour taste in their mouth, but I’m sure it may end up looking like Academy Award material in comparison to some of his more recent work.  I’ve seen “Blubberella”, and if this is anything like that film, Starkwell and Lovelock may only last a few minutes.

[Zombie outbreak is in full swing.  Zombies are rabid-style and have melty skin like Darkman.]

Starkwell: Well, the production looks to be a step up from “Blubberella”.

Lovelock: The tagline is right.  There IS no hope.

As the credits roll, it becomes evident that Netflix lied to us, and that the film is merely produced by Boll, but actually written and directed by two other fellows.  There was much rejoicing in the room upon this realization, and I believe Starkwell said the bar just emerged from the ground.  Apparently the film also goes by “Apocalypse Z”, cementing that this is a mockbuster of sorts, trying to cash in on “World War Z” and the current zombie fad.  These are all tell-tale signs that the movie Starkwell and Lovelock are about to watch is really bad.

[American politicians put together a super team to fight zombies.]

Lovelock: They certainly gave him a shitty office.

Starkwell: Shot on location in the director's basement.

There was a horribly long conversation about eating and sex involving some soldiers.  It was the worst.  Ten minutes later, and they’re still just talking.  Not much in the way of zombies or massacres for a movie called “Zombie Massacre”.

Lovelock: It should be called “English Language Massacre”.

Lovelock: Did he just say “Or I push ze red button?”  What the…

Starkwell: They clearly have SOME American actors in the film, why did they need to cast people with thick accents as American Politicians?

Starkwell: "I give you ze money, but you make me play ze President.  OF ZE WORLD."

Anyways, the zombie kill squad goes around killing zombies and trying to save the world, I think.  Everything is very by-the-numbers, but it’s not even done with any style or panache.  There is also quite a bit of needless “slow-mo”.

Starkwell: If they just put the slow-mo in regular speed, we’d probably get ten minutes of our life back.

Lovelock: If we push the button for fast forward, we might be in luck as well.

Lovelock: Why would the sword wielding red-head be dressed like that?

Starkwell: Why would there be a redhead with sword skills?

Lovelock: In a world with Uwe Boll as POTUS, anything is possible, I guess.

Starkwell: And why is her hair like that?  Oh man, I hate this movie.

It’s the type of film where before killing a zombie, someone will say “hey baby, where have you been all my life”… which really makes absolutely no sense.  Think about it.  Think about how much that line makes no sense and sucks.

[Redhead does a kill!]

Starkwell: At least they left it in regular speed.

Then the group finds the daughter of the doctor who developed the weapon that created the zombies in the first place and its all like “yeah, let’s do this” or something.  Fuck I hate this movie.

Lovelock: As bad as this is, it’s still much better than an ACTUAL Uwe Boll film.

Starkwell: His involvement must have been fairly minimal, especially since there haven’t been boobies at every turn.

Lovelock: So, the American military are evil?

Starkwell: Who knows… this guy is British anyways.

Starkwell: Might have to do with the fact that you fast-forwarded through the last half hour.

Lovelock: I think I’d be lost either way.

[Super Mutant Zombie (aka guy in a rubber suit) attacks!!!]

Lovelock: I guess rubber suit is better than bad CGI.  So this movie gets a point for that.

Starkwell: So, that puts it at… one point.

Then there was a scene with slower than the swordplay martial art fighting and Lovelock and Starkwell started laughing really hard.

Starkwell: Did that guy say “let’s do this style”?  What does that even mean?

Lovelock: I’m not sure, but I’m certain that the film makers are even less sure.

The film ends with a scene featuring two topless girls swimming in a pool and suddenly becoming zombies and attacking people.  They have big ol’ honking implants, and we all feel that this must have been Uwe Boll’s input.

Lovelock: “Zis is not bad, but perzhaps zyou can putz some boobies into ze last scene?”

Starkwell: Nailed it.
Documented by Kev D. and Posted at 08:41