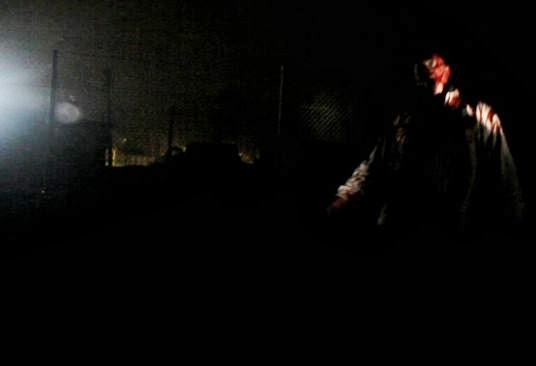 Apparently this happens after the first one, and they THOUGHT that they had the outbreak under control, BUT THEY DIDN’T. Shocker.  Anyways, found footage, first person view stuff has a tendency to get old fast, so we’ll see how long this one can go before it gets totally fucking stale.  I’m not entirely sure why there are two directors, but whatever.  It starts off with a very shaky hand held pointed mostly at the floor.

[Mother finds her daughter hiding in her room and gets caught by ZOMBIE HUSBAND/FATHER, the footage cuts...]

Starkwell: I know I’ve asked the question before, but who exactly is finding and editing these, you know, in the context of pretending that this is real?

[This film is set as a documentary about the world post-outbreak.]

Starkwell: So the documentary guy felt it was important to start off his doc with a shot of a family dying?

Lovelock: YOU’RE STYLE IS QUITE UNORTHODOX.  But effective.

Anyways, then the military staff at the hospital that the camera is following witness Hell breaking loose at the hospital.  And everyone is getting eaten.  They escape… but not before they find and rescue a perfectly made-up blonde girl with a pretty haircut.

[Soldiers explore a dark room with a flashlight.]

Starkwell: I guess they only filmed at night?

Lovelock: Just fucking go to bed, and then explore in the sunlight.  What’s wrong with these people?

The soldiers continue to explore rooms with flashlights, guns, and the occasional night vision camera.

[They nightvision into a room full of zombies.]

The footage randomly cuts to other footage, like people being executed by people in HASMAT suits.

[They run in the snow with flashlights, and then one cut later and it’s daylight.]

Starkwell: Blondie certainly looks all put together for someone who just apparently spent the night in the snow with nothing more than a windbreaker and a light fire.

Then the soldiers stumble upon a group of BAD DUDES who, I think, are raping a zombie?  There’s no real story at this point, it’s really just following soldiers as they try to survive.  Not necessarily a bad thing, but it’s a touch played out, at this point.

Lovelock: The guy filming… his name is JONESY.

Lovelock: Hopefully Eye Shadow’s name is like Spandau Ballet or something.

Lovelock: At least they deliver on some of the goods.

[Jonesy and company sit around the camp fire talking about their lives… they are interrupted by the sounds of the rape gang from earlier, who seem like they are about to rape a non zombie.]

Starkwell: Why do they always need to go that route in these fucking movie?

[Soldiers SNIPE some of them.]

Lovelock: So they can DELIVER on that wicked punishment.

[In the frenzy two of the soldiers die.]

Starkwell: All of this and Blondie still looks like she just stepped out of the salon.

Then the soldiers end up in a dark and snowy cemetery.  Starkwell and Lovelock can’t help but notice that the days seem pretty short, but both agree that they pick totally awesome locations for staging fights with zombie hordes.  By-the-numbers stuff, but executed nicely enough.

Starkwell: This shit was lame in the first movie, and it’s lame now.

Starkwell: That doesn’t even make sense.

Starkwell: No I know, but why?

Lovelock: Because this rape scene is le caca.

[The guy decides to cut her up with a knife instead.]

Well, while two of the guys were busy playing rape-knife, the other soldiers somehow got free and killed Rape Squad.

[They head into a seemingly abandoned military base.  It’s dark.  They have flashlights.]

Starkwell: One flashlight shot, fine.  Two, okay… still not terrible.  But this is like the seventy fifth.

Lovelock: How do they keep the camera charged?  My camera dies after like an hour.

Starkwell: Lucky for them their flashlight batteries last forever.

[Eye Shadow is trying to make a signal on the beach, hoping that a boat will see them.  The other soldiers abandon him.]

Starkwell: Geez… at least give him a flashlight…

[Eventually they all die, Jonesy turns the camera around, goes all “selfie” and blows his brains out.]

Lovelock: If only that was how all selfies would end.

I guess the boat came after all, since the twist at the end was that Eye Shadow was one of the guys in HASMAT suits executing people.  So, I guess the boat came after all.  Honestly, it wasn’t a absolutely terrible movie.  It ticked a lot of boxes, was a vast improvement on the first film… and yet… Starkwell and Lovelock frequently found themselves bored.
Documented by Kev D. and Posted at 17:29