Night of the Creeps. 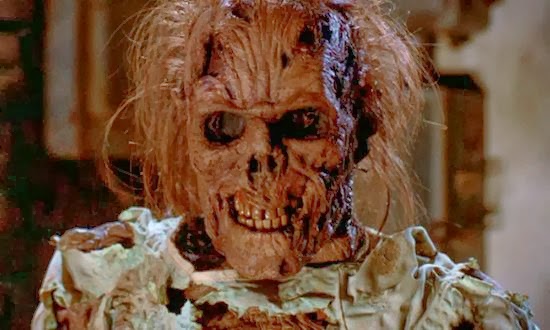 Considering Fred Dekker wrote “House” and “Night of the Creeps” in the same year, and later went on to pen “The Monster Squad” the next year, it’s pretty strange and kind of heartbreaking that after such a strong start, he’s only been involved with a handful of other projects, one of which was the third “Robocop”.  Also “Ricochet” with Denzel Washington?  Bizarre.  Let’s let Lovelock and Starkwell enjoy his best known work.

Starkwell: For such an advanced species, with all the space travel and whatnot, you’d think they’d have pants.

Lovelock: I’m thinking nudity is the next evolutionary step.

Starkwell: No.  Wrong.  Please pt your pants back on.

The movie gets going pretty quickly, in black and white, in the fifties.  There is a story circulating about a psycho killer on the loose.  Two teens go to investigate something that flew down from the sky.  Something happens to Johnny when he finds the thing from the sky, and the psycho killer kills the girl.  Then we flash forward to the present day (a.k.a. 1986)… and let me tell you, the eighties are in full swing.  We are introduced to our team of nerds (the good guys) named J.C. and Chris.  Chris is “in love” with the girl, Cynthia, that he just saw for the first time ever.

[Chris decides that if they join a fraternity, he might have a chance with her.]

The frat brothers ask them to steal a corpse.  They manage to get into a super secret lab where they have Johnny’s corpse cryogenically frozen.

[They thaw out dead Johnny.]

Lovelock: So, they’re not only able to get into a super secret lab, but they figure out how to thaw out the science experiment.

They discussed how dumb this was, for a while, but then we are introduced to Tom Atkins’ character and his “THRILL ME” tagline.  Lovelock stood up and said THRILL ME and did a roundhouse kick with a huge smile on his face. Zombie Johnny stumbles upon Cynthia’s sorority house and then his face splits open and a bunch of slugs shoot out of his body and slither away.

[All in the span of five seconds we get everyone’s last names… Cynthia Cronenberg, Chris Romero, James Carpenter Hooper, and Detective Landis…]

Lovelock: Makes me want to start over and see if we missed any.

Cynthia goes to find Chris and J.C. and tell them that she saw the dead body up and walking.  Meanwhile, the outbreak is in pretty full swing, and more dead bodies with exploded heads and slugs start cropping up.  Then J.C. gets SLUG POSSESSED.  Also, apparently Tom Atkins killed the psycho killer back in the fifties and buried him.

[Psycho Killer erupts from his burial through and old woman’s floor, still wielding his axe, and kills the old woman.]

Lovelock: That.  Was.  Awesome.

Starkwell: Admittedly, that is one of the strongest rise from the grave scenes I’ve seen in some time.

[Atkins goes to the old house, shoots the Zombie Psycho Axe killer in the head with a shotgun and his head explodes into slugs.]

Lovelock: I can’t help but wish for longer zombie content.

[They then show sorority girls showering and washing their boobs, getting ready for the formal.]

Starkwell: More boobs than zombies?  Pretty weak, if you ask me.

Lovelock: I wasn’t asking you.  Still, while I appreciate dem boobs… yeah, I wish the Axe Zombie had a longer run.

J.C. left Chris a message, detailing that he was possessed, that heat or fire seems to kill the slugs, and that he was heading to the furnace to incinerate himself.

[Chris finds dead J.C. with a bunch of charred slugs.]

Lovelock: I’d like it go back to juvenile, with zombies and boobies… I don’t want J.C. to be dead.

[Tom Atkins goes to get a flame thrower from the department.]

Starkwell: The cops have flame throwers?

Lovelock: There’s a dead dog walking around shooting slugs into peoples’ mouths.  I think we can buy a little policeman flame thrower.

Then Chris teams up with Atkins.  They find zombie Brad, shoot his head and flame throw the slugs as they explode out of his head.  It’s fucking amazing.  The sorority house is surrounded by zombies, and Chris, Cynthia and Atkins fight them off.  Atkins spouts out some SERIOUS one liners and Starkwell and Lovelock high five and then Lovelock does a spin dance move and then the splits.

[Chris kills a zombie with a lawnmower.]

Starkwell: And here I thought that “Dead Alive” did that first.

Lovelock: You learn something new every day.

Atkins finds the slug hive and blows the whole fucking place up, and sacrifices himself.  Following this, Lovelock let out a somber “thrill me” while bowing his head.  The movie ends with a burnt zombie falling over next to a cemetery exploding slugs towards the graves… and a huge spaceship surveying the are.

Lovelock: So… to be continued?

Starkwell: No one noticed that enormous spaceship?

Lovelock: The aliens were like, midgets… maybe the spaceship is really small.

Great movie.  Consider us all thrilled.
Documented by Kev D. and Posted at 20:24