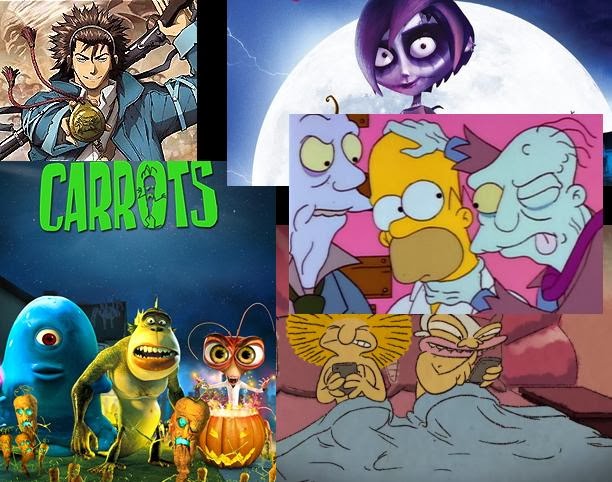 Thus far, Starkwell and Lovelock have been none too impressed with cartoon zombies.  I don’t mean the zombies in “I Am Legend” (burn), but rather, what I mean is zombie films that are entirely animated.  It’s no secret that their tendency is to prefer old campy sludgy special effects, and old campy sloppy movies… so cartoons are a tough sell.  Let’s see how these ones do against them…

The “Resident Evil” animated films also hailed from , so just because it’s all ANIME and and shit, doesn’t make it an obvious cool choice.  This director eventually went on to direct “Animal Crossing: The Movie”… so I don’t know what that means…

[The narrator explains the story in Japanese.  The subtitles are… in Japanese?]

Starkwell: Is this a joke?

Lovelock: Well, at least I don’t need to even try reading and can just make up my own story…

[Once the dialogue starts, there are English subtitles for that.]

[Main character meets a guy while walking through the desert… this guy has a pet bat who looks all cute.]

The cartoon moves pretty quickly, not sure what direction it is going in… we’ve seen the main guy fight and kill a bunch of man-eating desert lizard people.  So that was cool.  His desert friend is dead, but of course, the cute little bat survived.  From what we can gather, he is now going to go save the fiancée of the dude he just exploded to save his own ass from the cannibals.  I think he figths an evil emperor and goes to Hell?  I don’t know.  There is some fairly cool zombie content, they look decomposing, gross and awesome… and the whole thing is nicely put together.  Starkwell and Lovelock seemed pleasantly surprised over all.  Still though, fairly bored at times.

This will definitely be their first Mexican cartoon, but not their first shot at El Santos.  The live action version from the sixties had them cheering at times, so let’s see if a cartoon can get any of that positive reaction.

[El Santos smokes a joint and travels to a land of chocolate, tits and naked titty ladies squezzing their tits.]

Lovelock: Did WE smoke the joint?

[A green guy wearing sunglasses pulls a rabbit out of a hat/vagina of a naked woman laying on the ground.]

Starkwell: This is as good a time as any for me to take a break.

Shortly thereafter there was a song about how wonderful peyote is.  And they talked a lot about El Santos ex-girlfriend who has huge boobs.  Then El Santos gets on this whole thing where he says zombies in are not treated fairly, so they put together a “We Are The World” type of video about helping ’s zombie population.  Lovelock is seriously amazed.  This cartoon is fucked up.  But at times, pretty funny.  And it has some decent zombie content, though more comical than anything else.

[Final scene involves El Santos talking to an orange and pushing out a massive dump in a bathroom with booby-themed wallpaper.]

[They show his hairy asshole opening up, and he poops out a joint that he then smokes with Booby Girl, and then they get married.]

Lovelock: So, it’s saying that weed is the solution to all of life’s problems?

This is from “Dreamworks Spooky Stories: Volume 2”.  It’s a ten minute long short, so it shouldn’t take long at least.  It is from Dreamworks, so it should at the very least have some decent production value, like “Kung-Fu Panda Christmas”… right?

[The monsters are stuck in their house, surrounded by zombies and zombie carrots.]

Lovelock: See, now THESE people know what they are doing.

[The short film is short, but is a lot of fun, and manages to get more pleasure out of Lovelock and Starkwell in its short runtime than a lot of films, especially cartoons, do in full ninety minute runtimes.]

Ok, well, onto and a really cheap computer animated feature that promises o dazzle, bore, horrify and bore.  It’s the story of a non-conformist teenage girl who dies and comes back as a zombie.  She tries to get back to her old life with the help of her undead friends, but its all like DERRRRRRRRRRRRRRRRRRRRRP.

Starkwell: It’s only when you see a cheap cartoon that you realize how much better the big productions look.

Lovelock: Oh boy, this is gonna be a long one.

[Eighty minutes of this?  Sheesh.]

Anyways, eventually in her rebellion against her divorced parents she runs into a tree and dies and rises in the cemetery.  The animation isn’t QUITE as bad as Starkwell made it sound.

[According to this film, water, sunlight OR fire destroys a zombie.]

Starkwell: That would make the zombie apocalypse a Hell of a lot more manageable.

Lovelock: "It looked like the world would end.  Then it rained."

Anyways, she helps destroy evil and whatnot and ends up being returned back to life, but like, for real life, not zombie style.  Also, it may have all just been a dream.  Forgettable, and truly abysmal if compared to other full length kids features like “Paranorman”.

I figured it was good to end them on a high note.  They had a rip-roaring good time watching this episode, and then ended up watching half of Season 4, just for fun.  In the world of cartoons, whether we’re talking about films or television, The Simpsons really have done it all, and they’ve done it all so damn well.