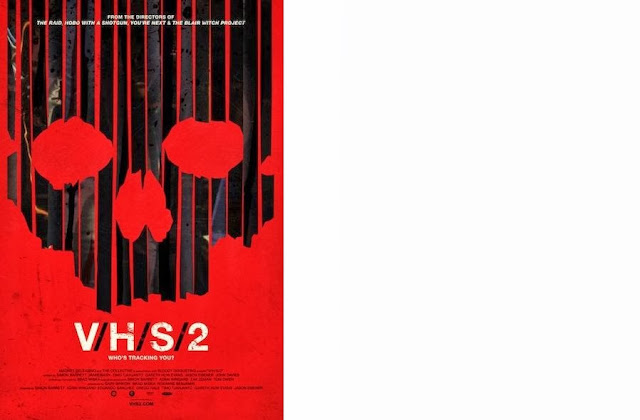 I quickly explained to Lovelock and Starkwell what the concept of the original “VHS” film was.  After this rough synopsis, they looked at me and said “another fucking anthology film?”  I doubt that they are the only ones thinking that at this point, and highly doubt that they are the only ones to go into this film with exceptionally low expectations.  The “frame narrative”, as it is called on wikipedia, is about a couple of private investigators that come upon a stack of VHS tapes while looking for a missing person.  They go through them.  The tapes make up the film’s segments.  The “frame narrative” story, if successful, creates an uncomfortable and tense atmosphere as we go from tape to tape. The first segment involves a clinical trial gone wrong where a dude can like see ghosts and shit.  It’s entirely filmed in first person view.  Lovelock and Starkwell complained about this saying “if I wanted this shit I’d play a video game”.  But the second one is a zombie story.

[Girl throws another tape into the VCR.]

Starkwell: Why would these videos even be on VHS in the first place?  No one would go to the trouble of taking their digital mountain biking helmet cam video and transferring it to a VHS tape.

[Biker on tape runs into a bleeding vomiting girl, she turns into a zombie, bites him… The ‘footage’ keeps cutting from the camera on the mountain bike to the one on his helmet.]

Starkwell: So… in this found footage universe, someone found his helmet cam AND his bike, uploaded both videos, edited them together complete with music, and transferred all of this to a VHS tape and then… sold it to the guy who’s apartment they are in?

Lovelock: So… you’re not even going to try?

Now the dude wearing the helmet cam falls over, vomits, dies, starts turning into a zombie.  So yet another first person view segment… with bad acting.

[Dude gets up and starts eating people.]

[He bites off fingers, now he’s trying to eat the guy’s leather wallet.]

Starkwell: Just what I was thinking.

[Now we get some footage from a video camera filming a girl’s birthday party, and helmet cam zombie shows up and start eating people.]

Starkwell: Okay, so they found the helmet cam, his bike cam, which is now miles away in the woods somewhere, AND some random person’s video camera and edited ALL THE DIFFERENT FOOTAGE together before transferring it all to a VHS tape?

[Helmet zombie picks up a gun and blows his brains out after getting a call from his girlfriend saying “I LOVE YOU”.]

Lovelock: And can operate a gun?

[Well, that’s the end of that segment.]

[The next segment is another zombie-ish one involving a satanic cult where a dude and his girlfriend give birth to Satan, I think.]

Starkwell: The segments are definitely a mixed bag.  This one rigth now is head and shoulders above the first two...

Anyways, the next segment continues down the found footage avenue, but involves a bunch of kids getting abducted by aliens.  It’s actually pretty sweet.  The segments got progressively better as the film went on.  All in all, this turned out to be a pretty good anthology film.  The segments themselves are a huge improvement on the original, but the first “V/H/S” tied its segments together in a better and creepier fashion, or at the very least, in a way that made the title more relevant. When you tie the whole thing together as if these are old VHS tapes hanging around some apartment where a guy collects snuff and whatnot, it seems to me they should do a better job in making the segments look like shit that would have been on VHS in the first place.  If you just want to make a found footage anthology, find another way.

[The “frame narrative” concludes with an undead (?) kid (the guy who’s apartment they’re at) and a possessed girl (the girl from the beginning who randomly dropped dead after watching some VHS tapes) attacking the private eye guy.]

[Undead dude gives thumbs up to the camera, roll credits, and ROCK song.]

Lovelock: Jumping the shark right at the last second.  Bravo.

The end.  Lovelock and Starkwell seem slightly more confused than usual.  I believe Lovelock called it “V/H/S Poo” at one point.
Documented by Kev D. and Posted at 23:57