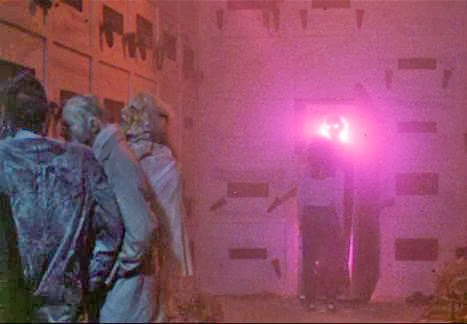 I knew I recognized that name!  The guy who directed this later went on to direct the sixth installment of the “Friday the 13th” films!  Regardless of what you may or may not think of what that film brings to that series' table, this is something entirely different, and involves a  girl trying to get into a club called (rather generically) THE SISTERS.  The Sorority Sisters? No just Sisters.  The picture looks alright on the print, but the sound is aggravatingly grainy.

[Coroners remove multiple dead girls, and one dead old guy, from an apartment.]

Lovelock: And… that’s normal to the coroners?

Lovelock: "Hey Jonesy, we got ourselves another lightning hands!"

Starkwell: " Just a typical Tuesday in the life of... A CORONER!"

We are introduced to a bunch of high school mean girls that plan on ‘initiating’ main girl, Julie, into their ‘sisters’ club.  Meanwhile, it turns out the old dead Hef was some kind of Russian magician or something.

Julie and her boyfriend, Steve, share a love montage at the arcade.  Playing video games, and taking pictures in the booth and all that shit.  I should mention that the high school kids all look to be well into their twenties and thirties.  Maybe it’s just the clothing, and lighting, and acting.  Then a journalist visits Magic Daughter and Batman to explain to them that he really was able to move things with his mind, due to bio-energy.

So now, because Julie stole Robin’s boyfriend Steve, Robin and the sisters (consisting of only two other girls) are sending Julie to spend a night in the mausoleum as initiation.  Why any girl would want to join a three person club that badly, especially one that consists of your boyfriend’s ex as the leader, is beyond anyone.  But Julie accepts, because she is an idiot, obviously, and she is then locked in a huge building with a bunch of dead people.  It has taken nearly forty minutes to get to this point.  Slow moving would be putting it mildly.

Lovelock: We get it.  It’s a mausoleum.  There are graves.  GET ON WITH IT.

[Her flashlight won’t light so she runs to the chapel to get a candle.]

Starkwell: Why wouldn’t she just set up her sleeping bag in the chapel where all the candles are?

Lovelock: Probably for the same reason that she wants to be in a club with people she hates.

The SISTERS are on their way to the mausoleum that night to ‘scare’ Julie.  Steve goes looking for Julie and can’t find her.  Luckily, he happens upon Leslie, who was just kicked out of the SISTER MOBILE for having second thoughts about this whole SISTER INITIATION thing.  Anyways, they all end up at the mausoleum, and after over an hour of NOTHING FUCKING HAPPENING, Starkwell and Lovelock all end up at BOREDOM.

[The grave of Magic Man is cracked, it glows red and makes stuff happen in the mausoleum.]

[Did I mention that we just passed the seventy minute mark?]

Finally one of the coffins poops out of it’s grave (yes, I meant to say poop), opens up and reveals a slimy-eyed undead grandpa of some kind.  It’s a rise-from-the-dead scene that makes the “Blind Dead” zombies' rise from their graves look fast moving.  Eventually, the corpse runs / floats / is-wheeled-towards-them-on-a-skateboard and Lovelock lets out a half cheer.

[Really fake looking Magic Man corpse erupts from his grave, shoots lightning from his eyes and reanimates the mausoleum’s population.]

Lovelock: That’s why I never have slumber parties in mausoleums.

Starkwell: You have slumber parties?

Lovelock: You know what I mean.

[Starkwell then promptly slapped Lovelock in the face.]

While a bunch of floating dead bodies surround two of the SISTERS, Lovelock sings the Phil Collins slow jam “One More Night” replacing ‘more’ with ‘dark’ and putting an emphasis on how he 'can’t wait forever'.  This movie feels like forever. Get it?

[Sister Kitty suffocates under a pile of dead bodies.]

Starkwell: “Ok, we’re going to lob a bunch of fake dead bodies on you and… GO!”

Lovelock: “Did we mention we covered them with slime and maggots? No? Too bad. ACTION!”

Eventually Magic Man’s daughter shows up and flashes a make-up mirror in his face and his head melts and all the floating bodies drop.  Who needs explanations when you have no story, I guess…  And then the film ends.
Documented by Kev D. and Posted at 10:46