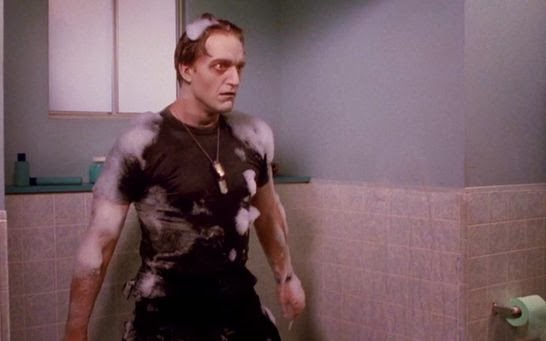 The mid to late eighties had a few horror genre “sequel in name only” releases that took their namesakes and blew them to smithereens.  “House II”, “Return of the Living Dead Part 2”, Hell even “Creepshow 2”.  “C.H.U.D. II: Bud the Chud” is no different, and promises to be an absolutely miserable film.  I can’t wait.

[Robert Vaughn is some Colonel presiding over the hearing where they are discontinuing the C.H.U.D. research.]

Lovelock: “CHUD 2” and “Zombi 5”?  This was definitely his golden age…

Starkwell: Did that woman say the "C.H.U.D. enzyme"?

Then there’s a "CHUD" that escapes his bed and runs around in the lab until they capture him by freezing him with fire extinguishers.  I think Colonel Vaughn intends on setting the "CHUD" loose in some small town.  On Halloween?  Not sure.  We were all busy bitching at how the "CHUD" isn't a "CHUD".  Then it cuts to the high school and we are introduced to Rebel Steve and Nerd Kev.

[Steve and Kev accidentally push a dead body on a stretcher out the delivery door at the school.  It rolls down a hill onto the highway.]

Lovelock: What high schools have unsupervised and fully uncovered dead bodies sitting in the storage room?

[They go to the hospital and steal a body.]

Starkwell: I’m guessing one that's run by the same people that run this hospital and leave a frozen Military-Owned "CHUD" unsupervised in a local hospital.

Starkwell: How did they get out?

Lovelock: Wait… is this “Weekend at Bernie’s”?

Starkwell: Also, no one ever found the original dead body?  The one they left rolling down the highway?

Lovelock: Maybe it's still out there, rolling from town to town, getting into adventures.

Lovelock: "Weekend at Bernie's" mixed with "The Littlest Hobo".

Steve and Kev reanimate the "CHUD" in the bathtub.  He gets out of the tub and slips on the floor.  DEEERrrrrrRRRRrrrrp.  Anyways, then Lovelock and STarkwell got into another lengthy venting session about how this “CHUD” is one hundred percent not a “CHUD”, but instead is just an undead dude walking around groaning like a monkey and/or Tim the Toolman.  Don't smell the dog food, silly "CHUD"!  Uh oh, the "CHUD" is chasing after the dog!  Now the dog’s a "CHUD".  DeeeerrrRRRRRRRRRRRRRRRRRRRRRp.

[There’s a “Bud the Chud” theme song playing over a montage of people getting all "CHUD".]

Lovelock: Every time they refer to one of these non "CHUD"s as a "CHUD", I think a little piece of me dies.

This movie sucks.  I’m fairly certain that no one involved with this hunk of shit actually ever SAW the original film. The guy who wrote this, Ed Naha, also wrote “Honey I Shrunk the Kids” the same year.  He used a different name, M. Kane Jeeves, for this one.  I don’t blame him.  I wouldn’t want anyone to know I wrote it either.  The ironic thing is that he also wrote the original “Troll” movie, a movie that had one of the most famously bad “sequel in name only” films ever produced.  “Troll 2” has no trolls in it, and let me tell you, if you’ve ever seen “C.H.U.D.” you know, this film has no "CHUD" in it AT ALL. Hate is a strong word.  And Starkwell and Lovelock agreed that in this case, it isn’t strong enough.
Documented by Kev D. and Posted at 07:16