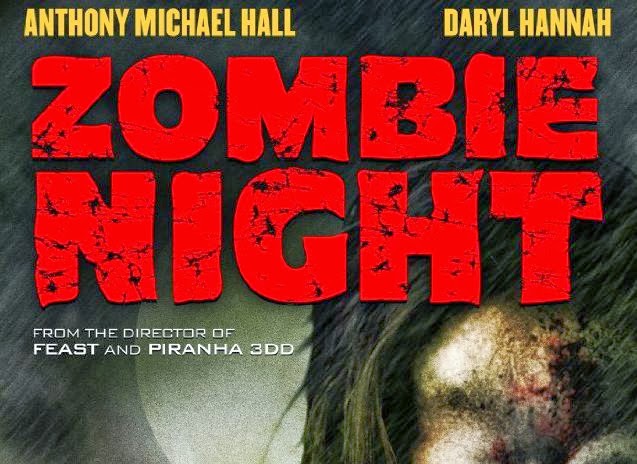 I’m not sure how these SyFy originals keep getting made.  Or how they seem to keep getting semi-decent actors.  Nick Lyon’s turds featured actors like Trejo, Levar Burton, Mariel Hemingway, even Ving Rhames.  This one, directed by John “Piranha 3DD” Gulager, manages to get Daryl Hannah and Anthony Michael Hall.  Considering the dude who wrote the story also wrote and directed The Asylum’s “Abraham Lincoln Vs. The Zombies” stinker, and previously worked on Playboy Videos, I’m not expecting Lovelock and Starkwell to be all that impressed.  What’s more, the screenplay was written by the same team that wrote “Rise of the Zombies” for last year's SyFy Orginal zombie piece of shit.  Yuck.

[Anthony Michael Hall and his daughters drive home, they hit a dude, it’s a zombie.]

Starkwell:  Well at least they’re not wasting any time.

Lovelock: Obviously they’ve stopped RIGHT next to a cemetery.

[A bunch of corpses rise from the graves.]

Lovelock: I’ll give it points for at least TRYING to having the vibe of the old school.

[They seem to be going with an older school approach to the effects as well, seemingly using minimal CG.]

It makes no sense, but somehow even though it seems like the zombies JUST started rising, it seems like looting and craziness is already breaking out everywhere.  It would take longer than that.  Hopefully.

Starkwell: It is actually sort of refreshing to see someone move away from the whole "rabid-virus" theme that plagues recent zombie fare.

Then Anthony Michael Hall loses one of his daughters.  She falls in a grave and is eaten.  He and the surviving daughter try to figure out what to do.  Anyways, the action continues pretty steadily as dead people continue to beat the shit out of and eat people.  Meanwhile, there was a scene where Daryl Hannah watches, through the peephole in her door, a girl get killed and dragged away.  It was legitimately pretty sweet.  We are also introduced to the family of Anthony Michael Hall’s daughter’s boyfriend.  The father is Cameron from Ferris Bueller.  Also, he’s a complete asshole.  For the next little while Lovelock and STarkwell didn’t say much.  This is all pretty by-the-numbers zombie stuff.  It’s all been done before, and usually much better.  But then again, often much worse.  There was a scene where Anthony Michael Hall killed a zombie with a wrench, and that was pretty sweet.

Lovelock: DEAD WEIGHT.  They need to lose that shit.  She’s gonna have a heart attack any minute and turn.

Lovelock: Survival of the fittest.  Or at least, the less old.

I think she’s practically blind.  And then, as Lovelock fucking called it, once she is put down in the basement, something startles the old bag and she has a heart attack and falls down dead.  When Daryl Hannah and Neighbor go to check on her, she attacks them.  Predictable, but still pretty sweet.

Lovelock: And that’s why, you always put the oldies in a home.

Starkwell: You are an awful human.

Lovelock: Awfully right all the time.

There are WAY too many characters in this thing.  That would be fine if they were developed at all, or at least if the acting and dialogue were any good.  But in an hour and a half, trying to squeeze this many people into the story feels forced and Starkwell is losing his patience.

[Some character leaves her kid in a room alone, and the kid ends up facing a zombie.]

Starkwell: This movie is just a series of scenes where people get left in a room alone and end up face to face with a zombie.  And then people come to check on them, and then it's like "OH NO TOO LATE".

Lovelock: I feel that basically nothing has happened so far.  This movie could have been two minutes long.

They are slowly losing their patience.  It’s not that the action is bad, it’s just that without a story of ANY KIND to really make any of it matter, all we are left with is meaningless zombie kills.  I’ve lost track of who’s who.  Daryl Hannah, I think, is married to Hall, but now I realize that the girl from the beginning who fell in a grave and was eaten wasn’t their daughter?  Who knows.

[Cameron from Ferris Bueller turns Hall, Hannah and family away, and then he wants to shoot his son in the head.]

[Since this movie is insanely fucking predictable.]

Lovelock: I feel like there's probably a good "Ferris Bueller" joke to be made here, but it's just been too long since I've seen the film.

The movie continues, SLOWLY, as they all fight for survival.  There’s a greenhouse scene that stuck out and was pretty sweet, but yeah, then it goes on seemingly forever and eventually ends, happily for a few of the characters I guess.  Overall this was a decent amount of fun and head and shoulders above the Nick Lyon SyFy Originals.  Still, all in all, it’s fucking awful.
Documented by Kev D. and Posted at 07:47