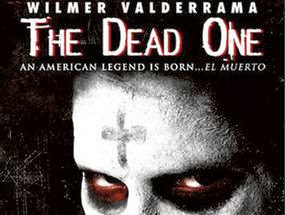 Also known as “El Muerto: The Aztec Zombie”, with a plot that sounds an awful lot like that of “The Crow”, Fez from “That 70s Show” plays a dude resurrected by an Aztec God.  The film was written and directed by a guy who also wrote and directed a movie called “Keepin’ It Real” with the tagline “This rapper’s got her moving to a different beat”.  So he’s potentially a jack of all trades, but also potentially a master of none.  It’s based on a comic book too, so promises to have a real comic booky kind of a feel.  Anyways, let’s let the jury decide.

[Flashback of as a kid, and some crazy old witch doctor places a bizarre curse on him and cuts his hand.]

Lovelock: That’s why I never follow creepy old Mexicans into a desert canyon.

Starkwell: Have you really ever been presented with such an opportunity?

Lovelock: Wait… I spoke too soon.  Seeing that, now, I’d TOTALLY follow a crazy old Mexican into the desert.

Then we are back to present day and is in love with the Preacher’s niece or something.  He apparently BLACKS OUT every year on the day of the dead, and THIS year, he woke up with a weird tattoo, went out that night, had visions while driving and drove his car into a tree.  DEAD.  Or… is he?

[ is suddenly laid out on an Altar and being torn apart by a pretty sweet looking Aztec Skeletor.  His LOVE for the woman brings him back to life. His eyes are all black.]

Lovelock: I’d rather stay back with Skeletor and find out what his deal is.

[Wait!  He’s actually been dead a whole year.  He woke up on the FOLLOWING year’s day of the dead.]

Starkwell: So, in “The Crow”, he comes back because he’s got unfinished business.  Unless he’s coming back to screw the Preacher’s Niece, umm… why is he back?

Lovelock: It means they don’t need a real reason.

After going to see his friend and acting all weird he blacks out and wakes up in the cemetery.  Oddly enough, his buddy doesn’t seem all that shocked to see his DEAD friend.  He’s kind of just all “what you doing here?”

[ steals some shit from an old lady’s store and then beats up on two dudes that tried to go get the stuff back once he realizes he feels no pain.]

Starkwell: So… basically he’s a criminal and an asshole?

Lovelock: Give him a chance… he’s only just now discovering his powers.

Starkwell: All pointless.  So far.

[I think Starkwell’s getting impatient.]

The story continues to unfold and it becomes clear that Aztec Skeletor is using to do evil stuff there on Earth.  is kind of half possessed, and half his old weeny self.  Skeletor takes over his brain when he goes to visit the Preacher though, and the Preacher dies, because rips his heart out.

[ shoots himself with the Sheriff’s gun, accomplishes nothing.  Sheriff dies of a heart attack.  revives him.]

Starkwell: He is just a terrible person.  What is the point of all of this?

Lovelock: The Aztec Skeletor is thinking pretty small if he’s going to all this trouble to just kill one Preacher.

Lovelock: Well, have him fucking DO SOMETHING.  is just walking around confused and freaking people out.

Lovelock: Right, but that’s ONE body. One body?  Come on Aztec Skeletor, you can do better than that.  This ain’t exactly Hell on Earth.

Starkwell: True.  Also the make-up job is pretty weak for an Aztec Skeletor.

Lovelock: Is it just me or did they suddenly drop the whole dilated pupils black eyes thing?

I think some creepy blind wheel chair woman just got possessed as well, but I haven’t got a clue.  The body count is now up to two, as another Priest is now dead.

Starkwell: There it is.  The point of all of this, coming in just over an hour into the hour and a half film.

Starkwell: She is quite homely, and tall.

Lovelock: Her huge Adam’s apple is the clincher.

[So, possessed old lady is Aztec Skeletor?  Why did they need in the first place?]

After some more inner struggling (and some serious YAWNING from Starkwell an Lovelock) Fez regains power over his own brain and eventually stabs the old man / old lady / Aztec Skeletor.  They leave it open at the end, as if there would be more of these.  This was an ‘origins’ sort of story for the hero he would then go on to be.  I guess FILM-WISE, that never happened.  Thankfully.  Not a terrible movie.  But it’s a pretty damn boring one, with some sizably confusing holes in the plot.
Documented by Kev D. and Posted at 21:21