Nazis at the Center of the Earth. 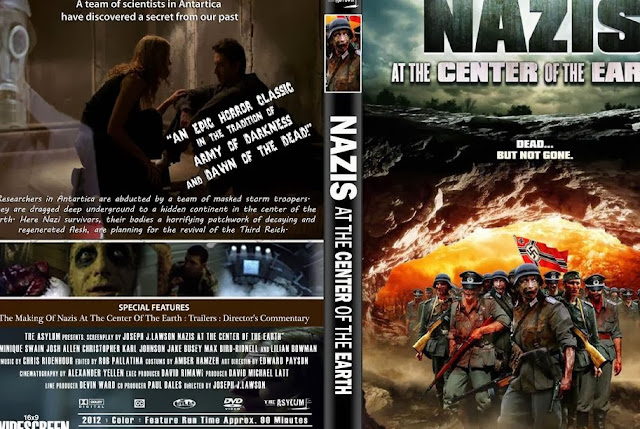 Well, it’s a movie from “The Asylum”, so you already know that there is a fifty percent chance that Starkwell will leave before the film even gets going, and at least a twenty-five percent chance that neither of them will finish the film.   This turd takes on the Nazi zombie theme, and hopefully isn’t too long of a film.  It starts off with a horrible action scene wherein Dr. Mengele escapes on a plane sometime at the end of the war I guess.

[Researchers digging (?) in find some kind of Nazi bunker (?)]

Starkwell: Wait, that’s supposed to be ?

Lovelock: That Nazi just walked up from behind them, what was he just hiding behind a bush all that time?

[Then something blows up, the explosion is blue and we’re all confused.  Apparentky the Nazis took two of the researchers and dragged them away.]

The acting is really really bad, even by “Asylum” standards.  I think Lovelock was the one who wondered how they found so many bad actors willing to be in a film.  Including Jake Busey.  The whole group of “researchers” (bad actors) go to find the missing researchers.

Starkwell: Good thing that the snow and heavy winds of have PERFECTLY preserved those footsteps that they are now following.

After expressing his desire to save the next hour of his life from the agony of watching this, Starkwell leaves.  Lovelock stays, actually a little intrigued.

[Mengele rips off a dudes face.]

Lovelock: Seems like a face wouldn’t just come off that cleanly…

It just gets worse and worse as the researchers venture into a “cave”, where Captain Jake Busey claims that they must be “fifty feet below the surface”.  Wow.  So deep.  I’m surprised they haven’t passed the equator yet.

[I guess Mengele took all of the researcher guy’s skin and put it on a Nazi?]

Lovelock: Can one just slip in and out of skin like a leotard?

Holy shit the girl slid down an icy hole to the like a scene out of “The Goonies”.  Then two of the researchers discover a whole word down there… that appears to have its own sun?  Also, what’s their plan for getting out of here?  They seem to be sliding down tubes and abandoning all of their gear… so…  Anyways, the whole group walks right into the Nazi building they found in this secret world and are immediately surrounded by a bunch of undead Nazis.

Lovelock: Hopefully they all just die immediately and the movie ends NOW.

[Captain Jake Busey is a secret Nazi and planned on bringing all of them to Mengele.]

Admittedly, this is bad, but it’s almost captivatingly bad.  The old actor dude playing Mengele is pretty sweet too.  So Mengele wants all of them to help him with his immortality / undead soldier research, and so far they’re playing along, I guess waiting for their moment to strike.  There’s no real explanation as to why Mengele looks EXACTLY as he did seventy years ago, but the soldiers are all rotting zombies.

[One of the women gets gang raped by a bunch of nazi zombies.]

Lovelock: Are they eating her or… ?

The movie makes little to no sense.  Also it sucks.  Lovelock just left.  He was just in time to miss Captain Jake Busey rip out his own baby fetus from his girlfriend and use the stem cells to revive Robot Zombie Hitler.  Oh also the Nazis have a flying saucer apparently.  It’s even worse than it sounds.  In the end, the UFO explodes over the Antarctic and the two surviving Americans jump out and find their jackets somehow.  I guess the UFO didn’t actually move at all?  And their jackets managed to find their way to where they ended up? Fuck dis shit.
Documented by Kev D. and Posted at 23:09