Legion of the Dead. 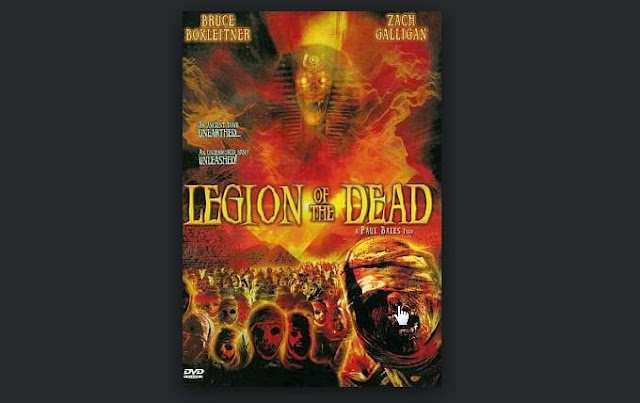 You’d think I’d learn from past experiences and stop feeding shitty Asylum movies to Starkwell and Lovelock.  But where would the fun be in that?  Although this is the director’s only turn in the director’s chair, he has written mockbusters like “The Da Vinci Treasure”, and produced bullshit like “Sharknado”.  This one explores the “Dawn of the Mummy” idea of using mummies as zombies.  Unlike that one where a bikini model photo shoot stumbles upon an Egyptian tomb, this one starts off with… dirtbikers stumbling upon an ancient tomb… in the middle of the ?

[Opening credits look like they come from a Shareware game.  The kind that came on floppy disks.   When I was a kid.]

Starkwell: Ugh.  I don’t know if I have the stomach for this one.

Lovelock: The ‘hieroglyphics’ look like crayon markings on posterboards.

Starkwell: If it looks like a potato, it's probably a potato.

More fastforwarding and WAIT, the Queen Mummy is apparently reviving.

[Queen Mummy sits up, is glowing red, and is naked.]

Lovelock: I guess back in the Egyptian Mummy times, the queen would often get breast implants.

Starkwell: And end up buried in California.

There’s a girl named Kevin who seems to have a dick (?)… I don’t know.  We’ve been fast forwarding a lot.  But I think the Queen pointed at a dick print in her jeans.  Basically the Queen is roaming around and sucking the souls out of dudes.  But she, for whatever reason, always gets naked right before she melts dudes.

Starkwell: Where is the ‘legion’ of the dead?

[Eventually a handful of Mummies do show up attacking some of them… they easily defend themselves with pool supplies like a Shepherd's Hook or one of those skimmer poles.]

Lovelock: I think the writers had a "Lesion of the Head".

After some more minor mummy mayhem, complete with mummies that belong in a “PARTYMANIA” or “HALLOWEEN SUPERSTORE” commercial, the main character(s) stop the Queen from sacrificing a virgin and start making out.  The girl named Kevin may or may not have a penis, I’m still not sure.  I am, however, sure that this movie sucks.  Ironically, the shitty song playing during the credits contained the lyric “fast forward gets me through”.  The band must have watched the movie too.
Documented by Kev D. and Posted at 22:04