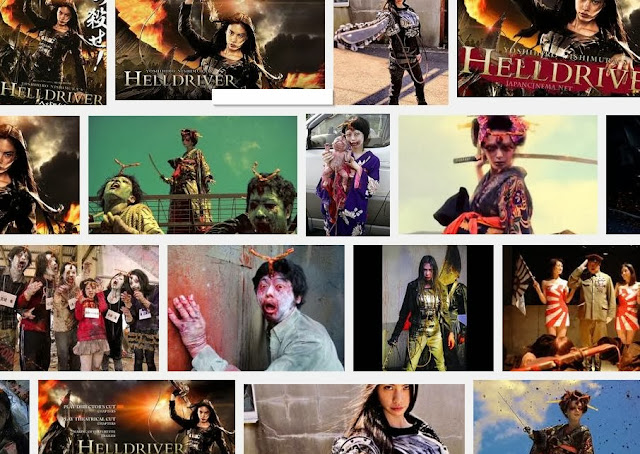 [Dude scales a wall, sits atop it, and feeds a severed head to a bunch of zombies.]

Starkwell: Is his suit electric?

Lovelock: The Japanese always have blue zombies, for some reason.

Then, to a soundtrack of gentle Japanese pop, Electric Ninja uses his grappling hook to rip off a bunch of zombie heads and rip off their horns (?) that they all seem to have growing out of their heads, and then falls off the wall and is swarmed by zombies.  Then a pickup truck comes flying in (doing flips and spins) bowls over the zombies and out emerges our heroine (I assume), Kika, wielding a chainsaw and doing pole-dancing moves while severing zombie heads.  Lovelock and Starkwell sit, as confused as these Japanese zombie films usually make them.

[Flashback to Kika’s past, where her crazy mother and the crazy mother’s crazy boyfriend are trying to kill her, and then an asteroid hits the mother and makes a huge crater in her chest, and then the mother rips out Kika’s heart and puts it in her crater replacing her missing heart, and then they both are covered in glowing gold goo, and shoot black smoke that covers Japan and turns everyone into zombies.]

Lovelock: Well at least the narrator is helping explain it.

Starkwell: Is the mother the girl from “Audition”?

Lovelock: I’ve blocked that film from my memory.

[Lovelock drops to the floor, weeping, in the fetal position.]

Then we see a montage of news footage and whatnot explaining everything.  The weird horn is apparently ground into a powder and used as drugs in this horrible future.  Meanwhile Kika is in a hospital, sleeping for a year, through the apocalypse where, for whatever reason, people eat fried cockroaches and the film makers have decided to show it.

Starkwell: I think they really fried those roaches!

[Lovelock started to respond, but then vomited mid sentence when the dude started chewing on fried cockroaches mouth open.]

[Kika wakes up, and is attacked by zombies and some sort of band of marauders, dressed like Klu Klux Klan wizards, then discovers that she has been turned into a cyborg superhero with a chainsaw sword.]

The fight goes on for a while, Kika soon realizing that even if you chop off a chainsaw wielding zombie’s arm, that arm will come at you with a chainsaw.  She saves two dudes, we’ll call them Hat Guy and Video Game Character, who then take her with them back to some drug kingpins that they are apparently selling horns to.  Hat Guy also apparently rescues orphans (?).

[Kika has a nightmare about her past with her mother, and then, in the present, the mother breaks out of her golden glowing cocoon to reveal that she is a super zombie.  The Queen zombie, if you will.]

Lovelock: Is that a giant chicken foot wrapped around her head?

Starkwell: I don’t know, but it’s kind of gross.

So amidst the whole “Kika wants to get revenge on her now Zombie Queen mom” storyline, there is also a larger plot wherein some rogue government dude wants to overthrow the president and launch a plan to exterminate all of the zombies.  This plan includes using Kika as the weapon that she was designed to be.  THE ULTIMATE ZOMBIE KILLER.

Lovelock: I’m not sure who the good guys or bad guys are in the government, I just know that I want Kika to kill Zombie Mom.

[President gives a speech, Rogue Diplomat Guy blows a whole in the wall and President is eaten.]

One thing is certain… the movie doesn’t skimp on blood and gore.  It’s fucking everywhere.  There’s a decent mix of CG and old school, making it pretty over the top and insane.  But in a good way.

The Rogue government guy has declared himself the new Prime Minister, and for some reason, now wears a military outfit and has a Hitler mustache.  Kika, Hat Guy, Video Game Character and the Drug Dealers have all been recruited to head into the zombie territory to find the queen.

[The group is attacked by a few hundred zombie heads being launched at them.]

Starkwell: The movie was doing so well avoiding that kind of thing too.

[Hat Guy, Video Game Character and Kika survive, saved by a Cowboy, that they just ran into… somehow.]

[A zombie feeds on a bouquet of severed penises.]

Lovelock: And just like that, they lower THE WHOLE FUCKING MOVIE.

Lovelock: , we have a problem.

[School Girl has her shirt ripped open, zombie bites her bare breasts for a little while, and then she is held down while she squirts blood out of her nips like a firehose, as her breast are milked by the surrounding zombies.]

Starkwell: And, that’s my cue to leave.

There really is a strange split.  It feels like two different films, the one before the credits in the middle, and the one after.  Even the special effects seem to have gotten worse.  Why would a shotgun blast make their heads blow up in a little burst of flames?

The next half hour was basically non-stop action, for better or for worse.  There was a zombie baby, naked spider girl zombie fighting with a fork, a zombie car made out of zombies, a zombie getting chainsaw sword up the ass for like two minutes, and eventually, Hat Guy yelling BANZAI as he “kamikazes” himself off of a cliff.

Lovelock: How is there still another twenty five fucking minutes?

[Zombie Mom sits atop a Colossus Giant made out of zombies.]

They fire a missile at it, it partially explodes, but then the chicken foot alien creature sitting atop Zombie Mom’s head starts conducting the zombies like a symphony.  Then the Giant Thing catches the next two missiles and uses them like jet engines and turns into a huge plane made out of zombies.  Lovelock’s brain breaks.  He was trying to say something, but it was just coming out as a series of confused grunts.

Lovelock: I think it’s safe to say that I am completely desensitized to spurting blood at this point.

Definitely WAY too long, but if you go in knowing that it’s just a nonsense ride of zany insanity, you’ll come out pleased as Lovelock did.  Or you’ll leave long before it’s over, as Starkwell did.
Documented by Kev D. and Posted at 09:01