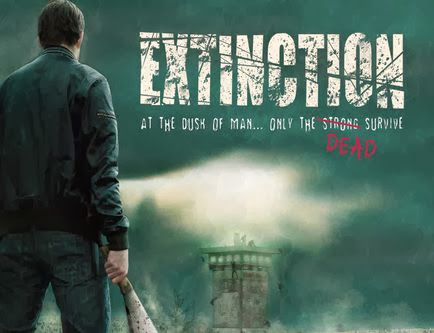 After trying to make Netflix start this movie TWICE and having it somehow exit to the Blu-Ray player’s home screen both times, the movie actually started playing on the third attempt.  If ever there was a sign that the Universe is telling us not to bother with a film… But, Starkwell and Lovelock are dedicated, and decide to press on.  The film has a long running time which obviously has all of us concerned, however, at the very least, within the first five minutes, it’s clear that the production value is above a lot of the garden variety cheap as balls Asylum-esque material that is generally passed off as zombie fare these days.  But again, that doesn’t mean anything yet.  Put lipstick on a pig, it’s still a pig.  But then again, sometimes pigs are cute.  After a scene of a dude flipping out and saying that everyone is dead, we get the title shot… apparently it’s ACTUALLY called “Extinction: The G.M.O. Chronicles”.  Then the main guy puts a gun to his head and the movie is all “3 DAYS EARLIER”.

[Dude drives around, zombie mayhem is all around.]

Stakwell: They look like Lou Ferigno as the Hulk, except rabid.  And not as jacked up.

It’s a German movie, so all of the actors have accents.  It’s not like the film is set in the states either, so it’s strange that the characters would speak English.  But there is decent character development so far, and though the film hints at the fact that it will be pretty slow moving, it hasn’t gotten boring… yet.

[Main character is hauled up in an old military base, and kills slow “walkers”.  Apparently, there are also “runners”.]

Starkwell: So… absolutely nothing new under the sun?

Starkwell: I guess.  Well, at least it’s competently made.

[You’d be surprised, but COMPETENCE really makes a zombie film stand out in today’s overcrowded market place of mockbusters and turds.]

[The zombies hibernate at night.]

Starkwell: So it’s just “I Am Legend” with an AM/PM switch?

Lovelock: I don’t know, I thought it sounded cool to say.

[Main Dude, Tom, runs into some other survivors.]

Starkwell: The accents are kind of… WHY WOULD THEY BE SPEAKING ENGLISH?

Lovelock: I’m gladly, since because there ain’t none subtitles.

[The survivors have an American with them.]

Lovelock: There.  There’s a reason for them to be speaking English.

[The survivors, one has been shot, all head back to Tom’s base with him.]

There are definitely all sorts of weird things going on with the zombies.  There are different types.  Some run, some walk, some hibernate, most can’t move unless they are in light… interesting ideas, but a bit scattered at the moment.  The zombies definitely have varied behavior, and seem to have some reasoning abilities… again… only some of them.  Lovelock and Starkwell are both curious and intrigued to see where this is going.

[During one of their recon missions they find a survivor guy named Luke, who has apparently survived off of toilet water and toilet paper.]

Lovelock: It’s not a bad idea… Your shit would wipe your ass on its way out.

Starkwell: Well, I’m gonna say it.  This movie is too fucking long.

They’ve collected a bunch more survivors at this point.

[Toilet paper eating dude gets yellow dust spit in his face by a zombie.]

Starkwell: That looked like pollen… is this a plant thing?

Lovelock: It’s anti-vegetarian.  The plants are fighting back!

Starkwell: So, zombies plus a dash of that M. Night Shamadong movie?

Lovelock: I’m pretty sure that’s not his name.

One of the main-ish dudes dies and it drags a bit and Lovelock is all “ah let’s go movie hurry up”.  I don’t blame him for feeling this way.  We’ve had a good ten or so minutes of focusing on the main girl’s slow emotional breakdown, and Tom’s compassionate leadership, and shit.  Maybe more.  It’s hard to tell.  It feels like time is standing still.

[Interesting turn of events, Tom sees a special queen (?) zombie, that has no eyes and shrieks to call all of her zombie minions.]

Lovelock: This should have happened forty-five minutes ago.  It’s too late for me.

During the five minute long soccer scene, Lovelock fucked right off.  The film keeps on going… it reminds us all of that Canadian film “Autumn” in that it is quite epic and large in scale, has a fairly interesting story, and takes the time to develop characters.  But much like “Autumn”, it takes an awful long time to really get anywhere and should be way shorter.  Be less movie.  That’s my advice to this movie.  And to “Autumn”, for that matter.

[They go to find Tom’s sister, she’s a zombie, but somehow her baby is alive.]

Starkwell: Right, because babies don’t need much to survive…

Lovelock: I thought it would be done by now… there’s another twenty minutes left?  Good God…

Then during a fight with the Hulky green giant zombie, Tom trapped it in a car and blew up the car with his bow and arrow.  Then the group ended up with a creepy priest, and I think they know what’s causing all of this, and then there’s romance and then I don’t know.  The zombies show up at the castle and these are the night kind that are afraid of light and seem to be painted up with the always offensive BLACKFACE, and we are ALL just as confused as ever.  The movie ends with the surviving characters shoving off for   And then TWIST, the baby is infected!

Lovelock: There’s nothing quite like hinting at a sequel that will likely never happen.

Starkwell: Correction - a sequel that will THANKFULLY never happen.