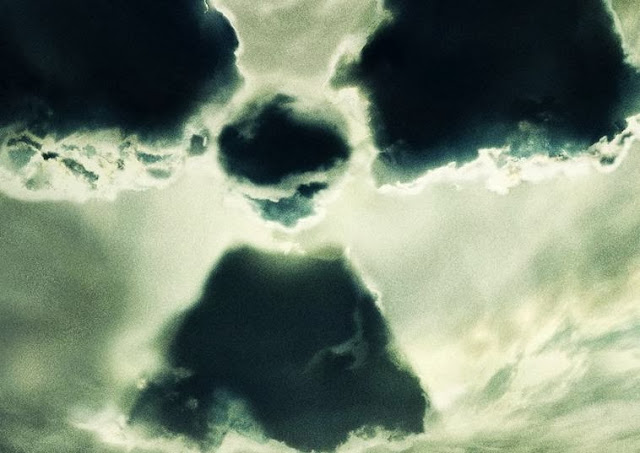 Most humanoid mutant movies can be graded on a scale from one to 'C.H.U.D.'.  'C.H.U.D.', of course, being the high end of the spectrum.  It's not that that film is somehow a perfect ten, but I'm hard pressed to think of a better mutated-human-gone-cannibal film.  Knowing full well what this film is up against, I mercilessly put it in front of Starkwell and Lovelock, as they prepare to dissect and annihilate.

[Montage of young adults on a Euro Trip.]

Lovelock: This movie needs to either change gears FAST, or take it up a notch and start including some boobs in this montage.

Older brother Paul decides to take the rest of the group (made up of younger brother Chris, Chris' girlfriend Natalie, and some chick named Amanda), on an EXTREME TOURISM TOUR of the abandoned city next to Chernobyl.  Obviously, it's not going to end well.  Chris is apprehensive, but immediately gives in and they take off immediately with tour guide Uri and two random people who joined the tour.  The "official" way into the town has turned their excursion away (armed guards and whatnot), so Uri takes them in the back way.

Lovelock: The back way into an abandoned radioactive city… probably NEVER is the right way in.

[The gang tours the ghost town.  They see a mutant fish and have a run in with a bear.]

Starkwell: Filming there must have been pretty interesting.

Lovelock: I guess.  What if someone needs to go to the bathroom?

Starkwell: Is that all you think about?

The movie doesn't waste much time.  They get back to the van only to find that the engine has been tampered with, so they're stranded.  They hear what sounds like crying babies, and Uri decides to venture outside with a gun.

[Chris joins Uri outside the van.]

Lovelock: Wait, suddenly, mister "this is a bad idea guys" is just going to head out into the dark woods with an ex-military dude in a ghost town?   Now he's all mister "be right back hand me that gun"?

Starkwell: You don't take ANY tours.

Lovelock:  Because tour guides always tend to shush me when I try to make jokes about what they're saying.

Then it gets more intense as they drag Chris back into the van and his leg is all fucking chewed up, and apparently 'they' got Uri.  I assume he means the dogs.  The battery in the van dies, so they sit in a dark van, trying to help Chris' disgusting leg.  As they all sit around breathing heavily I heard at least three or four nervous farts from Lovelock (who blamed them all on the squeaky couch).  Morning comes and half the group tries to go out and find Uri, while Chris and two of the girls stay behind.

Lovelock: So much for captain adventure.  Nice leg, asshole.

[Ex-Tween Sensation, Jesse McCartney, plays Chris... the reference was very out of character for Starkwell.]

[They follow Uri's blood trail down into an underground something and find dead Uri.]

Lovelock: Maybe this is all part of his special "extreme" package…

Starkwell: I'd be asking for a refund.

[Chris and Natalie stay behind in the van, the rest go to get help and promise to come back.]

Lovelock: They don't have any water or food… and it's already been over a day.

So far other than "hearing" a CHUD, we've mostly just seen dogs chasing them, and one of the dudes got munched by a mutant fishy.  After a 'found footage' moment of Natalie's phone, showing, I assume, the CHUDs taking Chris and Natalie.  The acting is decent overall, although there have been a few cuts of the actors smiling when the characters really would not be and should not be.

Lovelock: I need to see more than just a fucking FLASH of the CHUDs.  SHOW ME THE CHUDS!

[We see a child CHUD and the shadow of a CHUD and then Natalie is ONCE AGAIN, taken and dragged away… again, I assume by a CHUD, but we haven't really seen them yet.]

Starkwell: You're not one for tension building.  I bet during Jaws, you were all "hey show more shark".

These people tend to abandon one another quite quickly.  I'm not sure if that makes it more or less realistic than most films like this.  We get a bit more of a glimpse of the CHUDs and Starkwell and Lovelock get into a debate as to whether or not they remind them more of Sloth from "Goonies" or the Toxic Avenger.  They eventually settled on "they look like Sloth and Toxie's butt baby".

Starkwell: I feel like the acting is getting worse.

Lovelock: They were better when they were just playing "vacationing idiots".  Now that they have to ACT, scared, hurt, confused and whatnot, they are NOSEDIVING.

Eventaully Amanda is the only survivor, but the crazies that "rescue" her bring her to their lab, and you find out that this is all some kind of experiment.  She is then fed to the CHUDs.  A little low on the actual CHUD content, but otherwise a fun little number.