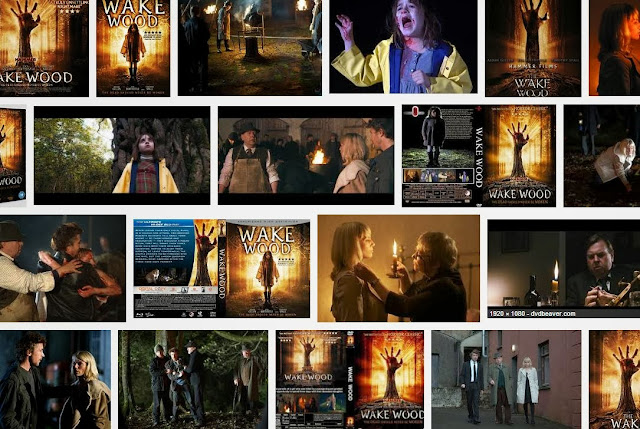 This is apparently the story of some kid dying by vicious dog attack and being re-animated by their parents thanks to, like, witchcraft or something… apparently they never saw “Pet Sematary” and thought it would all just work out.  Since this is a horror movie, I can assume that they were wrong.  Lucky for Starrkwell and Lovelock.

Lovelock: I don’t think this movie is going to be a hilarious romp in the woods.

Starkwell: Why would you have thought it would be a 'hilarious romp'?

Lovelock: The law of averages?

Starkwell: That doesn’t apply when every movie you watch is about some sort of zombie.

So the couple has moved somewhere new, obviously in an attempt to move on.  I don’t think it is working.   It’s all pretty intense. After their car breaks down, they wander into the woods and stumble upon their friend’s house.

[Wife goes ‘round back, stumbles upon a pagan ceremony, involving a dead animal and blood being poured all over someone.]

It’s a strange town that they have moved to.  It seems like everyone is in on the whole “let’s bring our loved ones back from the dead for three days”.  The wife, Louise, figures it out, and decides she wants to bring back her Alice for three days.  She convinces the husband, Patrick. Now, Witchdoctor Dude tells them that he can only do it if she has been less than a year.  They decide to lie (I assume it has been more than a year).

[They lie to Witchdoctor, it has DEFINITELY been longer than a year.]

Lovelock: To be fair, Witchdoctor didn’t warn them what would happen if it’s been longer than one year.

It’s taking a while to get going.

[They dig up their daughter to get some piece of her.]

Lovelock: At some point, ONE OF THEM must start thinking, "are we sure about this?"

[LITERALLY a piece of her... the dude cuts off a finger with some scissors.]

Lovelock: He’s really going for it.  But again... "are we sure about this?"

The ritual is pretty gross.  They crush some dude’s dead body, and dissect him, smash his face, shove a dead girl’s finger down his throat, burn him, crack open the burnt flesh cocoon… etc.  It’s a pretty long affair.  We’re half way through the film, and only just now has the girl come back to life.

Lovelock:  They’re not leaving her much time to kill everybody.  Come on, movie…. Let’s get this show on the road.

[Patrick and Louis play with Alice, laugh and giggle.]

While driving, Patrick takes his eyes off the road and runs over a dog.  He takes him home and stitches him up.

[They plan on keeping the dog, naming him Howie.]

Lovelock: I was being sarcastic.  I’m SOOOO bored.

Lovelock: They need to develop some fucking action.  Maybe the dog could like, go all Cujo or something.

[Patrick and Louise put Alice to bed, and then go and hump.]

Lovelock: Because nothing sets the mood like fiery pagan rituals, dissecting dead dudes, bloody rebirths and stitching up a half-dead dog.  Oh also, putting your zombie daughter to bed.

Alice starts acting funny, Lovelock’s looking pretty STOKED.  Or confused… I can’t tell.  The woman whose husband’s body they used to bring Alice back is hanging out with Alice and figures out that something is UP.

[Patrick and Louise decide to “take their chances” and leave Wake Wood.]

Lovelock: Let me get this straight, they’ve already lied about it being less than a year, now they’re leaving the city limits?

Starkwell: These people are dumb.

Lovelock: Witchdoctor BROUGHT YOUR DAUGHTER BACK TO LIFE.  Don’t you think maybe you should listen to him and his rules?

Starkwell: I hate these people.

Lovelock: I hope Alice eats them.

[The townsfolk come to see them and tell them if they send her back now, all is not lost.  They refuse.]

Lovelock: THEY ARE GIVING YOU AN OUT.  Take it!  These people, man.

Lovelock is angry about the people being so dumb, but I think his temper is just so short, because we’ve got less than half an hour left, and Alice still hasn’t offed anyone.  Also, why would Patrick go to work during one of his three days with his daughter?

[Too little too late?  Lovelock doesn’t generally have the patience for films that try and slowly build tension.]

So yeah, Louise lures her daughter outside the city limits and she dies.  And the townsfolk bury her.  But… TWIST, Alice reaches up out of the ground and takes Louise to… Hell, I assume.

[Patrick uses a hair off of a brush to bring Louise back.]

[TWIST, she’s nine months pregnant and Patrick wants to C-Section the baby out.]

Starkwell: So the afterlife is just... another physical place where you continue to live and develop your baby?

And then, in a final kick to our collective crotch, Patrick looks at the camera, breaking the fourth wall.  That’s seven twists too many, after ninety minutes of dreadful inaction.
Documented by Kev D. and Posted at 08:04