The Legend of Bloody Jack. 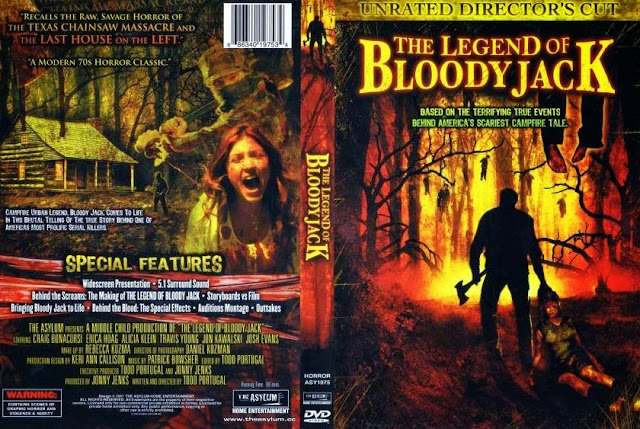 Seemingly known for his editing work on Dr. Phil and Oprah, as well as his directorial entries in the "THUMB" series of film parodies, this… aw fuck it.  This movie is probably going to suck.  Plus it was produced by "The Asylum".  Have fun, dudes.

[Descendent of “Bloody Jack” reads from some book and brings him back to life.  Bloody Jack kills this descendent dude.]

Lovelock: And that’s why I don’t resurrect my serial killer ancestors.

Starkwell: Yeah that’s why.  Wait.  What?

[Immediate sex scene with the worst music ever.]

Lovelock: Also, he wants to have boobs in his movie I guess.

Starkwell couldn’t do it.  He just left during the HORRIBLE existential conversation about whatever. Shit’s lame.  I don’t remember exactly which 'existential' conversation he left during.  It felt like there were four hundred million of them.

Lovelock: Why do young adults in these movies just sit around making out in front of each other?  Are there really people like that?

At least it didn’t take much longer for it to get going, and Bloody Jack starts killing people.  On a side note, there seems to be a huge age gap between the young adults.  Seriously, one of the girls looks forty.  So far the movie has been mostly bad dialogue, boobs and HORRIBLE FUCKING MUSIC.

[Bloody Jack spies on couple doing it.  Doesn’t do any killing.]

[The next scene includes… wait for it… more sexy talk.]

Lovelock fell asleep. I was making applesauce, so I didn’t bother waking him up.  I think there was a scene where Bloody Jack chopped off a dude’s wang.  Also, it cuts from day to night, back to day, immediately back to night.  Then I realized, it’s actually an attempt at “day for night” shots.  They are the worst “day for night” shots that I have ever seen.  What a dumb fucking movie.  Eventually it ends with the main guy shooting a fireball out of his hand and blowing up a car that Bloody Jack was in.  But then TWIST, the whole thing was just a story being told by one of the guys as they sit around drinking.  But then TWIST again, Bloody Jack shows up and kills them all.  So the whole movie was just one guy's storytelling, and then what really happened took about two minutes.  Well at least no one survived.