Night of the Living Dead. 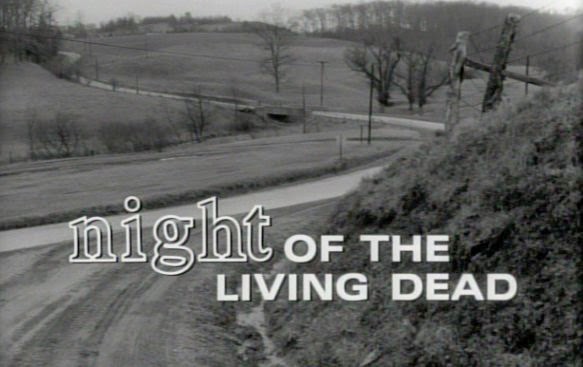 The Internet Movie Database describes this film as “a group of people hide from bloodthirsty zombies in a farmhouse”.  Seems like a fairly simple premise, and it is.  The film never actually calls them zombies.  They're ghouls, or something... Either way, this simple idea picked up steam, and has become the gold standard for zombie films.  It re-defined a genre, so much so, that “purists” will dismiss more traditional zombie films as “not a real zombie movie” even when they pre-date Romero’s classic.  Anyways, nothing can be said about the film that hasn’t already been said, so let’s just let Starkwell and Lovelock enjoy it, and say goofy meaningless shit.  What a perfect film to be the three hundredth film to make its way to Zombie Hall.

[Nerdlinger John complains about visiting his father’s grave on behalf of his old mom.]

Starkwell: So, John’s a huge dick?

[John continues to complain.  He sees a dude wandering aimlessly around the graveyard.]

Lovelock: Welcome to the party.

[John tells a story about how he used to scare her as a kid, and then, he delivers the famous, “they’re coming to get you Barbra”.]

Starkwell: Even as a kid he was a dick?

Lovelock: Once a dick always a dick.

Lovelock: Immediately giving us what we want!

Barbra makes her getaway and Lovelock and Starkwell CHEER HER ON.  She finds the farmhouse and begins to explore the inside as she hides from Zombie Hinzman.  The phone? Dead.  The music? Stressful.  The Atmosphere?  Perfect.  The zombies? Multiplying.

[Ben takes down some zombies with a tire iron.]

Starkwell: Although, he’s awfully sweaty.  Maybe he should think about taking off that sweet cardigan.

Lovelock: You take that back!

How could Romero get it so right on the first try?  The zombies are fucking perfect.  There’s a touch of “Last Man on Earth” with a sprinkle of “Plague of the Zombies”, but seriously, there was nothing else quite like it at the time (from what I read anyways).

Lovelock: Is it just me, or is Barbra kind of phoning it in?  LIFT UP A FUCKING HAMMER.

Lovelock: WHAT A FUCKING BABY.  Multi-tasking man extraordinaire, A.K.A. Ben, is telling stories, boarding up the house and rocking a cardigan.

Barbra starts telling her story about John and FREAKS OUT, Ben is all “bitch calm down” basically.  Eventually he punches her in the face and Lovelock played air guitar.

Lovelock: I hope the reporter says it may be due to “wacky tabacky”.

The zombies seem to hate fire and are afraid of flames, which sparked a conversation between Lovelock and Starkwell as to why so-called zombie “purists” always get hung up on the “running versus walking” issue, but never mention the whole “fear of flames” thing… Further proof that people should just shut up and open their minds.

[News report mentions that victims of the ‘murderers’ have been partially devoured.]

Lovelock: There it is.  The invention of a genre.

Starkwell: People must have been freaking out.

Lovelock: I wish I could go back in time and have not seen all of the post-Romero films and see this movie with a clear head and totally shit my pants forever.

[Don’t we all…  Well except for the pants shitting.]

[Ben figures out that you have to shoot them in the head.]

Starkwell: But again, people hold on to that one, but not the flames thing?  Strange.

Barbra and Ben meet Harry and Tom.  Harry decides that he wants to stay down in the cellar, Tom wants to stay upstairs.  They also meet up with Judy, Helen and Tom’s sick daughter, but, basically none of their opinions, nor Barbra’s really matters. They just do as their husbands say, essentially.

Lovelock: So the ladies are basically useless?

Starkwell: Seriously, Tom isn’t even counting them as people… “The three of us”…

Lovelock: You skirts ain’t worth a damn in a crisis.

Starkwell: They certainly aren’t helping their cause by sitting around not doing anything.

Judy ends up downstairs with Helen and Harry’s sick kid, while the rest sit around upstairs arguing about this and that.  Harry is easily the biggest piece of shit in the Universe.  Harry’s wife Helen finally speaks up, at least, and shits on her husband, but just as she is asking if she can do anything to help, Ben and Harry totally speak over her, interrupt her and have their own conversation, fully ignoring her and continuing to make all ladies feel and be useless.

[News report informs them that the killers are UNDEAD!]

Lovelock: I’m so happy.  I feel like I’m watching how life was created.

After the long news report explaining to us, the viewers, just what in the Hell is going on, Ben hatches a plan to get out of the house and take the truck to get to a rescue station.

[Tom convinces Judy that leaving is the right thing to do.]

[Tom tells Judy that she is of no use at all.]

Starkwell: Wait what?  Is that really what he said? Harsh.

[It seems that the ladies are just there to look pretty and smile.]

[Tom and Judy go get the truck, truck catches fire, Judy’s jacket gets caught, Tom tries to help her, truck blows up, they blow up.]

Starkwell: Of course, it's her fault.

Lovelock: That's why you just can't trust women with anything... apparently...

Starkwell: Wasn’t this when feminism or women's lib or whatever was getting started and going strong and whatnot?

Lovelock: Well, technically, she did burn her bra.

Ben runs back to the house, Harry does little to help him out, so Ben, obviously, beats the shit out of him.  Lovelock and Starkwell celebrate with a high five.  Then we see some serious flesh eating and it’s honestly still pretty fucked up and shocking.  They celebrated again, but this time with a series of roundhouse kicks.

[The kid becomes zombie, since she was infected by THE BITE.]

Lovelock: So this really did start it all…

Starkwell: But, again, why does no one care about the flamophobia angle?

Starkwell: But don’t worry about the fire thing?  No one will remember that one?  WHAT THE FUCK?

Hell starts breaking loose.  Ben shoots Harry with his gun and Harry ends up in the cellar with his daughter who promptly starts eating him.  Then she kills her mom with a shovel.  And eats her.  Starkwell and Lovelock are sitting on the absolute edge of their seats.  No sounds coming from them, except the occasional nervous fart from Lovelock.  Barbra finally wakes the fuck up and starts helping, but it is WAY too little too late, as she immediately encounters her zombie brother Johnny who grabs her and, I assume, rips her apart and eats her with all of his ghoul friends.

[Ben goes down to the cellar and ices zombie Harry and Helen.  But then he is SWARMED…  And yet he MAKES IT!]

Lovelock: He’s still pretty calm and collected, but I can’t help but wish he’d put his cardigan back on.

Morning eventually comes, and a bunch of local militia, redneck weekend warriors and National Guard seem to have things under control.  They come upon the farmhouse and as Ben slowly exits to signal that he is still alive, they, rather casually, exterminate him with a shot right between the eyes.  Just another one for the fire.  Seriously, this film deserves all of the praise that it gets.  Nearly fifty years old, and it can still shock, surprise and delight.

Lovelock: If he'd been wearing his cardigan, I bet they wouldn't have shot him.
Documented by Kev D. and Posted at 09:08