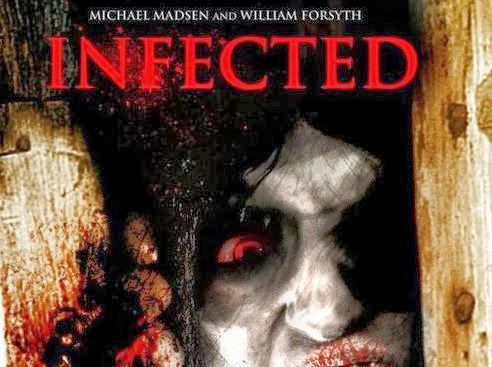 You got to hand it to people that don’t bother to find a name for their film that hasn’t already been used.  Hand them a trophy for laziness.  "Infected" might be the most generic name ever.  Anyway, this one somehow has Michael Madsen in it, and looks terrible.  It starts fairly quickly, with a narrator talking about how the Earth has gone to shit, and then cuts to Michael Madsen and some other people hauled up in a cabin in the woods, fighting off zombies.

[The sound mixing is hard to sit with.]

Starkwell: It sounds like the sound was recorded on an old tape recorder and then played back through a phone.

Anyways, then it says “TWO HOURS EARLIER”, so now I suppose we are going to be treated with the boring story of how they got to that point.  Sometimes a good actor like Madsen can lend credibility to a shitty film, but instead, he just helps everyone else look EVEN WORSE.  Madsen isn’t the only recognizable character actor in here.  William Forsythe is in this one too and is wearing a terrible wig.  Thinking about how much money this thing might have cost to make, is just depressing.  It doesn’t LOOK cheap, it just FEELS fucking cheap.

Lovelock: This is painful.

Two characters that we haven’t seen before are out in the woods… one’s a nerd, the other a… prostitute?  And they… hump in the woods?

Starkwell: Why do these movies always think they need to shows boobies?

Lovelock: Some people will overlook a lot when there are boobies.

The conversation went on about boobies for a while and then they both got up and left.  Watching it in fast forward, it seems like the zombies show up around the thirty minute mark, and by the hour mark, we are back to where we were before it said “TWO HOURS EARLIER”.  Anyways, it ends on a downer.  Hooray!  It’s certainly not the worst, but still SO FAR AWAY from being any good.  There’s a whole end part with black and white zombies and the dudes building a vehicle and like weapons and shit, and it’s all just so fucking played.  Runtime ninety minutes, feels like infinity.
Documented by Kev D. and Posted at 08:28