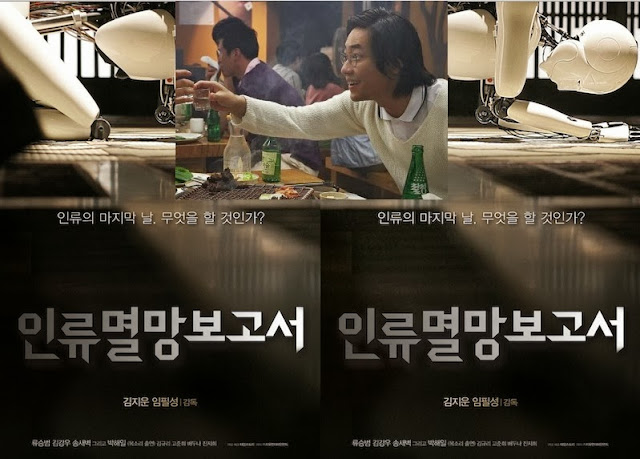 Well, it seems like found footage films are finally starting to go somewhat out of style, and that the new trend is going to lean towards anthology films.  This is not necessarily a bad thing, but we've yet to come across a recent anthology film that we didn't all FUCKING HATE.  Well, straight from Korea, comes this new anthology pick about the end of the world, basically, in different ways of ending.  Lovelock is, as always, upset about having to read subtitles.  The first is a story called "Brave New World".

[Nerdy guy complains to his family and then his mom tells him to take out the recycling.]

Starkwell: This dude is INSTANTLY loveable.

Lovelock: And that's why, I don't recycle.

Lovelock: His reaction to smelly and moldy trash is SPOT ON.  I can relate.

After gagging a boatload of times, eventually the nerd finishes his chore and dumps a mysteriously moldy apple into the "food waste" disposal bin.  We follow the Apple's journey through the composting process, into cow feed, that cow is killed, butchered, made into a meal, and probably has horrifying mad cow disease.  It's like an episode of "The Polka Dot Door" on acid.

[Nerd Guy is on a date with a girl at a Korean BBQ place, eating BEEF.]

Lovelock: Do you think they call it Korean BBQ in Korea?  Or is it just BBQ?  Or like, REGULAR RESTAURANT?

[Nerd Guy gets in a fight with two teens… but suddenly sees all red and KICKS THEIR ASSES.]

Lovelock: If that's what being a zombie is in this scenario, SIGN ME UP!

Starkwell: From zero to hero.

[The dudes that Nerd beat the shit out of seem to be regular zombies and attack a young couple in the park.]

Lovelock: Hmm… maybe I want to take back what I said.

It seems that those infected initially become very angry and violent, like something out of "The Crazies", but then they eventually go full zombie.  I believe it was Lovelock who yelled out "MULTIZOMBI!!!!!"

[We see news footage, as several programs explain the outbreak of the violent "flu".]

Starkwell: This is so fucking cool, it's not even funny.

[Everybody will be dancing and we're doing it right.]

The comedy works.  Several ROFLs could be seen and heard from the crowd.  Nerd guy's family comes back from their vacation and finds their place wrecked and their son/brother infected.  He them promptly starts eating his mom and dad.

Lovelock: This movie, makes me happy.  How did they manage, in a short segment, to do more with zombies than most films can in a full running time?

Starkwell: Writing, acting, directing, character development, having a point and an actual story… should I go on?

The segment ends on a poetic note, quoting the Bible and eating from the tree of life.  I'm not sure if they're saying we should all be vegetarians, or if it makes perfect sense, or if they're saying recycling is bad, but I think it's awesome.  Starkwell IS a vegan, Lovelock's favorite food is pepperoni so… split decision in that sense.   But for the segment overall, it's unanimous… FANTASTIC.  They still watch the other to "non-zombie" doomsday scenario segments, but their conversation keeps to a minimum.  The second segment involves a robot takeover, whereas the third sees the end of the world due to a meteor strike.  All three are solid, but the zombie segment is clearly the critics' choice here.   American anthology films TAKE NOTE.  Please.
Documented by Kev D. and Posted at 08:46