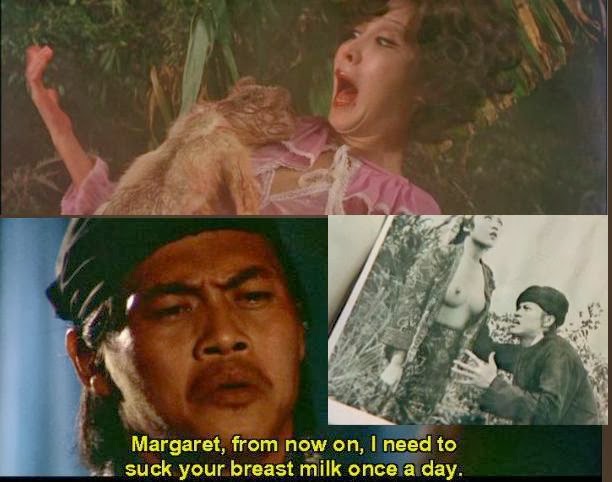 Look, this movie has Lo Lieh in it, and zombies.  Need I say more?  After the obvious "but I didn't see the first one, won't I be lost?" joke, Starkwell and Lovelock sit, ready.  Let’s do this.

[Girls, doing laundry in a river, strip down and go swimming naked.]

Lovelock: We have a new contender for the "soonest boobies" award.

[Insanely fake crocodile eats one of the girls, slowly swims away and has rocks thrown at it by the villagers.]

Lovelock: There are, no words.

[Old Witchdoctor uses a grappling hook, a live chicken and a chant to catch the crocodile, then he cuts his stomach open and retrieves the girl’s bracelet.]

Lovelock: These could be the ending credits and it would already have been more fun than a lot of movies.

[Seriously the music is amazing.  They have a scene at a club and the drums were CLEARLY sampled once by the Beastie Boys.]

Then Lo Lieh takes a girl into his dungeon, strips her down and pulls a nail out of her skull and she immediately ages seventy years and drops dead.  Maybe at some point, we’ll find out why.

[Cut to a hospital full of infected patients.]

Starkwell: Did the doctor say it was from Black Magic?

Lovelock: I don’t know, but that’s why I don’t go to hospitals.

[Upon Lovelock’s request, I changed the audio dub to the English version.  The Australian accents are welcome.]

Lo Lieh seems to be a witchdoctor of some kind.  He just hung a bloody dead animal outside some girl’s house and now is back in his basement doing Black Magic type stuff, pouring blood on what looks like a female figurine made out of old croissant dough.

[The doctors read about Black Magic, and read about how drinking breast milk keeps a man young?]

Using his Black Magic, Lo Lieh summons the girl from the neighboring mansion (one of the doctors' wives) to his basement.  He explains to her that he requires breast milk.

[Apparently she needs to eat some special oil made from her hair and she’ll produce breast milk.]

Starkwell: Why doesn’t he just cast his zombie spell on pregnant women?

Lovelock: Where’s the skill in that?

Starkwell: I didn’t realize he was being scored on creativity.

[Turns out the hair he needs is pubes, and so Lo Lieh shaves off her bush.]

[After making an oil from her pubes and feeding it to her, there is a drawn out sex scene in the bedroom, featuring more suckling then anyone is really comfortable seeing.]

Lovelock: What. The. Fuck.

The only thing keeping them both here at this point is the promise at how potentially wacky this might get.  But they can’t help but notice we have seen far more nipples than zombies OR kung-fu.  This movie is very quickly pissing all of its potential out the window.

[The girl wakes up pregnant, with some sort of monster baby, and the doctors immediately operate and take it out.]

Starkwell: That might be the most horrifying thing I’ve ever seen.

Lovelock: And you once went into the bathroom after I forgot to flush after a huge dump after eating lots of Tex-Mex... so that's saying a lot.

Lovelock: Will there be a hero in this movie or… ?

Lovelock: I ain’t buying that shit for a second.

Honestly, so far the movie is much more about perverts, rapists and breast milk than it is zombies, black magic or kung-fu.  The doctors have started investigating.  They go to the graveyard to dig up a body they believe was victim of BLACK MAGIC.

[They perform an autopsy on the body and expose a bunch of worms and maggots.]

Lovelock: Did he once again say “it must be Black Magic”?

[The two doctors agree to use one of their wives as bait.]

Lovelock: It was her idea… she’s asking for it.

[The spell works and Doctor One takes Doctor Two’s wife to a hotel room and fondles her.]

Starkwell: Careful what you wish for.

[Cut immediately to Lo Lieh sucking a tit, which then starts smoking, melting, and oozing pus.]

Lovelock: I know that I didn’t wish for that.

It’s hard to keep up, shit’s moving so fast.  But at the same time, nothing is happening.  Lo Lieh stays young by sucking breast milk, impregnating women with demon babies, and eventually melting them dead.  Then, as Doctor Two fights with his possessed wife, a random old man dressed in white, who we ave not yet seen up until this point (or maybe that was the guy who performed the stomach surgery on the crocodile), beats her with a dead cat, throws it on her and then cuts open her back and lets out a bunch of green worms.

[Old White Wizard has a psychic battle with Lo Lieh.  From miles (?) away.]

Starkwell: Did Lo Lieh just put a nail through his own cheek?

[Before dying, White Wizard ripped out his own eyes, gave them to Doctor Two and told him he must eat the eyes, in order to have wise eyes.]

Lovelock: I’d cook them first.  Maybe in like a white wine sauce… he was the White Wizard, after all.

Anyways, nothing could prepare Starkwell or Lovelock for BLUE SCREEN Cable Car Fight between Doctor Two and Lo Lieh.  Describing it would never do it justice, so I won’t even try.  But let me just say, it was magical.  Black magical, if you will.

[Zombie Doctor One and his Zombie wife attack Doctor Two.  He pulls the nails out of their heads and melts them.]

Lovelock: Well, so much for saving them.

[Three zombies in robes break into Doctor Two’s wife’s room, grab her by her ankles, spread her legs straight open and begin to feast (?) on her crotch (?) .  Lo Lieh watches.]

Then Doctor Two starts throwing voodoo dolls into a fire, and we are treated to a bunch of flaming zombies falling down stairs and off of balconies and whatnot.  And then, in like a minute, Doctor Two burns down Lo Lieh’s house, his wife cuts Lo Lieh’s arm off, Lo Lieh melts at the sight of some magic amulet that the doctor had and the movie ends.  Good luck forgetting that one.
Documented by Kev D. and Posted at 08:41