War of the Dead. 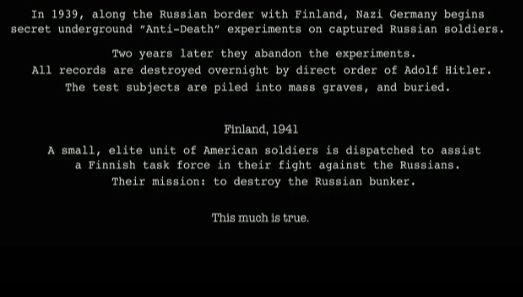 It’s hard to imagine that Nazi Zombie Movies is an actual thing, but it is.  This is the most recent one that I know of, along with the “Outpost” sequel.  This one looks to be more an homage to the Nazi Zombie films of the late nineteen seventies and early eighties, than a nod to pure excess (“Dead Snow”) or a flat out tale of pure horror (the “Outpost” movies)… But still, it appears to be sort of doing its own thing, in that this one actually takes PLACE during the war, as opposed to being about a group of unlucky souls unearthing ancient undead Nazis.  I, for one, am excited to see what happens.

[Captured soldier is tortured by the Nazis with some sort of experimental injection of black tar shit.]

Starkwell: Ok… you had me at hello.

Lovelock: You had me at hello indeed.

Americans and Finnish soldiers wander through the forest in search of an old Soviet bunker that they want to destroy.

Starkwell: The flashes of black and white are cheesy, and totally unnecessary.

A chunk of the Finnish and American dudes survive, but then they meet up with ZOMBIES!  I guess if you want to play semantics, technically the zombies are not Nazis, they are undead RUSSIANs that are helping the Nazis by eating people and not dying.  They are the Nazi’s zombies, not Nazi zombies.  But seriously?  Same fucking thing.

[They try and hide in a cabin, but the “28 Days Later” style zombies swarm the cabin and bite the shit out of a bunch of the dudes.]

Lovelock: Not shy on the death count.

Starkwell: Yeah, they’re not fucking around.  Since they aren’t making much of a point to develop any characters, we can assume that at any time, anyone can go.

Lovelock: Sounds good to me.

Starkwell: The main character is ‘war’ I guess.

Solid action so far and an awful lot of fun to watch.  Starkwell and Lovelock can often be saying things like “woah” and “boom” or “there it is” or “shovel-kill!!!!!”.  Yes, there was a shovel kill.

Starkwell: So, what exactly is their mission?

Lovelock: Entertaining the audience, I assume.

Eventually the soldiers find the lab where the anti-death research was being done.  Very creepy.  The film moves fast, and, while light on character, still manages to make you root for the good guy soldiers.  I guess the easiest way to make people root for characters is to have them fighting Nazis.  It definitely helped Indiana Jones be even more awesome.

[Guy has to kill his wife.]

The rest of the movie played out and there wasn’t much that Lovelock or Starkwell said that was worth documenting.  I think at the end one of them, or both of them actually, said “what a blast”.  But I don’t if they were only saying that because of all of the explosions or because they really had fun.  It ends on a cliffhanger that actually made them both laugh, but mostly because the movie’s final line of dialogue was cheesy as balls.  Do I smell a sequel?  Probably not ever going to happen.
Documented by Kev D. and Posted at 15:49