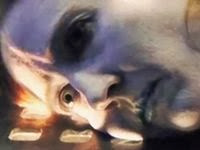 A fairly low budget, straight-to-video film attempting a sci-fi story involving space undead, is not likely to deliver on everything that it promises.  The fact that I couldn’t find positive reviews doesn’t help the promise all that much.  Not to mention that director Andrew Bellware seems to have spent the bulk of his career, thus far, directing horrible mockbusters.  “Total Retribution” instead of “Recall”?  Not to mention his follow-up “Prometheus Trap”.  Holy cow.  How many people fall for that shit?  And so, without any further ado, Starkwell and Lovelock are stuck watching this mutha’.

[Woman floats through the sky?  Wakes up in a desert.]

Starkwell: Might be the worst green screens I’ve ever seen.

Lovelock: Waking up naked and confused?  Only Milla Jovovich can pull that shit off.

Starkwell: The bad effects have just been taken up a notch.

Lovelock: And what’s with the young British girl voice for the computer?  That’s another "Resident Evil" Rip-Off!

Starkwell: Yeah, if you’re ripping shit off from THOSE movies, you’re already in a heap of trouble.

[Naked girl runs into a survivor asking her to “KILL ME! PLEASE!”]

So now we cut to some lame “squad” consisting of two people going around making sure everyone’s head is blown.  The acting is bad, the dialogue worse, the story atrocious, and the special effects are well… as bad as the fight choreography.  At this point, Starkwell and Lovelock just want the creepy redhead to put some fucking clothes on.

[Naked Redhead is… a robot?]

Lovelock: So what?  “Blade Runner” now?

Then a character in the movie was talking about the pain he is feeling as the virus takes over his body and says “I just wish it would end soon!”  At the exact same time, without skipping a beat, both Lovelock and Starkwell said “I know what you mean.”  Not a good sign at only fifteen minutes into a ninety-ish minute turd.

Sometime after the redhead finally put some clothes on, which, from what I can tell, consisted of bicycle shorts, a tube top, and some knee pads, Starkwell and Lovelock both left, unable to deal with this piece of mega-shit.  Eventually half-naked redhead gets herself a duster and they bring it full circle with the “Matrix”.  Also there is time travel I think.  Oh man, this was a bad one.
Documented by Kev D. and Posted at 11:25