The Night of the Sorcerers. 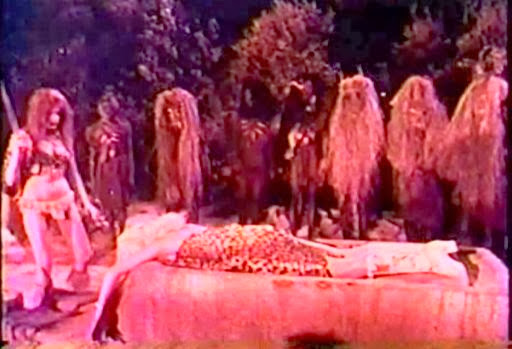 I’m not gonna lie, I’ve been looking forward to this one for a while.  I’ve wanted to see this bizarre Ossorio pic, but more importantly, I’ve been SERIOUSLY excited to watch Starkwell and Lovelock watch it.  His “Blind Dead” films were definitely a mixed bag, so this really could go in any direction, and will likely go in all directions at once.  Voodoo zombies beheading women, who, in turn, come back as some form of bloodsucking undead peoples?  SIGN US UP.

[Film starts immediately with some kind of tribal dance ceremony.]

Starkwell: I don’t think I’ve ever seen a film look quite this bad.

Lovelock: It’s grainy AND has a purple tint.

Starkwell: Also, how fucking long is this dance scene going to last?

[Tribe takes out a euro woman prisoner, and start whipping her.]

Starkwell: Obviously they whip her shirt right off.

Lovelock: Well, it is an Ossorio film, so I’m assuming they may cut her bare breasts with a sword pretty soon.

[They take the bare-chested prisoner and lay her out on a rock and eventually, the naked ladies of the tribe chop her head off and rub blood all over themselves.]

The ceremony was rudely interrupted by a bunch of white dudes who look like they are out hunting lions.  They shoot a bunch of the natives.  Then it cuts to the present day (I didn’t realize it wasn’t the present day before) and a bunch of euro researchers show up near the village and start setting up camp.  They’re trying to find out what is happening to all of the elephants... I think.

Starkwell: So… two dudes and what look to be underwear models are researchers camping out in ?

Lovelock: You wouldn’t understand.  The elephants are disappearing, and they needed to send their best team.

Apparently the natives are only dangerous when there is a full moon.  There seems to be a mixing of werewolf, vampire and zombie folklore... Then randomly some local creepy dude walks up and says he “heard of their arrival”.  I’m not sure where he came from, or how he ‘heard’ about them coming, especially since there doesn’t seem to be ANYTHING around them.

Starkwell: Wait, why is she walking around with her shirt off?

Lovelock: Clearly so that they can hump near the… lake?

[Voodoo Zombie rises out of his rock grave.]

Lovelock: It must have sucked for that stunt man to be covered in all those rocks.

[Stupid girl wanders off on her own to… take pictures of stuff… in the middle of the night.]

Then there’s basically a repeat of the initial scene from the beginning, except without the dancing, the natives are zombies now, and the one doing the whipping is the undead girl who was BEING whipped the beginning.

Lovelock: Recipe for spreading the zombie love: Step one, whip her until her boobs pop out, step two, chop off her head, step three, dance and rub blood on face and breasts.

Starkwell: Or, recipe for a movie that sucks.

Lovelock: Also, is that cheap leopard print shit they are wearing supposed to be actual cheetah fur?

Then at one point it cut to a pair of really fake cheetah heads watching them through the bushes.  But, the PIECE DE RESISTANCE was when the original undead girl and the newly undeaded girl from the night before frolic in the woods together in leopard print loin cloths.  IN SLOW MOTION.  Whispering to each other telepathically.  This was what sent Lovelock and Starkwell to the floor laughing.

Starkwell: Why drown a guy when you have those sweet teeth?

[The girls grab one of the other girls from the camp and return to the woods.  Whispering.  In slow motion.]

Nothing has really happened yet, and from what Starkwell and Lovelock can gather, this film exists mostly as an excuse for Ossorio to film girls running around in bras and panties through the forest.  There is only one regular girl left at this point.  The other three are leopard print bikini wearing frolicking bloodsuckers.

[Some dude gets all rapey with the surviving girl.]

[Girl grabs a knife and stabs the aggressor.]

Starkwell: An incomplete rape and a clear lack of breast cutting?  This is certainly a departure for the Spanish director.

Then the dude who was killed in his dark room rises up as a zombie and goes after Survivor Girl, but she sets him on fire.  And it’s actually a pretty sweet stunt.  Lovelock did a full spin followed by eight or nine karate chops.  She wanders off into the woods and encounters her two friends, recently turned into bloodsuckers.

Lovelock: So are the zombies making them their bikinis?  Where is all the cheetah fur coming from exactly?

After that it gets more confusing.  I think Survivor Girl cut one of the bouncing bloodsucker’s throats… but then the zombies caught her… but then her boyfriend shows up and throws gun powder in the fire and rescues her… but then, as they drive away… SHE IS A BLOODSUCKER!!!!  And then it flashes “The End” and the DVD player immediately turns off.  Lovelock and Starkwell don’t know exactly what just happened, but they’re pretty sure they’d rather not see it again, maybe ever.

Starkwell: So… what happened to the elephants?

Lovelock: Yeah, if anything I’d think that the cheetahs would be the animal that was disappearing, given all the bikinis the zombies have been crafting.
Documented by Kev D. and Posted at 19:27