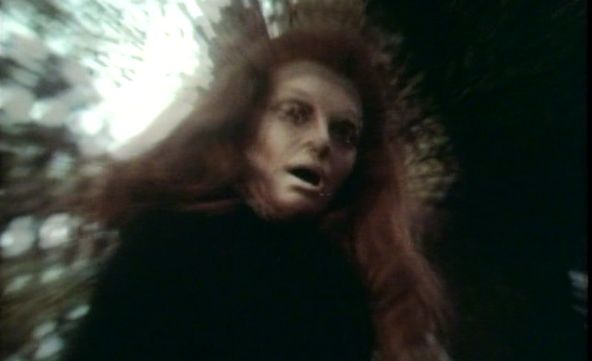 Also known as “Terror of the Living Dead”, the film involves a strange town, Satan worship, premonitions of the apocalypse, and most importantly PAUL NASCHY in a side role as a grave digger.  The fact that Troma’s name is attached to this one, even if it is only because they bought the rights to it and released it, leaves Starkwell and Lovelock worried.  Hopefully Naschy can carry the movie.  We’ll see.  Or actually, THEY’ll see.  I’ll just document.

Starkwell: Let me be the first to say that this looks and sounds like garbage.

Lovelock: Niiiiice print.  It looks like they filmed a projection of it on the wall. A dirty wall.

Starkwell: With one of those huge video cameras that records directly onto a VHS tape.

I’m not sure what’s going on, but some dude is hunting zombies in a cemetery…I think.  Or no, he’s going to his dead uncle’s castle.  I think he inherited the castle.  He has a bad ass mustache, a serious fucking hat and a real dreamy hair-do.  Anyways, he sees A HANGING WOMAN and flips the fuck out.  And then, because of how insane it looks, Starkwell and Lovelock also flip out.

[Then we see them perform an autopsy on the Hanging Woman?  They cut organs out of her.]

Lovelock: Damn, she was stacked.

So there’s this evil (?) girl named Nadia who calls out to Naschy asking him to “COME TO ME”.  After watching her undress herself and then put a bed sheet on over her naked body through a hole in the wall, Naschy walks into the room, takes said sheet off of her and begins fondling her.  But then he leaves SUDDENLY upset before going any further.  Then he goes to his secret lair (?) and kisses a bunch of naked dead women (?).  I think this is what is happening.

[Naschy is a grave robber.  So I guess he’s also a necrophiliac.  Robbing corpses to bang them.]

Lovelock: That’s why I want to be cremated.

Starkwell: Yeah, that’s why.  Dude, honestly, who’s digging you up for a good time?

Lovelock: I plan on looking good before I kick the bucket.

[Mustache Guy beats the shit out of the butler and then fires a gun at him.]

Lovelock: Wait… why did he do that?

Starkwell: I think he wanted to impress Nadia the Booby Girl… but I don’t really know.

[From now we will refer to Mustache Guy as Chuck Norris Guy.]

Lovelock: That’s not what I meant.

Lovelock just figured out that Nadia is the widow of Chuck Norris Guy’s uncle, which is kind of fucked up.  But I think the uncle left everything to Norris Guy, which explains why Nadia is trying to ride him so hard.

[Chuck Norris Guy makes Doris (the young daughter of the scientist) take off her clothes.]

Starkwell: Who is the hero in this?

Oh yeah, the frog re-animator scientist works at the castle.  And now Nadia is having a séance and is trying to talk to Hanging Woman.  But THEY GET MORE THAN THEY BARGAINED FOR.

Lovelock: Oh well, definitely no one left to root for.

Starkwell: I guess we'll just have to keep rooting for the END OF THE FILM.

Now the girl, Doris, that Rapey McMustache COMPLETELY DEGRADED by making her undress in front of him, is trying to cuddle Rapey McMustache.  Together they explore the castle and find secret passageways.  Lovelock said something about where “” got all of its ideas from, and Starkwell laughed for five minutes.

Starkwell: You got to hand it to the movie, the zombies look pretty sweet.

Lovelock: With ten minutes of film left though.  HOLY SHIT NOTHING HAS HAPPENED.

There was actually an interesting twist wherein it turns out that “NO. 37” was actually just “” upside down.  The scientist’s name is ‘’.  Trust me, you don't want me to explain anything any more than that.

And then Chuck Norris Guy chopped off Zombie Naschy’s head.  Oh yeah, did I mention Naschy was back AS A ZOMBIE.  This was, of course, accompanied by a Lovelock jump kick.  After they burn all the zombies and kill , the police and Chuck Norris send off to town.  But… LOOK OUT!  That’s a zombie driving that horse carriage!  The end.  IMMEDIATELY.
Documented by Kev D. and Posted at 11:17