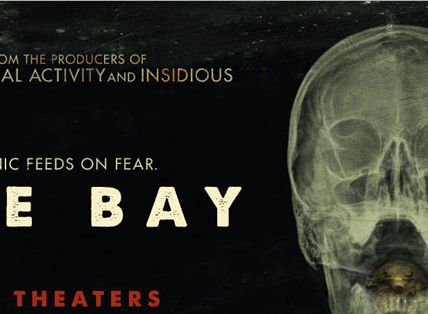 With zombies being all the rage, it’s only a matter of time before more “serious” directors start throwing their hat in the genre ring.  Much like with comic book movies, eventually the market will saturate, even with the big names in the mix, the mockbusters will cease, and we can get back to people making zombie movies for all the right reasons.  Until that day comes, we’ve got to keep hoping that some of the major zombie productions might hold up against the real classics.  “Wag the Dog” is one of Starkwell’s favorite movies, so let’s see how Levinson does in this setting, facing two of the genre’s toughest (not really) critics.

[Stock footage of dead aquatic creatures washing up on the bay shore.]

Starkwell: Wait, this is a found footage movie?

Lovelock: You just figured that out?  Real Rain Man, dude...

The story slowly starts off with a talking head shot of a girl explaining what happened that day in Anytown .  It was a festival of some kind, and she narrates as they show a bunch of cheap looking digital footage that people have submitted.  I’m assuming something bad will start happening soon.

[News footage of two scientists that were found dead in the bay, from “shark” bites.]

Starkwell: The production budget looks… well… are we sure this is THE Barry Levinson?

There was a whole conspiracy involving the mayor and his dumping of chicken shit into the bay.  The mayor seems sketchy.  There was a whole water treatment thing, that clearly isn’t gonna have worked as intended.  Lovelock said “better be zombies.”

Lovelock: That’s why I only drink bottled water.

The film is a bit schizophrenic in its approach to found footage.  It is a mix of talking head shots, random people’s home videos, doctor cameras video taping patients, COPS style ride along videos, iPhone FACETIME… a bit of everything.  It keeps t interesting, but Lovelock really wants more shit to happen.

Lovelock: What is this a flu epidemic?  Make with the zombies, yo.

Apparently someone was found dead with their guts torn out.  So Lovelock is even more at the edge of his seat waiting.  Starkwell likes the building of the tension.

[Weird creature crawls out of a fish mouth and bites a fisherman.]

[Lovelock threw up the muffin he was eating.]

Seriously though, there are a lot of fish gut shots.

[Two teenagers jump into the bay and get… eaten?  By… piranhas?]

All joking aside, this is moving pretty slow.

Lovelock: Yeah, we get it.  There’s bacteria in the water.  GO SOMEWHERE WITH IT.

Starkwell: I hate to agree with you but…

We are just past the halfway mark, and what we know is what we knew in the first five minutes.  The mayor/chickenfarmer has been dumping chicken poo and pee into the bay and the water is fucked.  What ISN’T CLEAR is if there is going to ever be anything more than puking people with blisters.

[Honestly, it does sometime look like something you could put beside shit like “V/H/S”.  Weird since Levinson IS an Oscar winner after all.]

Then we get to HEAR some pretty crazy shit through “ENHANCED AUDIO”.  It’s a neat and cheap way to have crazy shit go down without having to spend the effort to actually film it.  I believe it was Starkwell that shouted “LAZY”.

[They repeat a bunch of the footage from earlier.]

Starkwell: Really?  We’re THAT dumb that we don’t get it yet?  I need to have it read back to me like I’m some kind of child?

Lovelock: I’m still concerned that it’s not about zombie zombies.

Starkwell: Is that all that matters?

Anyways, the whole town dies, and then the government covers it up.  Zombie movie?  Not really.  Infected?  Kind of.  Any good?  Basically, no.
Documented by Kev D. and Posted at 12:57