Neither the Sea Nor the Sand. 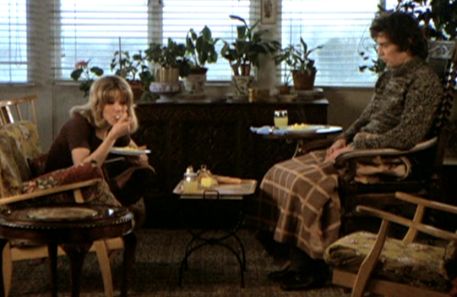 Also known as "The Exorcism of Hugh", "Neither the Sea Nor the Sand" has a nice DVD release from 'Redemption'.  This time around we seem to have been spared the random naked lesbian vampire sequence that usually starts up with one of that company's DVD releases.  Instead, we get the menu and music accompanying it that would not sound out of place on an early episode of "Sesame Street" in one of those sequences where we learn about bottle factories or something.  This further confuses Lovelock and Starkwell as to what the film will be about.  I'm also concerned about the nearly two hour running time.

Starkwell: What's this movie supposed to be about?

Lovelock: I know two things it isn't about.

Lovelock: Neither the sea nor the sand.

[Movie opens up with a girl on the beach.]

Lovelock: Wait a minute… sea and sand?  Talk about false advertising.  This should have been called "Lots of Sea and Sand, totally right off the bat".

So there's this girl, and she seems to be out gallivanting with a lighthouse keeper.  She's got a husband back home though.  I don't get it.  She's SUPPOSED to be heading back home, but decides to stay behind, I assume to bang the lighthouse keeper, a dude named Hugh.

[Hugh's older brother raised him.  They live together in the house.]

Starkwell: So the older brother cooks for them, starts them a fire, cleans up, and she bangs HUGH?

Lovelock: Well did you hear how grumpy the older brother was?  No thank you!

Lovelock: You're a married woman!

[In the morning, the older brother was all "SHE BETTER BE GONE WHEN I GET BACK."]

Lovelock: Is there gonna be a point to this, because we've just been watching a love affair for over half an hour?  No drama, no nothing.  Just two people being in love for half an hour?  Bullshit.

[Goofy music plays while they show a montage of the two being in love and escaping to Scotland!  Riding bikes!  Rolling around in a field! Crashing in the waves!  Doing sex!]

Lovelock: What the fuck position is that?

Starkwell: She seems to have enjoyed it.

[After the sex scene there was another goofy montage.  But this one ended with Hugh randomly dropping dead while running on the beach.]

Lovelock: It seems to rain a lot.  And what's with all the sea and sand?

Starkwell: Well, at least the honeymoon is over.

In the middle of the night, Anna goes wandering and stumbles upon undead (?) Hugh.  He's up and walking around.  She doesn't look shocked or even all that weirded out.  In the morning they leave, to return to Jersey, without seeing the doctor (who pronounced him dead) and it is VERY clear that something is up with Dead Hugh.  He isn't talking, he's just following Anna around and staring at her.  Anna, on the other hand, still looks the same ol' bitch.

[Anna is trying to teach Hugh how to speak.]

Lovelock: How is it she knows what to do with a dead guy?

[Dead Hugh telepathically (?) tells Anna that he loves her…]

Lovelock: Did she hear that or just us?

Starkwell:  Why isn't she more shocked by the fact that he is dead.

[The older brother comes home, and tries to explain to Anna that Hugh is a walking corpse, possessed, and doesn't feel anything.]

Starkwell: And now he isn't surprised either?

Lovelock: I'd like to think that if I came across a walking dead person that I'd be calm like that, and be able to be all "let's go to a priest to EX-OR-CISE him.  EX-OR-CISE."

Starkwell: I think you'd scream like a little girl.

So then Hugh runs his brother's van off the road sending him to his death, and a chime plays, and it looks as though Anna knows about it already.  It's bizarre and unclear whether or not Anna is controlling him.  What is clear is that Anna is fucking nuts and kind of an asshole.  Then they do telepathic sex, I think.

[After celebrating the brother's death over breakfast, Hugh telepathically asks Anna to kiss him and then attempts to literally suck the life out of her.]

Lovelock: And that's why you never kiss a dead man.

Starkwell: Well, that could be one reason.

Lovelock: I hope he smashes her head in with a rock next.

Hugh comes after Anna, he's all decomposing and she slashes his face up with a candlestick.  He leaves and starts walking SLOWLY towards the lighthouse.  She follows him, also very slowly.  After carefully showing her one or two mile journey / slow walk to the lighthouse, Anna and Hugh walk hand in hand into the rising tide and drown themselves.  Yeah, and then the credits roll.