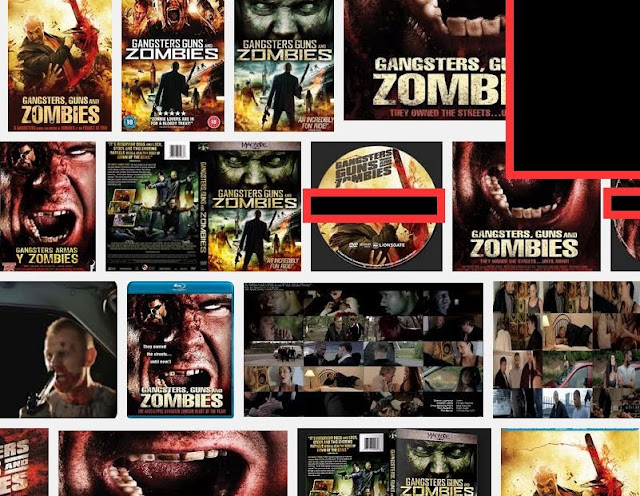 I already know how Starkwell and Lovelock feel about the recent onslaught of zombie comedies.  So, this recent flick is basically in trouble before it even starts.  Saying that it has received mixed reviews is probably being kind.  This film was released around the same time as “Cockneys vs. Zombies” which is also about a British gang of bank robbers.  Not sure who ripped who off, but I’m fairly certain both of them try and lift shit from “Reservoir Dogs” and/or “Lock, Stock”, but with acting and dialogue that is not as good.  We are immediately introduced to all of the main characters, who are on their first “job” robbing a bank, when there seems to be a zombie outbreak going on while they try and get Danny some help (he’s been shot).

[Boss Man Tony shoots a man in the head, then a girl gets eaten, then he shoots the girl and the guy who ate her.]

Starkwell: Shows a lot of heart.

It’s clear that the outbreak has been going on for a while, since no one seems shocked by the zombies.  Or people were prepared for it I guess?  It’s a bit of a plothole at this point, but maybe they’ll explain it later.

[The gang gets to the hospital to get Danny some help and kill a bunch of zombies.]

Starkwell: Are they going to flash words on the screen before every scene?  “THE HOSPITAL”… I mean… yeah we can see that.

[A minute later it flashes “THE SAFEHOUSE”.]

Starkwell: Well now, that was a quick ‘hospital’ scene.

Neither Lovelock nor Starkwell, nor myself for that matter really see any actual story yet, other than lifting a lot of ideas from either Guy Ritchie or Quentin Tarantino.

Lovelock: The girl getting eaten by zombie clowns was a nice touch.

Twenty minutes in, and it’s just been dudes driving in a van while showing random shots of zombie action.  Oh sure, they got out for a minute at the hospital, but then ran IMMEDIATELY back in when they were swarmed.

[Danny dies, so they finally leave the van to busy him, and have a mini funeral in the woods.]

Lovelock: What a nice group of gangsters.  Is Pat crying?

[They are suddenly swarmed by zombies… wearing old fashioned armor… ?]

Starkwell: Wait, did they travel back in time or something?

Lovelock: Yeah I know.  I was just trying to make it more interesting.  We’re hitting the forty minute mark and thirty five of those have been DRIVING THE FUCKING VAN.

Starkwell: LARPERS.  Must have been some serious zombie larpers.

We’ve gotten no back story on the characters, no character development DURING the film so far.  So really, it’s just random British dudes in a van.  But it’s well filmed and the zombie and gore stuff look fun.

Starkwell: It has become far too trendy for films to just have a shitload of characters and not develop any of them.  It doesn’t take talent to write a lot of characters into a story.  It takes talent to make them RELEVANT to the story.

Lovelock: Agreed.  This writing appears lazy to me.

Well, they meet an old bag and her hot granddaughter, and stay hauled up in their… windmill?

Lovelock: Nice to see them get out of the van.

[Immediate love connection between main guy ‘Q’ and the granddaughter.]

[Still no sign of a character that we actually give a turd about, but there ARE some decent jokes in the mix.  But then the grandmother charges the zombies and curses.]

Lovelock: At least it ain’t in the van.

With fifteen minutes left, NOTHING HAS HAPPENED.  Oh wait, they just spent like five minutes building a campfire.  So there’s that.  I haven’t seen Lovelock and Starkwell yawn this much in a long time.

[‘Q’ and granddaughter cuddle ‘round the campfire like soulmates.]

Lovelock: If only it were that easy.

Starkwell: Well, to be fair, it’s not that easy surviving on the run in a zombie outbreak.

Lovelock: Whatever dude.  It usually takes longer than a day to work up to that kind of cuddling.  ESPECIALLY in a zombie outbreak.

Then the movie ends as the surviving gang members and granddaughter escape the in a boat.  And ‘Q’ and granddaughter make out like crazy.  So… it took an hour and a half for nothing to happen.  Well, at least it ends with a blooper reel.  Who doesn’t love that.