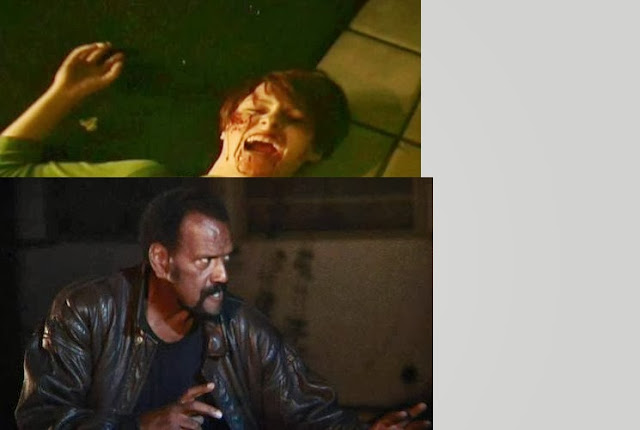 When someone says "cookie cutter zombie film", if anyone ever actually says that (okay, I say it, so I guess what I meant was "When I say "cookie cutter zombie film""), they are (I am) talking about shit like this.  And in this case, they made TWO movies.  How cookie cutter is it?  We've already watched TWO other movies called "Zombie Apocalypse".  So what better way to destroy Lovelock and Starkwell's hopes and dreams, then this crap?  It's gonna be a long night.

If the movie looks half as cheesy as the DVD menu, they are in for one hell of a shitshow.

[Some guy beats on another guy and the dialogue is horrible and sounds horribly overdubbed.]

Starkwell: Come on… another one of … what is that music?

[Guy who is tied up kicks a zombie onto the ground.]

Lovelock:  I agree that this looks terrible, but I think that stunt double really must have gotten a concussion from that fall.  It looked horrifying.  I give the film some points for that.

The intro is full of stock footage from news broadcasts.  It looks bad man.  Bad.  And then we are introduced to some characters that are in… college?  They look EASILY thirty five.

[Chunky Goth Girl gets fired from her video store job.]

This movie is complete nonsense.  For example, the two main guys stop in the middle of a street and out of nowhere a girl runs into the shot and is like "Hey, I heard your tires screech!".  Between that, the bad dialogue and the shitty acting and the shitty special effects… Starkwell called it quits twenty minutes into the first film.  Lovelock is in it for the long haul… and what a long haul it is going to be…

Lovelock: The movie looks like a cheap film from the early nineties.  I don't know how it is even possible that it's only a year or two old.

Lovleock: Holy shit, we get it, you liked "Agent Smith" in the "Matrix" films.  Fuuuuuuuuuuck you.

Then there was "everyone grab weapon" scene that was somehow even lamer than most of them are.

[Girl asks for a cigarette as they go to fight zombies, claiming "now seems like a good time to start smoking."]

Lovelock: Seriously?  Now is like the worst time to start smoking.  Plus she's all chunky, so running must already be hard.

The main characters get captured by some kind of militia.  Each person is a terrible cliché.  There's GUY IN GAS MASK, Cowboy Guy, Bow and Arrow guy, and of course, ARMY FATIGUES.  Considering the outbreak has been going on for a couple of hours AT MOST, it's even dumber than usual that there would already be a group of bandits operating as some sort of army, acting like they've been together for years.

Lovelock: Wait… when did that guy cut his hair?  And why does his accent keep changing?  Why BOTHER with fake accents when no one can act?  Why do these FUCKING movies always make that mistake?

Anyways, Lovelock obviously hates it, and is REALLY working hard to not to leave.  He manages to stay awake until the end of this one, we'll see what happens during part two… It looks like the kind of thing where if you KNEW the people that made this thing, you'd still hate it, but at least have fun laughing at it.  For everyone else, it manages to escape even the "SO BAD IT'S GOOD" territory.

Lovelock: Wait a bit before you start the next one.  I have to go do a serious dump.  I think it was brought on by the last ninety minutes.

You got to hand it to the film makers in that, they had the balls to make not one, but two of these… and somehow get Fred Williamson to be in the second one.  But sometimes less is more.  Or, as Starkwell would say, sometimes none is more.  Starkwell came back into the room as this one starts up though, just so you know.

Starkwell: While I can appreciate the vibe they are going for, I can't help but feel like they are about to disappoint me.

Lovelock: Clearly this opening music is going to be the high point.

[They're not lying, it's very Gianni Rossi inspired.]

The budget looks considerably higher for this one, at least initially.  We are treated to a nice scene of a dude stranded in a desert, pissing on his own bandana to keep himself cool… ?  Or hydrated?  He is eventually found by three random people who rescue him, and then it cuts to some sort of Mad Maxian society, where they have put some dude on trial for treason, and they set him on fire.

[Fred Williamson is the leader of the crew that saved desert dude.]

Lovelock: His name is Moses?

Lovelock: That is racist, dude.

It's pretty clear that they are going for that whole fake grindhouse thing.  It CAN work, but often doesn't.  Fred Williamson is helping make it almost work in this case.  The main character is named KNOX.  He's wanted by the Evil Mad Max Society People.  Good thing he was rescued by the Seemingly Good Society of Wandering Weenies.

I understand, as I said, what they are going for… but we could ALL do without the long pauses between EVERY line of dialogue.  Surprisingly the acting is decent, definitely "cheesy on purpose" but it works.

Starkwell: LEAPS AND BOUNDS over the first movie, I must say.

Starkwell: No.  Very much no.

The film quality is giving both guys a headache… half of the screen is always blurry.  It's like one of those fucking Instagram options.

Lovelock: When I survive the zombie apocalypse, remind me to NOT be one of those douchey looking guys wearing hockey equipment.

Cheesy and pretty stupid, still, there's something likeable about the characters.  Not enough to save this film, but enough that Starkwell hasn't left yet.

[Knox sits out looking at the stars.]

Lovelock: I have that same damn lawn chair.

[Knox and Sarah get close and cuddly.]

Lovelock: I think I want the apocalypse to come... seems like it's way easier to hook up with girls.

Starkwell: What are the odds that a pregnant zombie woman and man would have survived in an abandoned warehouse, all alone in a room in the back, and then had the baby, turned to zombies, BUT THE BABY DIDN'T, and then they begun eating said non-zombie newborn EXACTLY when Knox and Fake Kurt Russell happened to get there?

Lovelock: Pretty good I guess, since it just happened.

Starkwell: Wrong.  The odds are terrible.  Worse than terrible.  They are the worst odds of all time.

Lovelock: So what you're saying is that they beat the odds.

Starkwell: What? No. Fuck off.

Lovelock: Against all odds...

[Then Lovelock went into a five minute venting session about the importance of consistency with regards to the zombies in these films, because ALL OF A SUDDEN the zombies were running.]

Then both Starkwell and Lovelock laughed for five minutes when the "raiders" showed up at the good guy camp because of, well, a few things that happened.  The "raiders" knocked down the good guy gate with grappling hooks, even though it clearly wasn't even being held up by anything.  Also Lovelock is pretty sure that the "stunt men" were hitting each other with Nerf bats.  And then to top it all off, Fred Williamson randomly strikes karate poses.

Lovelock: Fred Williamson karate beats anything you got.

[Then Fred Williamson gets a minigun and it's way lamer than the karate moves.]

Anyways a few montage type sequences go by, and one dude is trying WAY TOO HARD to look like Kurt Russell Snake.  But I guess three of the main dudes are going on a rescue mission.  Then they rescue them and blow up the bad guy headquarters, which is actually a huge church.  Lovelock and Starkwell seem mostly, well, just bored.  And that, as they say, is that.  There's even a Princess Leia strangling Jabba reference near the end.  Trying WAY TOO HARD, and totally out of place.  Fred Williamson disappears halfway through the movie too… BUT THEN MAKES A COMEBACK AFTER THE CREDITS!  I assume it's because they only had him for a day.

Lovelock: Did they make a third one?  Can we not ever watch never ever?

So yeah, not really a glowing review.  Redemption was an improvement, but the film makers have MILES to go.