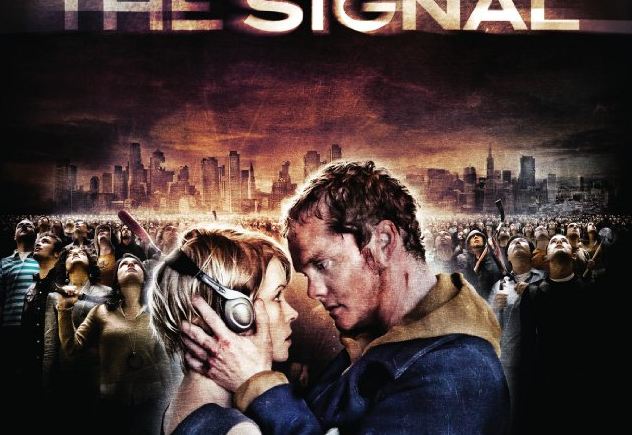 A film apparently consisting of three segments, each one from a different director, all telling the same story, just from a different perspective.  Sounds like a cool idea, but considering it looks low budget as all Hell, we’ll see what the can pull off.  The cover looks all high budgeted but that is something (“Hey, the cover looks cool…”) that has burned us many times before.  One of the directors eventually went on to be a part of “VHS”, and the rest all seem to have been involved with other anthology films.  Is the next generation REALLY so A.D.D. that they need all these anthology films?

[Film opens with a slasher killing people, then the picture gets all fuzzy and looks all scrambled for a solid chunk of time.]

Lovelock: NO not you!  Movie! You broke it, movie.

[Cuts to a TV in a guy’s bedroom showing the scrambled image.]

We are introduced to a guy (butt guy, named Ben) and his girl (a married woman, named Maya).  Well the film is trying really hard to develop characters.  You gotta hand it to them, but everyone (Starkwell and Lovelock) are starting to get the impression that, given the film’s slightly longer than usual runtime, that there will be a fair amount of pacing issues.

Starkwell: Who still uses a discman?

Lovelock: And with the headphones that CAME with the discman?

After leaving the dude and listening to his CD MIX on the way to her car, Maya is confronted by two crazy people with blood all over their clothes.  Also, her cell phone isn’t working right.  The signal seems all crazy and distorted.  She gets home to her husband, Lewis, and his two friends.  It’s pretty clear in about five seconds why she would want to leave this angry piece of shit.

[Lewis beats one of his friends to death.]

Lovelock: The question isn’t why she would leave him, it’s why she hasn’t left him yet.

Starkwell: To be fair, I’m pretty sure he has gone all homicidal and it’s out of his control.

Starkwell: No, but, I mean something is making him that way.

Lovelock: Maybe he was born with it.

Starkwell: Well since everyone else in the building is going around hacking people up, it’s safe to say that something contagious is in the air.

[Girl waits until the coast is clear, puts her discman on and walks out.]

Lovelock: You can’t even put it in your pocket!  Someone get her an iPod, or at least a dollar store mp3 player…

Anyways, Maya escapes her building and is determined to get to TERMINAL 13 where she is hoping to meet the dude she is banging, not her husband, obviously.  The dude she is banging, Ben, went to find her, and it appears that now, crazy Lewis has captured Ben as he arrives at Maya's building, to NOT find Maya.  Begin… segment two?

Starkwell: The problem is, each segment has the same characters and world, so when the vibe shifts completely, it feels a little schizo.

[Then Starkwell felt great shame, as Lovelock made a fair observation.]

[Lewis seems to be crazy with jealous rage, but not sure if he has THE crazy.]

Starkwell: If he is not crazy, why did he beat his friend to death?

Lovelock: Maybe he WAS born with it.

Anyways, this whole segment is mostly at some house where a husband and wife were expecting party guests.  Then the comedy stuff goes away and it gets all intense again.  I guess there are different levels of the crazy being manifested herein.  In all cases though, it results in people murdering the Hell out of other people.  Onto segment three…

[Ben is still alive and he shows up and beats the shit out of Lewis.]

Starkwell: Does he have the crazy or… ?

Ben finds out that Maya was heading for Terminal 13 so he and Clark (one of the party guests) heads off to go find her.  It’s pretty obvious that both Ben and Clark are infected, but they keep each other in check pretty well.

[Ben finds Maya, but guess what, Lewis is alive!]

Lovelock: That’s why I always finish the job.

Starkwell: Yeah, that’s why.  Wait what?

The end gets all twisty and I think it didn’t do much for Lovelock and Starkwell other than confuse them.  But I’m pretty sure Ben saved the day and now he is reunited with Maya.  Or not?  Seriously, movie, make up your fucking mind.

Lovelock: Am I supposed to decide what happens next?  What the fuck?  I watch movies to avoid making decisions.  That blows.

Regardless of the filmmakers refusal to make a choice, they moderately enjoyed this one.
Documented by Kev D. and Posted at 08:25