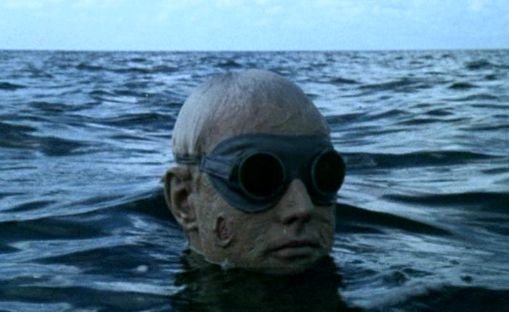 I can't really be sure if you could say that this is the original Nazi Zombie film, especially not if you count something like "They Froze Hitler's Brain".  And certainly Zombie Soldiers had previously been tackled.  But "Shock Waves" did that with Peter Cushing, so COME ON that must get it some extra brownie points.   Anyways, this was essentially cloned two more times with "Oasis" and "Lake", so let's see what all the fuss was about.

[Narrator explains that the Nazis did experiments on corpses, to create SUPER SOLDIERS, and that this squad of invincible soldiers was NEVER CAUGHT.]

Lovelock: Is that the same things as shitting in your pants?  Because if so, I just had explosive goose bumps.

After the opening credits roll, it cuts to a woman floating out at sea on a rowboat, and being rescued by a fishing boat.  She narrates the story, and begins explaining, as they begin showing just how she got there.  In the flashback, she's on a boat with Captain John Carradine and some dude with a crazy mustache.  I think there are lots of other people too.

[There is a married couple, and an old crotchety cook, and dude who seems to like making castles with cards.]

Lovelock: If that cook saves the day, then this it TOTALLY where "Under Siege" got all of its ideas.

Starkwell: I don't see that happening.

Lovelock: Why are they on this boat?

Starkwell: I don't think it is to find undead Nazi super soldiers…

Lovelock: But that is EXACTLY what they're going to do.

Then they run into a huge ghost ship that appeared out of nowhere, and then disappeared seemingly into thin air.  In the morning, they row to a nearby island.  Carradine seems to have disappeared.  Then they find him, dead. They walk the island and find an old abandoned hotel resort of some kind.  There they meet Peter Cushing.  I can't tell yet if he is a good guy or a bad guy.

[Zombie walks around on the ocean floor and then pops out of the ocean.]

Starkwell: So… he was just hanging around the coral reef?

Lovelock: Probably looking at the fishies.

Starkwell: Apparently looking at the camera too.

[Nazi Zombies rise up out of the water and walk onto shore.  The cook goes out to fish up some food and one of the zombies drowns him.]

Lovelock: There we go.  Off to a good start.

[The rest of the group find his body and see two of the zombies slowly walk away.]

Starkwell: Wouldn't they be hiding or something?

Lovelock: They're not ninjas, guy.

Peter Cushing seems to be a good guy, NOW, in the sense that he tries to warn them and tells them they need to leave.  But he does explain that he is the one that created the super soldiers during the war and has tried to keep them on this secluded island, hidden way… but says that they are now ON THE LOOSE and out to kill.  Then he runs into the forest and one of the zombies drowns him.

Lovelock:  SO… MANY… underwater shots.

There was a scene where nerdy guy named Norman was surprised and drowned without making a peep.  Lovelock shouted out "quietest death ever" and then both he and Starkwell laughed for five minutes re-watching the scene several times.

[Main character Rose takes off one of the zombie's goggles and he dies immediately, because of the sun… I think.]

Lovelock: Some super soldiers… they can't take their goggles off?

Starkwell: Was this thing filmed in a library?  People are being attacked and dying and zombies are dying and LITERALLY no sounds are being made.

Lovelock: Those goggles must be seriously awesome.

Starkwell: They don't have guns, and move real slow.  Just run up to them and take their goggles off.  How hard is that?

Lovelock: You'd think if the scientist can create a super soldier whose only weakness is LIGHT, he'd figure out a way to make those goggles more permanent.  Those elastics are usually flimsy.

[The Nazis continue to hunt/drown the survivors.]

Lovelock: So the only way they know how to kill people is drowning them?

Starkwell: Doesn't seem like a very threatening force.  Pretty useless in a gunfight… How could they have been a death squad in World War 2?

Lovelock: Maybe they used to carry around buckets of water.

[They drown one guy in a pool, the other girl in a fishtank.]

Lovelock: Lucky for them there was a fish tank in that room… otherwise where would they have drown her?

Starkwell: Why would he have been walking in the pool?

Lovelock: "The zombies seems to hide in the water… so I think I'll go for a swim."  These people are all getting what they deserve.

Then Rose sails off in a rowboat.  The end.  Lovelock made some jokes all throughout about this being where "Lost" got all of its ideas, but Starkwell and EVERYONE ELSE agrees that it makes no sense to say that.  Lovelock likes to think everyone is ripping everyone off.