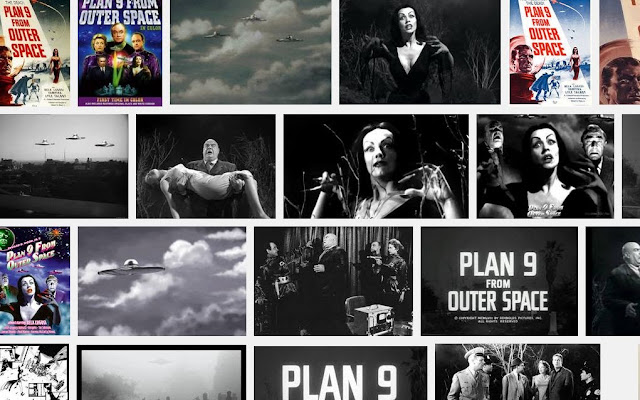 People can say all that they want that this is the WORST film ever made.  But if that really were the case, it would have simply been forgotten long ago, like so many films that are far and wide much worse than this delightfully bad stroke of genius.  Starkwell and Lovelock have been itching to see this one, and I figured it was as good a time as any to introduce them to Ed Wood and his piece de resistance.  After navigating the INSANELY shitty and confusing DVD menu, I eventually think I get the movie started, but then realize that it’s a preview… for the movie I am about to watch.

Lovelock: I don’t know but this credit sequence is totally fucking LIGHTNING.

Too much has been written about this film and the infamous director for me to dive too deep into the details, but suffice to say, as the story begins to unfold, they are pleasantly confused.

Lovelock: Lugosi got old.  That makes me sad.  I wish he could have lived forever.

Starkwell: Wait, that voice is a narrator?  I thought it was someone reading the eulogy…

I can’t explain how much the ‘cockpit of an airplane’ set made them laugh.  And then the flying saucer shot took it over the top and Lovelock shot milk out of his nose.

[Vampira comes out all zombie-like and does jazz fingers.]

Lovelock: Who was that screaming?

At least Ed Wood understood that without a narrator explaining EVERYTHING, no one could possibly ever understand what in the Hell is going on.  But Vampira is Lugosi’s undead wife, and Lugosi just died.  I don’t know why she killed the grave diggers, but I assume they were the ones who screamed just before.

[UFO flies by and knocks everyone over.]

Lovelock: “Places everyone, places!!!  One… two… three… JUMP AWKWARDLY DOWN INTO THE GRASS!”

[Then Zombie Lugosi and Vampira jazz finger and cape him to death and Lovelock did a jumpkick.]

Then flying saucers are seen flying over , and they show it for five or so minutes.  They repeat “sauces seen over [blank]” about a hundred times, and they keep showing people reading the same headline.  In case it wasn’t clear enough, the narrator is REALLY pounding it into our heads that SAUCERS WERE SEEN OVER BLABLABLA.

Lovelock: I’m not sure, did anyone else notice the saucers?

Starkwell: I think they did, and it’s certainly taken them a long time to try and hit them.

[Then the saucers get away.]

Sometime after this, we get to see the aliens!  They’re just humans in shiny clothes.  Then one of the alien actors reads from a script that he holds in his hand.

Lovelock: Why would the head alien have the symbol of an axe on his shirt?

Starkwell: I don’t know, but the mother ship looks like a huge breast.

Lovelock: Well, it IS the mother ship…

There’s a pilot guy (and his wife) that the story seems to be focused on, and Lugosi shows up to kill her while he is away flying after the saucers.  Actually, I don’t think it’s actually Lugosi, I think it’s a guy covering his face with a cape trying to look like Lugosi, since Lugosi died a couple of years before this film was made, BUT, it’s the Lugosi CHARACTER that is in fact chasing her into the cemetery.

[Tor Johnson RISES from the grave.]

Lovelock: Worst movie ever MY ASS, did you see that fucking rise from the grave scene?  SWEET SASSY MOLASSEY!

[Lovelock wasn’t listening, he was too busy playing air guitar.]

Then the girl is rescued from the side of the road by a cowboy in a Cadillac with the BIGGEST ASS I have ever seen.  Lovelock actually paused it to marvel at just how tight his jeans were.

Starkwell: I love how obvious it is that Vampira, Tor Johnson and Lugosi were clearly never filmed at the same time, since all the shots of them are of them alone, and seem randomly placed and totally fucking schizophrenic.

[Cut to a shot of Vampira and Tor zombie walking side by side.]

Starkwell: Whatever dude.  That single shot of Lugosi was in the daytime, and now it’s night again IMMEDIATELY.

Lovelock:  Face it, you just suck dude.  You’re the worst and this movie is the best.

Starkwell: Someone should tell that Detective not to use his loaded pistol like a pointing stick.

Meanwhile in the Pentagon, stuff happens, and Lovelock and Starkwell continue laughing at this movie.

[Zombie Tor Johnson turns on the aliens, starts to choke one of them.]

Lovelock: Wait… how was he on the spaceship?

Starkwell: How did throwing the gun on the floor stop him in his tracks?

[So many questions, so few answers.]

Lovelock: The head alien guy is ALWAYS clearly reading off of something.

I lost track of the plot, or the Plan 9, if you will.  But when Lugosi comes after the whole gang of characters that appear to be having a potluck dinner, laughter was had by all, especially when the Detective stood up, and somehow his chair FLEW, and I mean FLEW, off the set.  It was magical.

[Detective unloads his gun on Lugosi.]

Lovelock: Why is everyone else just standing there?  Isn’t that guy in army?

[Some kind of electro signal drops Lugosi like a fly and he turns into a pile of bones.]

We still are pretty unclear on the Plan.  What is it?  Why is it the ninth?

[Tor kills a guy by… swinging his arms near them?]

Lovelock: Did the wind of his swing just blow up his head or?

Starkwell: Maybe he just died of a heart attack at the exact time that Tor swung his arms.

Then they find a flying saucer that, when on the ground appears to be rectangular, and basically a house.

[Alien says “all of you on Earth are idiots”.]

[The alien explains that humans are super self destructive and that soon they will develop SOLAR RAY BOMBS that will explode the Universe.]


Then it gets really crazy, where the aliens refer to God.   Honestly, I feel like maybe the aliens are good guys at this point.  Screw the Earthlings.  After some explosions and some flaming flying saucers, we cut back to the narrator, who we haven’t heard from in a while, and he says that all of this was true OR WAS IT?  What a wild ride.
Documented by Kev D. and Posted at 13:36