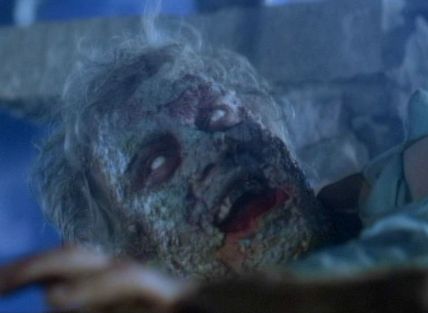 [Narrator talks about God and Lucifer and angels and shit.]

[Priest in a rowboat paddles to an island castle.]

[Priest walks through a gauntlet of hanging dead things, including a naked guy.]

Lovelock: Is the priest staring at his junk?

[Starkwell resisted the obvious joke... then a Possessed girl falls from the ceiling, priest clubs her head in.]

[Priest chases some shirtless guy with long teeth and huge sideburns who keeps growling at him.]

Lovelock: Is Lucifer humping that tree?

[Lucifer turns into a young girl, and then back to a middle aged man, then the priest impales him.]

Starkwell: What was with the young girl? Why… ?

[Opening credits roll… this is gonna be one nutty ride.]

After making fun of the bad overdubbing for a minute, Starkwell and Lovelock settle in, ready to watch, and subsequently ridicule, the film.  We find ourselves back in modern times and are following a family as they bring their newborn for his baptism.

Lovelock: That’s why I won’t baptize my kid…

Lovelock: On a side note, why did they cast two old fogies to play the parents of the newborns?  They’re like seventy-five!

Anyways, they seem to hate their demon baby, as the demon baby Andrew starts tearing them apart!  Then we flash forward eighteen years and Andrew is all grown up and somehow they’ve remained married.  And they haven't killed the kid.

[Andrew turns himself invisible and walks down to the dinner table, the parents are all surprised that he is sitting there.  They didn’t see him come down.]

[Husband gets in a fight with his wife over the birthday cake they just dropped.  He punches his wife in the face and then an iron falls on her head.]

Starkwell: Wait, so… is she dead?

Lovelock: The parents don’t need much help from Demon Baby to be fucking horrible.

Lovelock: Is that the Boomtown Rats playing?  TELL ME WHY!  I don’t like Mondayssssss…

I can’t keep up with them anymore.  There is just so much SHIT going on here.  This is one eclectic, messy and schizophrenic cinematic experience so far.

[Student pulls something out of his pants zipper and uses it to open a car door, and then he drives away in the stolen car?]

Lovelock: The window was open. Why would he need that tool from his crotch?  That CROTCH TOOL, if you will.

[Just one example of how DUMB this shit is.  Then the bad boy from class Tony slaps his girlfriend INCREDIBLY hard and it looked real.  This was immediately after he banged her in the boiler room.]

Starkwell and Lovelock seem as confused.  I think that a bunch of the characters are reincarnations of angels.  But, they seem to know who they are?  Or they seem to not know who they are?  But no one knows that Andrew is Lucifer?  Honestly, I’m not entirely sure.  I think the Kelsey Grammer priest is/was their neighbor’s brother?  In a previous life?  Andrew seems to know that he is Lucifer.  If he is Lucifer, that is.

[After gym class, all the guys hang out naked in the shower and bad boy Tony decides to mess with Andrew by… kissing him… Did I mention that they are all in the shower?  Naked?]

Starkwell: So… much… full male frontal…

Lovelock: This is making me more confused.

Lovelock: No, I mean, I don’t understand the point of that scene.

Sometime after dreaming that Andrew sexed on her briefly and then scratched her, Girl wakes up and sees that the scratch is REAL.  More importantly, though, she had a poster of Brian May on her wall, which is way awesome.

Lovelock: Totally underrated as a guitarist.

[Kids play Dodgeball, coach throws ball at kid, Andrew makes it speed up, and kid’s insides explode and he dies.]

Now it starts getting even more confusing.  I think Kelsey Grammer Priest is inside of Dream Girl now.  When it comes right down to it, though, nothing has actually happened in the first hour.  And where are Andrew’s parents?  Are they dead now, or… ?

All throughout, the music has been as all over the place as the plot.  It jumps from shitty early punk to bad pop to badly orchestrated bullshit.  Finally, after a super over acted monologue where he’s shaking and waving his arms like he’s singing a showtune, Andrew starts raising the dead and we get some zombies.  They growl and pretty much look like they have oatmeal all over their faces.

Lovelock: Better than nothing I guess.

[The whole town is gathered to watch the Passion Play.]

Lovelock: At least they’re all in one place.  Maybe we’ll get some decent carnage.

Some of the teens venture to the castle and the zombies start eating them.  Meanwhile, the Passion Play, magically turns real and the actor playing Jesus is full crucified and blood starts shooting all over everybody.  Also Andrew’s Dad blows his wife’s brains out for some reason.  Tony opens his shirt and has breasts.  Then Andrew shows up and Tony stabs himself in his new breasts.  Andrew is dressed like a really gay vampire.  Then he turns into a full demon and Dream Girl melts him with her magic staff in a whirlwind of bad special effects and lazy writing.  Sounds bad?  You don’t even know.  YOU CAN'T IMAGINE.
Documented by Kev D. and Posted at 20:17